There is a poetic saying”Kuffar Toota Khuda Khuda Karke”. The 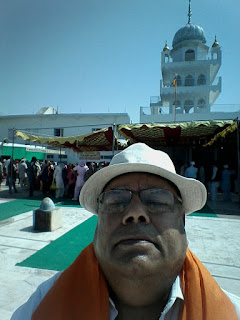 Punjab government has finally woken up to recognize and respect Guru Ravidassji by building a memorial at Khuralgarh, a site at Garhshankar in Hoshiarpur district of Punjab. It is believed that Guru Ravidassji visited and stayed at Khuralgarh which was then a princely state of one of the close relations of Mira Bai who herself was an ardent spiritual follower of the great Guru. This historical fact has been confirmed and authenticated by the concerned governmental authorities on the initiative of a community activist Banta Ram Ghera. There are two sites – one in Khuralgarh village where Guru Ravidassji stayed and meditated and second at the foothill where Guru Ravidass struck water with the toe of his foot on the request of the villagers. That place, since then, is called ‘Charan Choh Ganga’. Obviously, Khuralgarh has become a historical pilgrimage for the millions of followers of Guru Ravidass both in India and abroad. Thousands of faithful followers visit Khuralgarh daily to pay their obeisance to their Guru. The picturesque place is increasingly becoming a tourist attraction in the region, in spite of the fact that there is hardly any development of the needed infrastructure and civic amenities created and extended by the government authorities. The two sites, that is, the Gurudwara at the village Khuralgarh and the Charan Choh Ganga are manned and managed by two separate private trusts. There is no consultation and cooperation between these trusts rather, as I gathered during my recent maiden visit to Khuralgarh, they are fighting with each other and also other vested interests who intend to gain control of these holy sites. The authorities have been silent spectators resulting in criminal neglect and no development and care of the important historical inheritance of the millions of followers of Guru Ravidassji.

The central government, on the initiative of then Minister Ambika Soni, identified Khuralgarh as a tourist destination some years ago. A tourist guest house was built but it was of no use. In the absence of matching infrastructure like approach road and other amenities, this guest house is almost an abandoned building, as I could see myself.

The Punjab government, at the time of last elections about four years ago, with a view to woo dalit votes, showed interest in Khuralgarh. But it was only an election plank. The momentary enthusiasm died its natural death. I wrote to the Culture Secretary sometime in 2013 and offered my services to do something concrete and positive for the Khuralgarh plan. He referred my humble offer to the then Minister Sarwan Singh. As I did not have any political back up, my offer could not find favour with the honourable Minister. The Akali-BJP coalition government did not do anything on the Khuralgarh project. Now the elections are fast approaching. Khuralgarh has again occupied the attention of the government to encash their cheque on the vote bank of the followers of Guru Ravidassji. The seasonal birds have surfaced again with their love for the great guru and spiritual well being of his followers. A grand plan to build a state of the art Guru Ravidass memorial at Khuralgarh, at the cost of 110 crores of rupees, has again been put on the drawing board. At the foundation laying ceremony on April 3, 2016, CM Parkash Singh Badal said “As a tribute to Guru Ravidass, it will be an architectural marvel with a 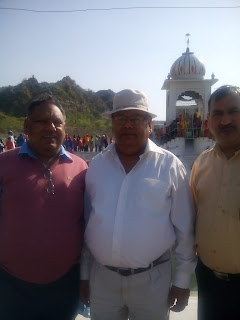 congregation hall for 10,000, a modern auditorium for an audience of 500 and 151 feet high Minar-e-Begumpura.” The purpose of the memorial is said to establish ‘a sacred place associated with Guru Ravidassji as a world class centre to propagate the message of divinity, communal harmony, peace, universal brotherhood and compassion’. The importance of Guru Ravidass and his followers has appeared in the psyche of the government once again. That is why I said “Kuffar Toota Khuda Khuda Karke”. Let us see how much is done at Khuralgarh before the election. After that the drawing board will be shifted to some junk store to gather dust till the next elections.

All the major players in the great political game are busy in wooing the dalits to gain their support and votes. In the process, they are undertaking and employing all the tricks and tactics not that there is any love lost or they are interested in improving their position or empowering them as equals but only to befool them to get their votes. This is the 10th year of the Akali-BJP government in Punjab, maybe the final year before they are thrown out by the upcoming political forces like the AAP. What have they done for the dalits?  Dalit icons Guru Ravidassji and Dr. B.R. Ambedkar have suddenly appeared on their radar. Have they budgeted any definite amount to be spent on the Khuralgarh project? Have they fixed any timeline to complete the project? Have they put in place any special outfit to see the execution of the 110 crore Khuralgarh project? What special programme have they made to celebrate and observe the 125th birth anniversary of the greatest son of India, Dr. B.R. Ambedkar? I wrote to the Deputy CM of Punjab on the subject some months ago but there was not even an acknowledgement.  Again surprisingly, I read a story in the Hindustan Times that MOS Vijay Sampla has mooted a proposal to make a world class memorial of Dr. B.R. Ambedkar at Bootan Mandi, the so called capital of dalits. I, a humble Bootan Mandian, welcome the proposal. But I am certain that the proposal will remain a news item only.  I will write on this subject separately.

My dear dalit brethren, kindly watch out for the emerging scenario and marshal your forces to safeguard your interests in this great game otherwise you will again be cheated.
Posted by ramesh chander at 8:44 AM