The Indian democracy, in its adolescence after 65 years of adoption of the constitution, seems to be in danger, if one goes by the 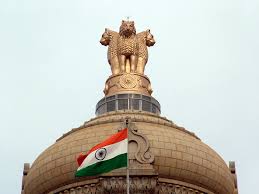 prevailing political and social environment in the country. The increasing intolerance in general and increasing tendency to adopt unconstitutional methods to articulate or register ones point of view, of late, have become order of the day. It is an anti-thesis of democracy. President Pranab Mukherjee had to pin-point and observe repeatedly that these growing tendencies were not good for the democratic edifice of the polity and social fabric of the society. He candidly and rightly said on October 7, 2015 while releasing a book at Rashtrapati Bhawan, “We must remain true to the core values of our civilization” and reiterated it in Birbhum on October 19 and expressed apprehension whether tolerance and acceptance of dissent were on the wane. He said, “Humanism and pluralism should not be abandoned under any circumstance.”

Ever since India became Independent in August, 1947 and a Republic in January, 1950, one of the major failures in the polity of India, to my mind, had been that polarization of political forces could not happen on the basis of ideology or political agenda, the very basic requirement for the functioning of democracy. Society could not be transformed on the principles of liberty, equality and fraternity, the lofty ideals enshrined in the constitution. The much needed casteless society could not be established, as envisaged by our fore-fathers, especially father of the constitution, Dr. B.R. Ambedkar. On the contrary, it seems, the country is heading in the wrong direction.

The recent incidents and happenings pertaining to the behavior of

Shiv Sena to stop the concert of Pakistani singer Ghulam Ali in Mumbai, to protest the release of the book of Pakistani leader Khurshid Mahmud Kasturi in Mumbai and blackening the face of a renowned columnist and intellectual Sudhendra Kulkarni and barging into the office of the President of BCCI, Shashank Manohar, in Mumbai to protest against the visit of his Pakistani counterpart, Sharayar Khan are the latest examples of undemocratic behavior of the political outfits. These are the “unconstitutional methods” referred by Dr. Ambedkar in his last speech in the Constituent Assembly on November 25, 1949. He termed these methods as “Grammar of Anarchy” and said, “If we wish to maintain democracy not merely in form, but also in fact, what must we do? The first thing in my judgment we must do is to hold fast to constitutional methods of achieving our social objectives.”

The second biggest problem is increasing social and personal intolerance. It is the very negation of democracy and healthy society. The recent incident at Dadri in UP in which a Muslim was lynched to death at his home on rumours that the family had consumed beef. A  J&K MLA, Engineer Rashid, was beaten by the BJP MLAs in the Legislative Assembly on the allegations that he flouted the “Beef Party” he hosted. Again at the Press Club in New Delhi, the face of Engineer Rashid was darkened and was not permitted to hold his press conference by his fundamentalist Hindu opponents.  Punjab is again on the boil on the issue of desecration (Be-adbi) of Guru Granth Sahib, the holy book of Sikhs. Though atrocities on dalits are a common feature of our social attitude yet the recent incident in which a dalit home in Faridabad was set ablaze and the family burned alive, has added fuel to the fire. The issue of reservation for the SCs, STs and OBCs has not been handled correctly by the successive governments and the society at large. The upper castes stand against these empowering provisions without understanding the issue and the sensitivities of the under-privileged and socially marginalized. The political and social outfits have no will-power to address the issue and educate the upper-castes who felt, though wrongly, cheated and harmed. The society is totally polarized on communal lines though India is supposed to be a secular state as stipulated in the preamble of the constitution and the often repeated pronouncements from the high-tables of various fora that India stands for universal brotherhood on the basis of “Vasudevkam Kuttumvakam” – the whole world is one family as enshrined in our scriptures. These lofty pronouncements do not hold good any longer. We have proved ourselves otherwise and it is a pity. The politics of hatred has taken over. It is evident from the treatment meted out to prominent thinkers like Narendra Dabholkar, Govind Pansare and M. Kalburgi in the recent times.Dr. Ambedkar in his concluding speech in the Constituent Assembly explained how India lost her independence and expressing his anxiety said, “Will history repeat itself? It is the thought which fills me with anxiety. The anxiety is deepened by the realization of the fact that in addition to our old enemies in the form of caste and creeds we are going to have many political parties with diverse and opposing political creeds. Will Indians place the country above their creed or will they place creed above country? I do not know. But this much is certain that if the parties place creed above country, our independence will be in jeopardy a second time and probably be lost forever. This eventuality we must resolutely guard against. We must be determined to defend our independence with the last drop of our blood.”

It is time to sit and ponder over these ground realities, if India is to remain a country of our liking.

Posted by ramesh chander at 9:57 AM