The Postal Department of the Government of India issued on 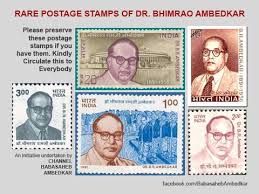 September 30, 2015 yet another postal stamp in commemoration of 125th birth anniversary of Dr. B.R. Ambedkar, the greatest son of India in the contemporary times. According to the information gathered from the internet, it is the 7th postal stamp issued in honour of the great leader. The title of the recent stamp is dedicated to Dr. B.R. Ambedkar and the Constitution of India with a view to remember Babasaheb’s contribution in framing the constitution of India which was the first onerous task after Independence of India in 1947. An official statement said, “It is aimed at making the world aware of his work 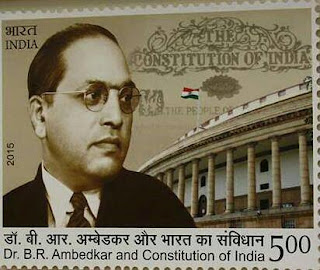 as a champion of the under-privileged.”

The Postal Department of India, which issued its first stamp on November 21, 1947 depicting the flag of India after independence, issued various stamps on Dr. B.R. Ambedkar with specific backgrounds and mottos. The September 30, 2015 stamp is dedicated to Dr. Ambedkar as the father of the Indian constitution. The official citation of the stamp issued in April, 1973 stated, “Dr. B.R. Ambedkar belonged to the traditional progressive social thinkers in India – the tradition of Raja Ram Mohan Roy, Mahatma Phule and other.” The stamp issued in April, 1991 showed yet another facet of Babasaheb’s struggle – the satyagarha of Chowdar Tank. The official citation termed the great leader as, “Dr. Bhimroy Ramji Ambedkar, the chief architect of Indian constitution and Champion of Human Rights.” With a view to 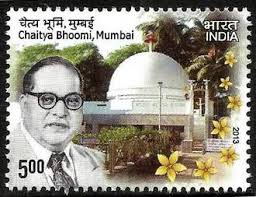 observe December 6, 1956, the Mahaparinirvana (death) of Dr. Ambedkar, a stamp was issued with the background of Chaitya Bhoomi where Dr. Ambedkar was cremated.

With the release of the stamp, the programme to celebrate and commemorate Dr. B.R. Ambedkar in his 125th anniversary has been set in motion. There will be many more events in the months to come. Let us hope that these events and activities do not remain hollow gestures. Dr. Ambedkar’s life and mission is so important and potent that we all Indians should learn and join in the task of nation building. That will be the correct homage and tribute to the great leader, Dr. Babasaheb Ambedkar

Posted by ramesh chander at 3:44 PM