Today, August 15, we are celebrating 69th anniversary of our 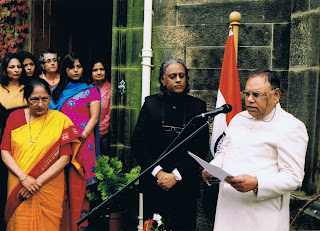 independence.  While we are still a nascent nation and we rejoice on this big day in our national life, it is time to sit and check the balance sheet and contemplate on the gains and losses, if we intend to do justice to ourselves and our motherland. At the dawn of freedom, PM Jawaharlal Nehru said, and rightly so, “Long years ago we made a tryst with destiny, and now the time comes when we shall redeem our pledge, not wholly or in full measure, but very substantially.”The question is: have we redeemed the pledge? No, I don’t think we have. It is a pity. PM Nehru further said in his famous “tryst with destiny” speech, “Freedom and power bring responsibility.” It seems that we intend to enjoy freedom but are not inclined to undertake responsibility. Something is amiss and shall be set right. Let us celebrate the Independence Day with this thinking that we are to set the things right.

The current political scenario in the country is not encouraging. The temple of parliamentary democracy i.e. Parliament is not allowed to function. The level and tenor of political discourse in the parliament and otherwise has been reduced to almost zero. Political propriety and morality which are essential unwritten fundamentals of democracy have been completely forgotten by our politicians and political parties. Our fore-fathers particularly Dr. B.R. Ambedkar gave full weightage to these lofty ideals in the functioning of parliamentary democracy and said”The education can hardly be the sole qualification for membership of the parliament. If I may use the words of Buddha he said that man requires two things: one is Gyan and other is Sheel. Gyan without sheel is very dangerous. It must be accompanied by sheel by which we mean character, moral courage, ability to be independent of any kind of temptation, truthful to ones ideals. I am very keen to see that no member enters this august assembly who does not possess Sheel in adequate degree.” We need to think over and follow these great ideas of our leaders.

The recent stand-off in the parliament between the opposition led by the Congress Party and the NDA government led by the BJP is a case in point. The entire session was washed off because of unrelenting approaches both by the opposition and the government. The net result of this is legislative standstill and avoidable wastage of huge money. I am reminded of the phraseology of “Grammar of Anarchy” used in his closing speech in the Constituent Assembly on November 25, 1949. He said, “If we wish to maintain democracy not merely in form, but also in fact, what must we do? The first thing in my judgement we must do is to hold fast to constitutional methods of achieving our social and economic objectives. It means we must abandon the bloody methods of revolution. It means that we must abandon the method of civil-disobedience, non-co-operation and satyagraha. When there was no way left for constitutional methods for achieving economic and social objectives, there was a great deal of justification for unconstitutional methods. But where constitutional methods are open, there can be no justification for unconstitutional methods. These methods are nothing but the Grammar of Anarchy and the sooner they are abandoned, the better for us.”It was the warning given by the father of the Indian constitution. Now we shall assess and judge ourselves as to where do we stand. I think we failed ourselves.

On the political front, our political forces could not polarize themselves on the basis of ideology and programme. The society is still divided on the basis of caste and religion. The gains of development and progress could not trickle down to the poor and weaker sections of the society. The political democracy could not transform itself into economic and social democracy as envisaged by Babasaheb B.R. Ambedkar. These are some of the points which are a matter of concern and worry. But on the other side, it is gratifying to note that common man cherish and uphold the democratic values. The awareness is increasing. The governments are changed through the ballot and not by bullet. The social security net is getting root. The hope and scope of economic well-being is getting strong. I this way, India have come a long way in its 69th year of Independence but it has still to go a long way. It can happen with a strong political will and a strong moral sense with Gyan and Sheel as stipulated by Dr. B.R. Ambedkar

Let us rededicate ourselves today to redeem the pledge which PM Jawaharlal gave us at the dawn of Independence on the mid-night of August 14, 1947.