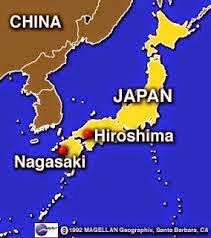 Yesterday, August 6, I remained at home and watched TV. It was the Hiroshima and Nagasaki Atomic Bomb Anniversary. On August 6, 1945 the US dropped atom bombs on Hiroshima and on August 9 on Nagasaki in Japan in the Second World War. It was one of the dreaded man made tragedy in which hundreds of thousands of innocent people died. I could feel the intensity of the feelings of Japanese people on this  catastrophe  during my stay in Tokyo from 2001-03 at the Indian Embassy.   It was a matter of pride for me personally that the voice of my son Rupesh, who was with us in Tokyo,  was recorded and put to use in the commentary in Hindi language at the Hiroshima and Nagasaki Peace Memorial  Museum in 2003 and remained for many years. Rupesh was picked to do the honours when he was working with the Japanese Radio (NHK Radio) in its Hindi service.

In the evening, Naresh´s friend Inderpal Singh with his homely wife Poonam dropped in at a short notice to play Sweep (Cards) and have a chat. It was a quick party. Naresh treated us nicely with a good starter of Lamb Masala to go with drinks and Chicken Masala Curry for the main course. The Sweep followed by Teenpati was relaxing and enjoyable. We would miss these pleasant activities back home in Jalandhar.

Posted by ramesh chander at 2:02 PM