GREETINGS ON THE INDEPENDENCE DAY

Today, August 15, is the Independence Day of India. It is a matter of co-incident that I am in Stockholm where I celebrated this solemn day many times from 1991-94 when I was working with the Indian Embassy. Once, It was in 1993, the honour of hoisting the flag in Stockholm fell on me as the Charge d´Affaires of the Embassy of India. I would tend to go to the India House at Villagatan for the flag hoisting ceremony being hosted by Ambassador Banashri Bose Harrison to exchange greetings with the Ambassador, Embassy staff and also with my fellow country men on the auspicious occasion of Independence Day of India.

India has come a long way in its journey to progress and development. But still we are to go a long way to fully redeem our pledge taken, in the words of Sarvepalli Radhakrishnan uttered on the night of August 14, 1947, and I quote “ So in a mood of humility, in a spirit of dedication let us take this pledge as soon as the clock strikes twelve.”  Jawaharlal Nehru´s famous speech ´Tryst with Destiny` followed. Nehru said “ The service of India means the service of millions who suffer. It means the ending of poverty and ignorance and disease and inequality of opportunity. The ambition of the greatest man of our generation has been to wipe every tear from every eye. That may be beyond us, but as long as there are tears and suffering, so long our work will not be over.”

Obviously, we are still to redeem our pledge taken at the dawn of independence. President Pranab Mukherjee rightly said in his address to the nation on the eve the Independence Day “ Poverty is not a mere statistic, it has a face. The poor cannot and will not wait for for another generation. The benefits of economic development  must percolate down to the poorest of the poor.” It is time to heed to the warning of Allama Iqbal: 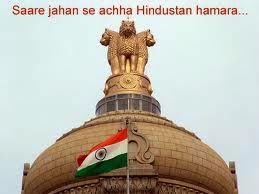 Think of the homeland, O ignorant one! Hard
times are coming
Conspiracies for your destruction are afoot in the heavens

You will be annihilated if you do not understand, O people of India!
Even your tales will disappear from the world’s chronicles

Posted by ramesh chander at 7:36 AM