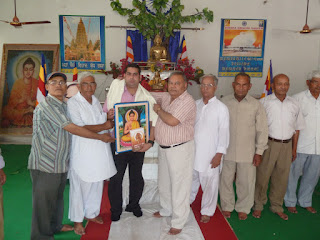 I wrote about my fellow BootanMandians some times before in this blog. I pick up the threads again today. Thanks to my friends Ram Lal Kainth and Darshan Bodhi who provided me some inspiration to do so. Ram Lal telephoned to say that they at the Buddha Vihar at Bootan Mandi were honouring one of the young lads of Bootan Mandi, Sunil. He had passed and qualified the PCS examination the results of which were declared a couple of days before. I was invited me to honour the youngman, Sunil is the son of my old friend and ‘Humumar’ Keshvanand, a fellow BootanMandian. I immediately accepted and felt honoured to do so. It was a brief and solemn function, a good gesture by the Buddha Vihar to recognise the talent in the community and more so from Bootan Mandi itself.

I had lost much contact because of diplomatic duties mostly abroad. I was really impressed by learning that apart from Sunil, Kesvanand’s other two sons were double MA plus and one of the Bahus ( wife of one of the sons) was also an MA & M.Phil. It was a matter of great satisfaction. In my brief remarks, I congratulated Sunil and Keshvanand on doing well bringing much needed honour to the community and the mohalla. Buddha Vihar and its dedicated team with Ram Lal, Darshan Lal, Chanan Ram was doing a good job in culcating the values of good conduct, as per the Buddhist philosophy, in the society and encouraging the young to excell in life. I wish them all the best.


Bootan Mandi had been the hub of business activities involving the community and did well. The focus of leather business has shifted. The traditional business has given way to the modren. Perhaps the community could prepare itself to adapt to the change and lost the emerging opportunities. In politics and public life, my fellow BootanMandians have not done bad. Seth Kishan Dass was an MLA even before independence. Seth Khushi Ram became the Vice President of the Municiple Committee, Kishan Dass’s grandson Avinash Chander is the Chief Parliamentary Secretary of the Punjab Government, Surinder Mahey occupied the coveted position of the Mayor of the city. Narinder Kaur remained a Councillor of the Corporation. Prem Shant is an imporant functionary of the BSP. In the past, BootanMandians did not do well in the services. But, oflate, the trend has changed for the better. The younger generation has come up to the expectations. Jagdish Mahey and Ashok Kler are the Senior Bank Managers. Sushil Sheemar is an ITS ( Director in the Department of Communications). His wife Jaswinder (Lovely) is an Additional Session Judge. Anupam Kler, the daughter of Seth Mool Raj and his daughter in law Babita are PCS officers and maning (womaning) senior positions in the Government. Mahesh Chander and his wife Anju, son and dauhter in law of my brother Kishan, two sons of Keshvanand are engaged in academics. Now Sunil has done wonderfully well in joining the PCS. Though I could manage to become an IFS, Bootan Mandi is yet to produce an IAS/IPS. I wish my fellow BootanMandians aall the very best in the years to come.