THE DALIT CHETNA - A Point of View

ThePrakash Utsab (Birth Anniversary) of Guru Ravidassji fell on February 7 which
was celebrated by the followers of the great Guru with gaiety and solemnity.
The celebrations continue depending on the time and schedule of the various organizations
to pay homage and tributes to Guru Ravidassji. In other words, the dalit chetna
is getting demonstrated. The dalit followers and rightly gladly so are
interested increasingly in associating themselves with the Guru who was the
fore-bearer of the flag of revolt and change against the uncivilized and
inhuman treatment of the poor masses of the lower strata of the society. I
would like to mention about the two such events and celebrations in which I
participated.

TheSocial Awareness Forum of Punjab held its Annual Family Day function atPhagwara on February 25. The Day was dedicated to the memory of Guru
Ravidassji. I was the Guest Speaker at the function on the theme ‘Relevance of
the Sant Andolan in the present scenario ‘. It was a well organized and well 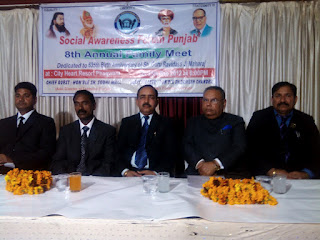 attended
function which was presided over by the President of the Social Awareness ForumJagdish Chander Virdi, Engineer at one of the Punjab Government Departments atLudhiana and the Chief Guest at the function was Sodhi Mall, Additional
Director of Factories in the Government of Punjab. I found both Jagdish Virdi
and Sodhi Mall gentlemen to the core and amicable personalities fully involved
in the community matters while delivering positively at their respective
important Government positions which they are holding. Being a faceless
diplomat throughout my career, I don’t know whether I could do justice to the
theme of the speech but I enjoyed my presence and inter action at the function.
It turned out to be some fresh air in the routine of such functions. The
present members of the Forum introduced themselves with their families. The
introduction set the mood and direction of the function. The audience comprised
of ‘ who is who “ of the dalit community in and
around Phagwara which included doctors, engineers, bankers, teachers,
retired senior officers, businessmen, recognized state and nation level players
and young and upcoming students. Both President of the Forum Virdi and Chief
Guest Mall spoke informally and briefly unlike the general trend of sticking to
the mike. The young students were honored with souvenirs by the Forum like in
the previous years. I was informed that the Social Awareness Forum apart from providing
the glue and platform to the educated sections of the community to get-together
is also providing medical and financial help to the needy. The second session
of the event was informal and enjoyable from the cultural point of view. The
young lady artist besides singing the spiritual and devotional numbers also did
well in providing a good cultural interlude. Col. Shankar Singh and Dr. Balkar
Chand recited poetry and entertained the audience. It was a good change from
the routine format of the function. The flow of snacks throughout the function
was unhindered and the dinner was good with warm hospitality by the organizers.
I must say that the function was a success and helped in generating much needed
awareness and fresh air - a healthy trend. My congratulations to the Social
Awareness Forum. We need more such organizations.

Thesecond function I attended was the one organized by the Guru Ravidass Sabha of
Deol Nagar in Jalandhar on February 26 to celebrate the Gurupurab of the great
Guru. It was a good and clean function with the kirtan darbar of high rendition
and a well prepared langar. I could see and feel the air of harmony and
brotherhood flowing freely among the residents of Doel Nagar without any
superfluous feeling of caste and creed. The jaikaras of JO BOLE SO NIHAL and JO
BOLE SO NIRBHAY succeeded in clearing the air. It was the real tribute to the
memory of Guru Ravidassji. My congratulations and thanks to President of the
Sabha Malkiat Singh and other organizers who very kindly provided me an opportunity
to speak and pay my humble tribute to the great Guru Ravidassji.

The dalit Chetna is emerging and shall find a due space and place in the society at
large.
Posted by ramesh chander at 9:17 AM