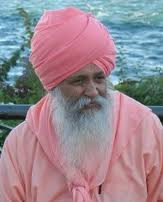 
Today, May 25, is the 2nd death anniversary of Sant Ramanand of Dera Sachkhandballan of Jalandhar (Punjab). I had written about Sant Ramanand in this Blog before and also about his tragic death in Vienna (Austria) in the aftermath of a gruesome shoot out in Guru Ravidass Gurudwara on May 24, 2009 by some fanatics and fundamentalists. It was a heinous crime not only against the communal peace and tranquility of the State of Punjab and the Indian society at large but also against humanity and also against the very tenants and lofty ideals of the great Gurus. Sant Ramanad, to my mind, was himself a virtual Sikh who believed not only in the mission and philosophy of the great Sikh Gurus including Guru Granth Saheb but also preached and imparted the knowledge of the Guruwani to the masses through Satsang for the spiritual well-being of the followers. Sant Ramanand was a spiritual Guru, keeping with the great Saints of the Dera Schkhandballan. The Dera has, and rightly so, become the nerve centre of the social and spiritual upliftment of the masses of the region and more so of the dalits and followers of the great Guru Ravidass. Sant Ramanand’s contribution in the process was great. His whole hearted involvement in the social, educational and spiritual emancipation of the poor masses belonging to the weaker sections of the society will be remembered in the years to come. Sant Ramanand was a harbinger of awakening and awareness among the dalits in the true spirit of Guru Gobind Singh’s philosophy “Soora so pehchaniye jo lade deen ke hait “He taught to the dalits and under privileged the Mantra of assertion for their rights. Perhaps these very things which were good for the establishment of an egalitarian society as the Sikh Gurus desired did not go well with the “Thekedars” of the society. Santa Ramanand paid the price by giving his life as he knew that the Azadi and Righteousness would be safe guarded only through fearless conduct and sacrifice. He was acting in accordance with the teachings of Guru Nanak, Guru Gobind, Guru Granth and also Guru Ravidass, the flag bearer of equality, fraternity and justice.

Sant Ramanand’s conduct in his life time and his contribution and sacrifice for the overall well being and welfare of the community and the society at large will be remembered and appreciated forever. But there are a few lessons which are to be learnt and a few questions which would require to be answered, if we are really want that the sacrifice of Sant Ramanand is not lost and is wasted. The lessons to be learnt are, to my mind – i) greater vigilance and sense of security is needed as the mission and programme of the community gains strength ii) the agenda of the community and that of the leaders may not be high-jacked by the self cantered and self appointed leaders who are hanging in and around the ‘ canters of awakening and action ‘ like the the spiritual deras iii) the inherent and resultant energy of the community which got amply demonstrated in the aftermath of the Vienna incident and the martyrdom of Sant Ramanand needs to be directed and channelized before it goes berserk and sense of fatigue sets in. iv) there is an urgent need to create and establish ‘think tanks’ which may provide much needed policy inputs and options before the community to avoid vacuum of direction and leadership which was visible in the wake of crisis after the tragic happenings of Vienna in May, 2009. Similarly, some questions which need to address urgently and immediately – i) what should be done to save and safe guard the much needed unity, particularly to defeat the dirty designs of the opponents who are much stronger and organized? ii) the questions related to cooperation or confrontation, which is likely, about the new sect/religion and of the vani/granth need to addressed keeping in view the overall harmony and peace in the society iii) the questions of spiritual, ethnic, social, legal, constitutional force and sanctions for the creation and propagation of the new sect/religion in the background of the struggle of Dr. B.R. Ambedkar and Babu Mangu Ram in the contemporary times. I am a humble and ordinary member of the community and a follower of Guru Ravidass and Dr. B.R. Ambedkar. The views expressed in this write up are personal and are free-wheeling which may serve as ‘food for thought ‘.

If we are able to consider and think 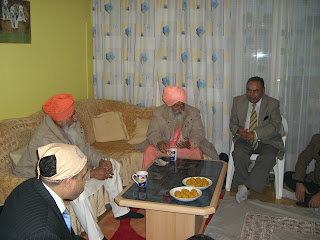 on some of the issues raised in the preceding line, I would think that it is my sincere tribute to the memory of Sant Ramanad with whom I had the opportunity to interact and discuss some of these concerns in one of my meetings with him in Vienna itself in February 2008.
Posted by ramesh chander at 3:16 PM