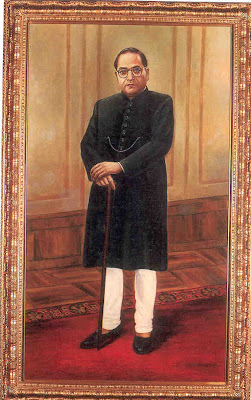 Today, December 6, is the death anniversary (Parinirvan) of Dr. B. R. Ambedkar, father of the constitution of India, saviour of the down trodden, an intellectual of standing, a great social reformer and a fore bearer of revival of Buddhism in India. The whole country and the society at large is paying tributes to the memory of the great leader and worthy son of India, Dr. Ambedkar. I wish to join them with in doing so and pay homage to him.

My family beginning my grand-parents has been Ambedkarites, and rightly so, but with liberal views particularly with regard to political and spiritual philosophy of Dr. Ambedkar. I am no exception. I like and respect Ambedkar's mission and thought specially with regard to his great contribution to India's constitution on the bases of which India is the largest democracy in the world, his crusade for the upliftment of the dalits in India, his struggle for establishing a caste less society and above all for giving a sense of dignity to the poor and under-privileged segments of the society. I write this with a sense of gratitude.

I remember and recall that I used to participate with my father in various functions related to Ambedkar in my childhood in Jalandhar. It continued during my young and formative years as a student. I alongwith my fellow Bootanmandian Ram Lal Kainth participated in a paper reading declamation at the DAV College on the topic " The future of parliamentary democracy in India " sometime in 1967-68 and quoted extensively from Dr. Ambedkar's speech at the DAV College delivered in 1951-52 on the subject. My paper got due attention not only from the students in the audience but the members of the teaching faculty. I was happy and declared myself winner. We observed December 6 and organised a public meeting at Bootan Mandi in 1968-69. Prof. Krishan Lal Sachdev of the History faculty of the DAV College, who had shown keen interest in Dr. Ambedkar at the above mentioned paper reading contest was invited along with Sadhu Singh Hamdard the Chief Editor of the Punjabi daily Ajit as the lead speakers at the function. Prof Sachdev spoke, as usual at a high pitch, very highly of Ambedkar and narrated a few personal anecdotes too. Editor Hamdard, who was little reluctant to come initially, got spirited and spoke at length about the magnetic personality of Dr. Ambedkar and how he was personally impressed when he met Dr. Ambedkar in a sikh delegation to solicit him to become a Sikh. The Editorial write up in the Ajit on that day was revealing. Editor Hamdard in a signed editorial termed Ambedkar as " MUFKRE AJAM and handed over 200 copies of the paper for distribution at the function. I would like to make yet another mention which may be of interest. Keeping with the dictum of Dr. Ambedkar " Educate, Organise and Agitate ". We the dalit students of all the colleges of Jalandhar floated an association/federation of scheduled caste students some time in 1969. The newly created federation of students in co-operation with other organisations arranged a protest march and burnt the effigy of the Jagat Guru who had said something against the interest of dalits.. The march, before its termination at the district headquarter, was turned into public meeting. Though I always preferred to work as a back room boy in all these activities yet I was also invited to speak from the make shift podium and address the meeting which was also addressed by Master Gurbanta Singh and other politicians. The point I would like to make is that it instantly came to my mind and I suggested that the new university which was about to be set up either in Jalandhar or Amritsar shall be named after Dr. Ambedkar. It was a fresh and new idea from a novice like me but it electrified the audience. The demand got registered and later, I am happy to note that an important professional institute has been named after Dr. Ambedkar. It is a tribute to the memory of Dr. ambedkar from my unwritten diary. The great poet Gurdass Ram Alam wrote about Dr. Ambedkar's work and impact: