The Countdown - the End of a Facinating Journey - 2 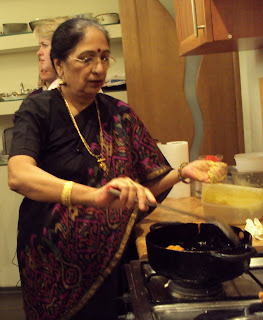 te on November 18 on the process of binding up in Minsk before we move to India on retirement by the end of the year. The schedule is getting tight everyday with farewell calls, preparing for the Good-Bye Receptions we would host on December 8 and December 16. Some of these events turn out to be emotional and rightly so.

During our stay in Minsk and the course of our duty in the realm of public diplomacy, we gave demonstrations to the local media on Indian cooking at the India House which were well received. Vidya my wife is by now well recognised in the diplomatic and social circles in Minsk and also in the media that she is a good cook with simple recipes of north Indian food of Punjabi variety. The iTV, a leading online TV Channel contacted us for an informal cooking session which they would host. Keeping with the demands of our over crowed schedule in the processing of our final departure from Minsk, my wife was not too keen to undertake this long session of about 5 hours. But the iTV insisted and pleaded. We could not say no and the cooking demonstration for the TV was arranged on November 29.

The kitchen of the India House, our residence, was turned into a make shift studio by the technical staff. Later a good looking and well groomed middle aged beautiful lady came and we were told that she was Evlina Sakuro, a well known and famous Belarusian actress. She was specially engaged by the iTV to anchor the programme. I acted as the helper of Vidya in the cooking session and Olga, my Social Secretary, helped in interpretation into Russian. One by one, Vidya made chilli chicken, chanamasala, vegetable biryani and assorted vegetable pakoras. It was almost done with a professional touch. After the cooking, the table was 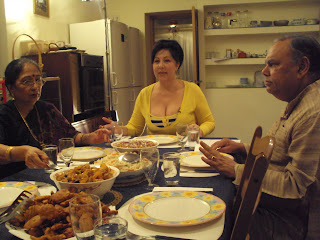 laid with the cooked food and it was relished by the whole TV crew. The Producer Director and the Anchor were fully satisfied that the shooting was done without resorting to cuts and retakes. For us, it was a fulfilling experience to promote Indian food as part of diplomacy. The Anchor of the Programme Evlina, towards the end asked whether I knew the name of the programme. I said no. She said that they were considering to title programme as ' The Spicy Ambassador '. I said it sounded sexy. Let us see how would it turn out. We will not be in Minsk to see as the programme would be hosted in the iTV by the middle January 2011.
Posted by ramesh chander at 4:33 PM