The Countdown - the End of a Facinating Journey - 4 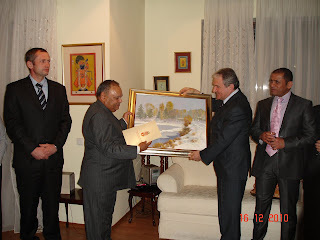 I continued towards the final stages of the journey. My diplomatic colleagues social friends are keeping us busy with their gracious hospitality in saying farewell to us. These lunches and dinners, on the one hand, is a routine affair in diplomatic functioning but it also tends to touch the emotional cords beyond the diplomatic protocol. I may write separately on these individual functions later.

We hosted my official 'Good-Bye' reception on December 9 at the India House in Minsk. It was attended by the cross sections of the society from the diplomatic, official, business circles in Minsk. The food, as usual, was totally Indian done at home by my wife Vidya and Chef Purushottam. The Indian diplo 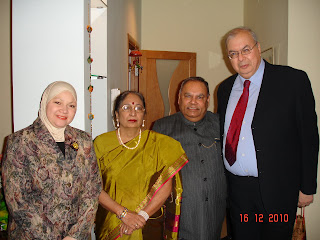 mats generally tend to entertain guests at home with a view to provide Indian touch to our functioning and rightly so. It not only becomes cost effective but also homely and informal. I personally think that protocol rigidity brings in avoidable drabness in such functions.
It was an evening of excitement for us. A few minutes before the function, Deputy Foreign Minister Sergie Alinek, who was to represent the Belarusian Foreign Office at the function, spoke to me on phone and expressed regret that he would not be able to do so personally because of some other pressing work. I said that I would understand these diplomatic pitfalls and there was nothing to worry. His message was delivered by Director of Asia and Africa Division in the Foreign Office which inter alia said "I would like to express, Ambassadoe Chander, my sincere gratitude for your cordial attitude to Belarus and for the efforts to strengthen fri 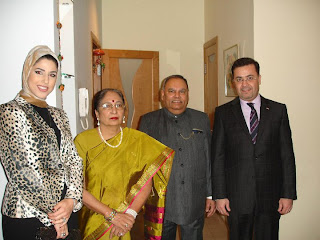 endship, cooperation and mutual understandings between Belarusian and Indian people. I am confident that for many Belarusian, incliding those present in the Hall, you have become a real friend and an honourable representative of your great country." Ambassador of Serbia who is the Dean of the Diplomatic Corps in Minsk spoke spiritedly which humbled me a great deal. He presented a beautiful painting as a farewell gift to me from the Diplomatic Corps with a Citation which, inter alia read ".It is a great pleasure for me to express the words of gratitude for the cooperation and understanding that contributed much to the strengthening of friendly relations among the Ambassadors and the Diplomatic Missions in the Republic if Belarus and the countries they represent." Many of my diplomatic colleagues made touching references to our interaction and working with each other. American Charge d' Affaires wrote in his message " It has been a pleasure-to know you as true professional and a warm human being." We would cherish the memories of Minsk.

The wines flowed. The Indian informal hospitality did the trick. I felt that everybody was at ease and enjoyed. That was the purpose.
Posted by ramesh chander at 9:09 AM