India observes the September 5 ( President Dr. Sarvapalli Radhakrishnan's birthday) as the Teacher's Day. It is a befitting tribute to the memory of President Radhakrishnan, who was a philosopher, thinker and a great teacher, and also an honour for the teachers of the country, who play an important role in the progress and development of the country and the society at large. The Indian thought provides a great importance to the role of a teacher (guru) as the great saint Kabir said- गुरु गोविन्द दोनों खड़े, किस के लगूँ पांव; बलिहारे गुरु आपनो, जिस दर्शन दिओ दिखाए !

Today, I will like to join the nation in paying my gratitude to some of my teachers for their immense impact on my life during my student years at various levels of my education in Jalandhar and also later in life. Though I could not attain much in terms of lofty degrees yet in my life and career my teachers certainly contributed a great deal.

One great teacher, who is still alive in my cherished memories, was Shiela Behanji, at the Bootan Mandi Guru Ravidass Primary School. A dusky but charming and benevolent face of Shiela Behanji will ever remain with me. She was totally involved and dedicated not only in our schooling but also almost as a family member joined our good and bad. I remember, she was liked by all the students also our parents. I distinctly remember that we used go to her home at a nearby locality Abadpura for extra and additional classes particularly in the long summer vacations, without any fee. She treated us like her children. I do not know for sure if Sheila Behanji is still around. If she is, I am happy and wish her all the best.

After the 4th Class in 1961, I moved to the Sain Dass Anglo Vedic High School at Basti Nau, one of the leading schools in the area, some 5 kms. from Bootan Mandi. I used to walk to the school (later from the 8th class onwards I was given a cycle) with others from our Mohalla. I remember Headmaster Baldev Raj, whom we all ebbed but respected, with good memories. He was a good Administrator and ran the school with total command. He was a great teacher of Mathematics ( I was never at ease with that difficult subject) with an additional flare to solve the difficult sums with quite an ease. Pandit Dev Dutt, a simple man, also taught us Math with his own home-made style and solutions. Lala Dwarka Dass was the Vice Headmaster, a saintly personality, taught us English. We all in the class found his style of teaching generally boring. He always insisted to make notes of all what he lectured in the class. Being a mediocre and timid boy, i did it rather religiously. Later in the College, I found that Lalaji was a good teacher and the notes of his lectures came handy and helped a lot.. Lala Dwarka Dass was, i shall admit as a matter of compliment, instrumental in teaching, whatever little English I know. Lalaji's weekly spiritual and cultural lectures on the Saturdays were of great value for the day to day life.I also remember with fond memories Giani Malluk Singh who was the Punjabi teacher. He was a poet of a sort. I still recall a small booklet of his poetry which i used to read. He will generally enter the class reciting his poetry which went like -ਸਚੋ ਸਚ ਬਤਾਨਾ ਚੰਗਾ; ਇਸ਼ ਦੀ ਸਬ ਸਰਦਾਰੀ, ਇਕ ਦੋ ਬਾਰ ਝੂਡ ਜੋ ਬੋਲੇ; ਹੁੰਦੀ ਬੇਇਤਬਾਰੀ ! It is just a co-incident that I still have a close linkages in the nearby localities of my Alma mater in Basti Nau. My two sons are married in the families having small businesses in sports goods and my sister married and living in Nizatam Nagar. Her husband Prof. Balbir Chander is also, incidentally, a senior lecturer at the faculty of Political Science at Doaba College and belongs to the teacher fraternity. My brother Kishan is working with the Soccer International as a Senior Executive. I feel good to revive memories of my school days when I happen to pass by to visit my relations around the Sain Dass School.

I graduated from the school in 1966 and joined the DAV College Jalandhar, one of the finest and leading institution, at that time, not only in Punjab but, I think, the entire region. 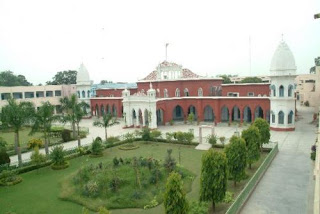 Principal B.S. Bahl was a great Administrator with a clear vision and mission. He was much revered and respected educationist not only with the students but also with the faculty of the great college.. I liked him for his special imputes to the extra-curricular activities like debates, contests, talks, sports etc. The library of the college was not only well stocked but well managed also. I was much interested in General Knowledge and as such my added interest in Political Science was natural. Prof. K.C. Mahindru and Prof. K.K. Ghai were my favourites among the teachers. Prof. Krishan Lal Sachdeva was yet another whom I liked because of his professional command on the subject of History ( He was regular in the debates and talks of interest) and also his utter simplicity though I was not a student of History. I recall that we invited him to Bootan Mandi for a function to pay tributes to Dr. B.R. Ambedkar on his death anniversary in 1969. He came and made a thought provoking speech. It was a rare occasion to have this kind of involvement.

All said and done, the schools and colleges in which one gets educated in the formal sense and also the role and contribution of the teachers goes a long way in moulding our personalities by imparting informal education also. These connections and affinities become an integral part of our lives which we cherish through out. I salute my Alma mater on the Teacher's Day.
Posted by ramesh chander at 1:11 PM