My Short Trip to Delhi

My Short Trip to Delhi

My friends and colleagues invited me to Delhi for a pre-launch meeting of a new business outfit, Atmanirbhar Global Chamber of Commerce and Industry (AGCCI) which will be formally launched soon under the patronage and guidance of my retired diplomatic colleague Ambassador Anil Trigunayat and my friend Anil Mehta, a businessman of his own standing. They proposed my name as an Advisor to AGCCI which I accepted with all humility. AGCCI, as I visualize, would serve the small and medium companies – 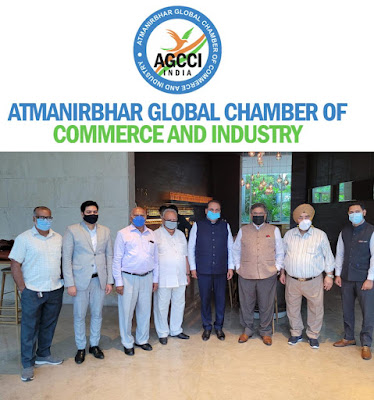 manufacturers, traders, importers and exporters, distributors, service providers etc. in ‘doing business with ease’ both in India and abroad in cooperation with important apex business facilitators like FICCI, FIEO and various export promotion Councils as partners in development. My colleague and friend from the IFS fraternity, Dilbag Singh will hold the fort for day to day administration of AGCCI. I am confident that AGCCI would deliver to the benefit and advantage of business communities to enable them to come out of the Covid pandemic difficulties which have retarded their operations. I wish AGCCI all success in its endeavors.

It was a trip undertaken after one and a half years primarily owing to the deadly pandemic and the ongoing Kisan Andolan which has resulted in uncalled for difficulties to the common traveler to and from Delhi. On being invited to Delhi by my friend Anil Mehta for a meeting on July 14, I was reluctant to accept the invitation on account of my apprehensions about difficulties on the way because of the Kisan Andolan but he assured me that slowly things were becoming normal and drivers knew how to enter Delhi through alternative routes. I agreed to join them. Accordingly, I started at 12 noon on July 13 to reach Delhi comfortably by 7 in the evening. But that was not to be. We got stuck at Rajpura in Punjab. Kisans had blocked the traffic from both sides and sat on Dharna in protest against some skirmishes between Kisans and the Police the day before. It was total chaos with a jam of about two kilometers on both sides of the road. It is good or bad, I don’t know, I have observed that the common Indian has a lot of patience and no sense of time. It is totally unwarranted, unethical, uncivilized and avoidable to block the highways at will by the rowdy crowds and harassing the common man on the road. But what to do in spite of the fact, the Chief Architect of the Constitution, Babasaheb Ambedkar warned in his last speech and said, “If we wish to maintain democracy not merely in form, but also in fact, what must we do? The first thing in my judgment we must do is to hold fast to constitutional methods of achieving our social and economic objectives. It means we must abandon the bloody methods of revolution. It means that we must abandon the method of civil disobedience, non-cooperation and satyagraha. When there was no way left for constitutional methods for achieving economic and social objectives, there was a great deal of justification for unconstitutional methods. But where constitutional methods are open, there can be no justification for these unconstitutional methods. These methods are nothing but the Grammar of Anarchy and the sooner they are abandoned, the better for us.” The greedy and unethical Dhabas around, though we claim to be religious and open our shops etc. with Dhoop-batti, fleeced people by charging as they wished without any scruples. After a wait of about two hours, my driver took the initiative and decided to go back and take an alternative route through the villages. Finally we hit the highway at Shambhu – Punjab-Haryana border almost 4 hours behind schedule. Is it not ‘Grammar of Anarchy”? Yes, it is. We were to take a detour to reach Delhi from Singhu border, site of Kisan Dharna, for the last 7-8 months the standoff between the farmers and the Government on the laws on agricultural matters. It is a widely 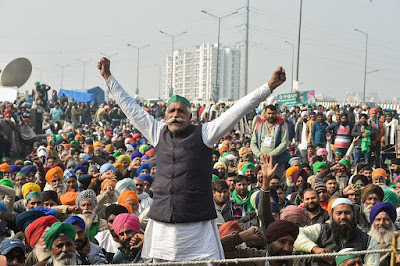 discussed and written about subject and I would not like to write much. But let me register my first hand impression about the scale and conduct of the Dharna – it is spread in the middle of the road in about a 10 kms. stretch before the Singhu border. Makeshift houses in trolleys, trucks and tents and even steel, wooden structures having generators, air-conditioners have come up. The food requirements are met under the lofty concept of Langar. My immediate reaction, after seeing this, was that Government should not allow this conflicting situation to prolong and decide the issues at stake with the farmers in all seriousness before it gets further complicated. We are a democratic country. There is no place for undue egos on both the sides. This standoff should end as soon as possible. Otherwise, it is bound to harm our polity, society and our international image which in any way is not in the national interest.

I reached my place of stay, Hotel Andaz at Aerocity, around 11 in the night. The hosts and the Hotel staff were good enough to serve the ordered dinner of soup and vegetables in the room itself before I hit the bed. Later in an informal chat, Event Sales Manager, Devender Kumar of Andaz told me that Andaz – a concept by Hyatt was one of the most modern dens of good living out of the 10 hotels in the Aerocity. It has 401 rooms. Interestingly in my room, there was a Coffee Table Book which enumerated 401 reasons why one should be in Delhi and be at Andaz.  Andaz, I found, a nice place to stay.

After AGCCI meetings and working lunch at Andaz, I was to catch up with my friend and relation, Dev Raj, a retired senior Delhi Police officer who lived in a nearby posh area of Palam Vihar in Gurgaon. Sardar D.S. Chadha, a well established businessman who was also with us at the AGCCI meeting kindly offered to drop me at Dev Raj’s abode. I gladly accepted the kind gesture. The ride, though short, was rewarding as we could exchange our respective life experiences and became good friends instantly. Thanks Chadha Sahib.

Dev Raj and his gracious wife Sheila, a harmonious couple, belong to my native place Jalandhar. We enjoy many common connections of friends and relations. There was much to talk and revive our old

memories and ponder upon the on goings. The green and well manicured lawn and matching flora around was a good place to sit and talk over rounds of masala tea. Dev Raj is a good raconteur and jovial while Sheila a reticent and quite lady. The evening was
totally relaxed. The well stocked house-bar enticed me and I sipped a couple of Chotta pegs of smooth Chivas Regal before a good dinner. Visit to Dev Raj and their overflowing hospitality charged my batteries. I returned to Jalandhar on July 15 after a short trip to Delhi, a good change to break the monotony of confinement in the wake of Covid mess.

Posted by ramesh chander at 5:38 AM