I say with a heavy heart that this is the third obituary I am writing in a month’s time in succession after the demise of a Community Activist Jiwan Singh and my friend and colleague Ambassador Ashok Amrohi and now that of my fellow-Bootan Mandian and one of the elders of our Mahey clan, Seth Ram Lal. It is not a pleasant experience; nevertheless, one has to live with the realities of life. Seth Ram Lal, 89, passed away on May 15 on account of some age related maladies he was suffering from, of late. Ram Lal was holding the flag of the family with élan. Ram Lal’s father Seth Munshi Ram was the cousin of Seth Sunder Dass, a known community leader of Bootan Mandi, a hub of dalit consciousness and awakening in and around Jalandhar.

I did not know Ram Lal as late as mid 1970s. Ram Lal chose to migrate to the UK in mid 1950s in the first wave of migrant labour from Doaba region for greener pastures. I left Jalandhar for Delhi for my career in the IFS in early 1970s. Ram Lal, as I know, did not come back to India for almost 20 years. The family, including his 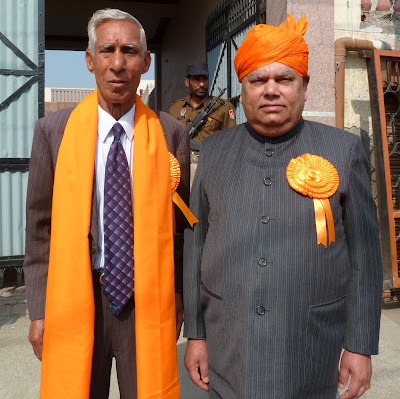 wife, suffered the pangs of separation and Ram Lal voluntarily or otherwise spent his formative and prime years of youth in the UK earning his bread and butter with dignity. On his return from the UK in mid 1970s, he fully engaged himself in the betterment of the families of his brothers and stood by them through thick and thin, besides soothing the hurt and ruffled sensitivities of his diligent and gracious wife, as Ram Lal and his wife did not have any issue on their own. Ram Lal was a good and courteous man. On meeting Ram Lal during one of my home-leaves in mid 1970s, we got good and friendly vibes and started liking each other. I found Ram Lal always dressed fairly well with jacket and tie in winters and pleasant and dignified summer outfits. My brothers, Kishan and Paramjit and even my father, Papa Sodhi Ram told me that Ram Lal was instrumental in making the family - Hussan, Surinder and Paramjit sons of his brother Rup Lal and even sons of his yet another brother Karam Chand, stand up and establish themselves as successful business entities by their own right. Surinder Mahey even made to the esteemed position of the Mayor of Jalandhar in early 2010. It is said that Ram Lal helped and stood by him financially and otherwise as a responsible head of the family.

Ram Lal was a committed and dedicated community activist pertaining to Guru Ravidass and his mission. After his return from the UK, he involved himself in community matters and did a lot for the community. In Bootan Mandi itself, he was instrumental in renovating and rebuilding schools, both high and primary which were handed over to the government to run them. Though I would not appreciate and endorse this action of handing over these assets to the government and not handling them on our own for the advantage and benefit of the community yet I have not an iota of doubt about the sincerity and integrity of Ram Lal ji. I think his younger and educated associates should have taken the correct decision in this regard. Seth Ram Lal played an important role in the construction and development of Guru Ravidass Dham, a nerve centre of community activities in the region. I was told that he took special interest in the renovation and upkeep of the cremation grounds of the

area at Jalowal Abadi which was much appreciated by the people. Today, May 16, when I visited the bereaved family to pay my condolences, his nephews Hussan Lal and Paramjit told me that not only in and Bootan Mandi, Ram Lal contributed and donated handsome amounts in lakhs of rupees from his personal funds to hospitals and schools run by Dera Sachkhand Balan, Dera Swami Gurdip Giri of Pathankot and also development of facilities at Seer Govardhanpur at Varanasi (Banaras). Ram Lal led the caravan from the front as President of Guru Ravidass Educational and Charitable Trust for several years and did many appreciable deeds without much fanfare and credit. He was a considerate and humble man.

I am sorry to add that later when I returned to my roots after retirement in 2011, I found Ram Lal a bit bitter and dejected on account of activities by some of his associates and co-functionaries. The project of development of Guru Ravidass Dham  at Bootan Mandi was close to his heart but some vested interests were having their own agenda with regard to properties and assets (land etc.). Ram Lal, true to his salt, did not like it and even stood his ground in the court of law and won the court case which he fought single handedly on his own. Unfortunately, the matter is still not solved and the vested interests are trying to hoodwink and by-pass the system by hook or crook. It must be resisted and a fair position restored at the earliest in the interest of the Dham and the community at large. It will be a big and betting tribute to Seth Ram Lal ji whom we would miss greatly.

I close this with Naman to the departed soul of my fellow BootanMandian, Seth Ram Lal.

Posted by ramesh chander at 5:22 AM