Jai Singh Phillaur (1954-2021), a social and community activist of his own standing passed away on May 22 due to the deadly virus of Corona. I did not know Jai Singh Sahib very intimately and met him only a couple months ago at a meeting of Scheduled Caste Ekta (Entrepreneur) and Empowerment Forum (SCEEF) at Chandigarh and more recently at a Webinar of SCEEF some two weeks ago. Jai Singh himself informed that he was not well and was running a high fever and was found Corona positive. I was impressed by his commitment to and engagement with matters of community 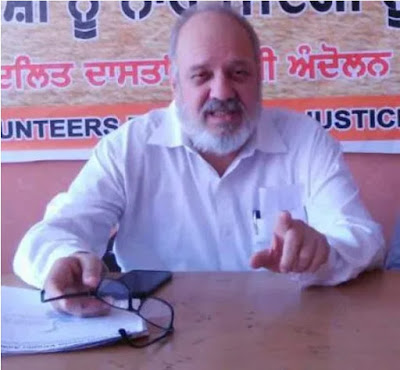 interests. Jai Singh was suffering from some sort of infirmity in legs as even in Chandigarh he was using a walker to help himself. I found Jai Singh was a man of brevity and would tend to say his mind and view point candidly but briefly. Though I was impressed by his presentations and dignified demeanor yet I was yet to fathom his depth. He himself informed that he was engaged in the issue of bonded labour and other matters pertaining to the weaker sections of society particularly dalits and felt that Jai Singh was an activist belonging to the left orientation. But his presence at the meetings of SCEEF which is an outfit affiliated to the right-wingers like the BJP and RSS waffled me. Later I came to know that Jai Singh and his family have had RSS connection from the days of his grandfather, who was an employee with the Railways, was an active RSS Swayamsevak. Notwithstanding all this, it was certain that Jai Singh was a much respected and sought after personality as mentioned and referred to by many like Dr. Varinder Garg an RSS Swayamsevak, BJP leader Rajesh Bagha and Former Chief Parliamentary Secretary Avinash Chander, Social and Political activist Paramjit Singh Kainth among others.

After getting the sad news of the demise of Jai Singh and obtaining the telephone number from Rajesh Bagha, I spoke to one of the Aides of Jai Singh, Jasbir Singh to register my heartfelt condolences to the bereaved family. Jasbir Singh, giving the background of the departed soul, informed that  Jai Singh was fully engaged in the welfare and wellbeing of the weaker sections of the society through

his various outfits like - i) Volunteers for Social Justice ii) Dalit Dasta Virodhi Andolan iii) NAREGA workers Union etc. Though Jai Singh belonged to Phillaur in the Doaba region but his ‘Karambhoomi’ remained Moga and many places in the Malwa region of Punjab.  On the two occasions when I have had the chance to interact with Jai Singh ji, he spoke about issues pertaining to labour and land issues of the landless and also his untiring efforts for the emancipation and empowerment of the under-privileged particularly dalits both in India and international and multi-lateral fora. Jasbir Singh connected me to one of the two sons of Jai Singh, Jaskaran Singh and I spoke to him. I felt that Jaskaran, an advocate like his father, must be a good and humble personality. Giving the family details, Jaskaran informed that they were two brothers and one sister. The brother and the sister were also advocates. Jai Singh’s father was a teacher by profession. One may observe that the whole family, from the grandfather onwards, was a well placed and educated lot and was engaged in social and community matters. I was fully impressed by the persona and credentials of Jai Singh in a short span of our association. The deadly virus did not allow us to carry on and learn from each other and work together for the wellbeing of our fellow brethren in the weaker sections of the society. I feel cheated and robbed and conclude it with a heavy heart and prayers for the nirvana of Jai Singh ji.

Posted by ramesh chander at 8:48 AM