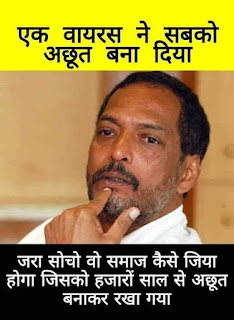 I have been writing on the lighter side of the corona virus coupled with some serious inputs on the subject just to do something positive in the confinement at home in the general lockdown. With this, 35 blogs, I will close this chapter as we reach a stage where we are compelled to live with the situation. There is no other way. I take this opportunity to wish all the best to all my friends and the society at large. We will succeed in the fight against the deadly Wuhan virus, it is my solemn belief.

It seems that virus situation in India is under control in spite of the fact that number of positive cases are increasing every day. In the last 24 hours about 25 thousand cases has further swelled the figure which stood at 6 lakh seventy five thousand with 20 thousand fatalities as of July 5. The redeeming feature is that more than 4 lakh infected cases have been cured with recovery rate of more than 60%. Yet another matter of relief is that it has been reported that the Indian companies have developed the requisite vaccine to counter the virus, of course a big feat, and the vaccine, as announced by the ICMR and Bharat Bio-Tech, might be formally launch on August 15. It will be a good gift to the nation and the humanity on our national day, Independence Day of India. Let us hope for the best. 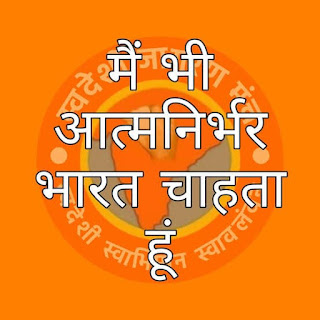 Government is determined and fully geared up to meet the challenge. PM Narendra Modi spoke to the nation for the 6th time since the lockdown and gradual opening up and addressed the concerns of the marginalized sections and unemployed with regard to ward of hunger and resultant pangs at the grassroots. More needs to be done and, it seems, the government is not oblivious of these ground realities.

Apart from fighting the virus and controlling the damage done by it to the economy and social fabric of the country, there are other problems which need attention and action immediately. The biggest threat in this regard is the developing situation and standoff at the LAC with our hostile neighbour, China. Other two players Pakistan and Nepal, in nexus with China, are trying to fish in the troubled waters. PM Narendra Modi by visiting the forward posts in Ladakh on July 3 has given a much needed stern message to China that India means business and will not be found wanting in defending our territorial integrity and sovereignty, in case of any mis-adventure by anyone. The entire country of 130 crore people are standing behind the government and our valiant armed forces. We are to, let me add, fight on our own to defend ourselves, of course with the understanding of friends in the international community. Any uncalled for and misplaced bravado should be avoided as a peace loving country – the land of the Buddha.  I think the opposition led by Congers Party, particularly Rahul Gandhi and his associates, must be mindful of the sensitivities of the situation. They have made their point with regard to their varying perceptions of the 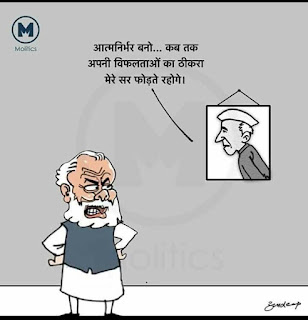 situation as a functional and effective opposition. They should leave it that and stand with the government to face the external challenges to the country. The ruling outfits and the media should immediately stop trolling the Congress and the Nehru-Gandhi family in the larger interests of the country. But unfortunately, sane voices are getting muted in this regard. If we continue this internal bickering for short term political gains, we will do so at our own peril.

This, the last blog on the subject, will not be complete if I don’t touch the lighter side of the situation to lessen the grimness around.

The opposition and the government are busy in finding faults with each other. Somebody has tried to register his or her point in a lighter vein

For the benefit of the opposition -

Without freedom of speech, we would never know who the idiots are!

This government is amazing. It talks about the future, and when asked about the present, it goes into the past!

Some sarcasm on the increasing prices of petrol –

Posted by ramesh chander at 6:13 PM