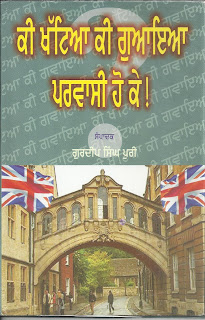 Ki khateya Ki Gavaya Parvasi Hoke , as the author Gurdeep Singh Puri of Glasgow in Scotland (UK) himself said that it was a “Self Analysis” of ‘What we gained and lost as being immigrants. The book is a collection and compilation of essays (from page 9 to 120) and poems (from page 121 to 148) of some of our writers and poets who went to greener pastures in Europe and other developed countries. The book was presented to me in November, 2008 when I was the Consul General of India in Edinburgh (Scotland) by Gurdeep Singh Puri, a prominent and vocal member of the prosperous Indian community living in Glasgow. Gurdeep was a writer and a poet of sorts who also dabbled in journalism occasionally. I have said more about him in my letter which is available at the back cover of the book under review. 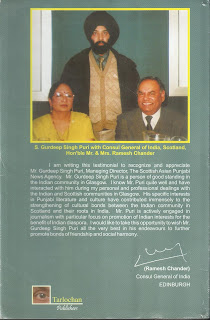 I could not read the book earlier partially by oversight and partially due to other preoccupations. Apart from Gurdeep himself, many from other places have contributed to the book from their respective perspectives of their coming to foreign lands to earn their bread and butter. It is a matter of gratification for me to observe that some of the contributors like Balwant Singh Sagoo who has written a piece to introduce Gurdeep Puri – ‘Anokhi, Sunakhi e Bahu-mukhi Sakhshiat – Gurdeep Singh Puri’ – in his typical literary style, Noor Bharti, Gurdev Singh Virha, Swaranjit Kaur, Bebe Nand Kaur among others were known to me as leaders of the Indian community in Glasgow. I vividly remember Noor Bharti recited good poetry laced with nationalistic fervour at one of our National Day Receptions at India House in Edinburg. I will also not forget when I along with my wife Vidya was honoured at the Central Gurdwara at Glasgow and Bebe Nand Kaur, one of the oldest members of the community, did the honours to felicitate my wife with tons of emotional love and affection. 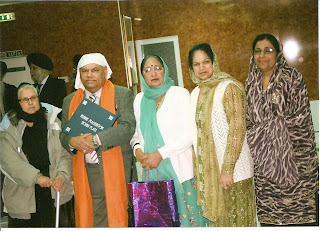 Shivcharan Singh Gill in his introductory essay – Bartania wich Punjabi (Sikh) Parvasi–gives his notion from historical perspective. He wrote that first the Sikh who came to Britain was the last Sikh ruler, Maharaja Duleep Singh, not of his own volition but as a sort of forced stay imposed by the British rulers. A renowned architect, Ram Singh was invited by Queen Victoria in 1864 for building some important palace at Isle of White. Ram Singh returned after two decades in Britain and later designed and built the historical building of Khalsa College Amritsar. Gurdeep Singh Puri, in the prologue of the book – Savey-Kathan “Ki jana Mein Kaun?’ wrote about his humble origin in a remote village of Moga. This brief narration speaks loudly about his down to earth literary approach – 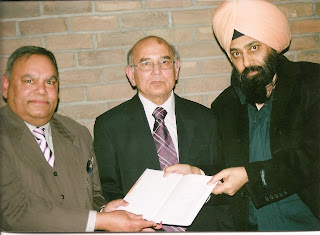 Gurdeep Puri in one of his essays – Paise Da Rajiya, Nindre Da Bhukha – Amrika-  wrote that life in America was not easy. He said that America was a land of selfish people. It is the land of people who push each other aside to make way for themselves. On the other hand, Puri appreciates that personal liberties were much respected and protected in America. And about Britain, his home of choice, Puri writes that ‘British people are thirsty of love – Pyar De Trehay’. He concludes that Britain is a beautiful country of good people. The essay of Sarvjit Kaur Sanghera is good. She reveals the inner feelings of the young ladies back home when their husbands leave for foreign lands to earn their bread and butter –

The essay – Mitti Na Phrol Jogia – written by Gurdev Singh Virha of Glasgow is also interesting. He was a well-placed trained teacher back home in Punjab in the early 1950s. His shifting to the UK reveals the mindset of people who wanted to go to foreign lands just for the heck of it. The narration of Charan Boparai of Birmingham touches yet another aspect of their life. How their kith and kin or other land grabbers swindled their properties or their share of properties in their ancestral fortunes. Balwant Singh Sagoo, an octogenarian in Glasgow, was still young in mind and heart when I met him a number of times in community functions in Glasgow and Edinburgh. His write up in the book traces his family history of traversing foreign lands in the 1940s. His father migrated to Basra in Iraq and later to Kenya in East Africa. His conclusion is, it seems, truthful. He frankly admitted that it was difficult for him to understand as to what he gained or lost on being an immigrant. He lived a contented life, full of struggle with matching achievements.

The second part of the book is a collection of poems. Dr. Gurdev Singh has aptly described the personality of Gurdeep Singh Puri in his Gazal

Dr. Noor Bharti, a good friend of mine in Glasgow, was a talented and dedicated community activist. In his poem, he lamented that our prosperity in foreign lands resulted in increased jealousy back home:

The book makes an interesting reading particularly for those who even after spending formative years of their lives abroad still yearn to go back to their roots in India. I have no attention and mind to be a literary person. I intended to share with you the book of a good person and a leader of the Indian community, Gurdeep Singh Puri, posthumously, as he died a few years ago at a comparatively young age. I cannot forget him and always carry with me the cherished memories of my association and interaction with the Indian community in Glasgow. Just to give you the flavor of their love and affection, I quote here a couple of lines of Gurdeep Singh Puri’s poetry which he recited at the farewell they accorded to me at Glasgow on my transfer from Edinburg:

Posted by ramesh chander at 4:15 PM