I wrote about the launch of celebrations of Guru Ravidass Utsav at Bootan Mandi Jalandhar on February 2 in the earlier issue of the Desh Doaba and the Ambedkar Times.  You may be aware that Bootan Mandi Jalandhar remained a nerve centre of the dalit consciousness for decades. The residents of Bootan Mandi and its vicinity are ardent followers of the great Guru Ravidass, a harbinger of equality, brotherhood, harmony and peace. As such Guru Ravidass Purab is celebrated with all solemnity and frolic by the devotees and the fellow citizens to pay tributes to the Guru every successive year. Over the years, the event has occupied an important space in the socio-cultural life of the city of Jalandhar in the form of a Mela for a week or so.  The Mela provides spiritual, cultural and social inputs to the daily life of a common man in a spontaneous manner in these days of stress and anxiety. This year was no exception. I remained, along with my immediate family, to my pleasure, a humble participant in these celebrations not only as a humble follower of Guru Ravidass but also as a proud BootanMandian too.

The celebrations started on February 2 at Satguru Ravidass Dham with a traditional ceremony of “Path Rakhna” – start of the festivities with the recital of Guruvani. Some of the highlights of the activities at the Dham throughout the week till February 7 included daily Kirtan Darbar by some of the best Ragi Jathas of the area like Bhai Darshan Singh Komal among others to the delight of the faithfuls who thronged the Dham in large numbers with a sense of spiritual fervor. The Langar (Community Kitchen), organized on volunteer basis, on all the days was very much relished and
appreciated by the people. The Dham, as usual, was specially
spruced up and illuminated for the celebrations. It is a matter of satisfaction that the day to day functioning and ceremonies at the Dham were very well looked after by the young Sant (Priest) of the Dham, Swami Balram Virdi, the worthy son of Swami Lalji Dass of Bootan Mandi itself. There was yet another new feature, in these days of media and internet, that the management ably spearheaded by Prof. Mahesh Chander engaged Aaj Tak – Aamne Samne and Ekta TV Channels as the Media Partners of the Utsav. All the major programmes starting from February 2-9 were streamed live for the benefit of the general public to spread the lofty mission of the great Guru Ravidass. It will not be out of place to mention regretfully that that the biased traditional media generally tended to ignore the activities pertaining to weaker sections of the society but now a days the alternate media has stated to play a positive role to undertake the issues of concern and interest to the community at large. Perhaps it is one of the reasons why I have ventured to write in somewhat details about these activities back at home for the benefit of our brethren living abroad through the columns of the Desh Doaba and the Ambedkar Times, a pioneer in taking care of the under privileged.

The festivities culminated in the grand Shobha Yatra on February 8 which was started from Guru Ravidass Dham at Bootan Mandi by Senior Deputy Mayor Surinder Kaur, herself a worthy daughter of the Bootan Mandi area and from Ambedkar Park by Former Chief Parliamentary Secretary Avinash Chander and Seth Mool Raj, the scions of the legendary dalit leader Seth Kishan Dass, my fellow BootanMandians.  The Shobha Yatra, as expected, was a sea of humanity showing spontaneous respect and regard with reverence to Guru Ravidass. I joined the Yatra at Bootan Mandi and later received the huge show of flowing humanity at the Langar on the way arranged by my brother Krishan Lal in cooperation and support of his business associates and our humble family. It was the 30th year of the Langar, it is a matter of satisfaction, which was formally declared open by a social activist Lekh Raj Mahey and his spouse Kamla. Krishan and his associates at Soccer International started this good activity when there was hardly anyone to even provide water to the participants in the Yatra. Now there are many 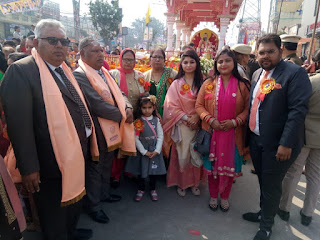 Langars and welcome stalls and podiums on the entire route of the Yatra. It was estimated that more than 10 thousand people partook the Langar where I spent my time and enjoyed receiving the Tableaus and Jhankis of the Yatra with singing and dancing with spiritual connotations. At the Langar venue the team of Ashok Nimana, a regular the Langar since its inception, regaled the Yatris with missionary songs and music to add colour to the occasion.

The D-Day, Gurpurab of the Guru on February 9, witnessed a huge Kirtan Darbar at Guru Ravidass Chowk which was concluded with the Bhog ceremony of the Amritvani. The kirtan rendition done by the famous Ragis of the region, Bhai Yashpal Singh and others worked as a balm to the souls of the audience. It goes without saying that the Vani of Guru Ravidass is as relevant today as it was
before and will remain so in the years to come till the lofty ideals of equitable world order is established. It was my honour to speak at the Kirtan Darbar. While providing the historical perspective Guru Ravidass Purab at Bootan Mandi, I noted and underlined the lofty message of brotherhood and community life rendered by the great Guru in his Vani as “Keh Ravidass Khalas Chamara; Jo Hum Sehri Woh Meet Hamara”. In the evening, a grand Sangeet Darbar was held at the huge Pandal created for the purpose which was presided over by President of Guru Ravidass Educational and Charitable Trust, Om Parkash in the presence of senior Trustees like Seth Sat Paul Mal, Mayor Surinder Mahey, Manohar Mahey, Paramjit Mahey, Sat Paul Mahey, Prem Shant among others. Some of the famous performers
like Mohan Waris, Shah Sisters, Sardar Ali, Gurlej Akhtar entertained and regaled the mammoth crowd of devotees and faithfuls. Mohan Waris stole the show with his new composition “Bootan Mandi Lagya Kanshiwale Da Mela” and people were fully engaged in his rendition. Leader of the area, MLA Sushil Rinku along with his gracious wife Councilor Sunita joined the Sangeet Darbar to greet the public on the Gurpurab and was good enough to announce a grant of 11 lakh Rupees for the construction programme of Guru Ravidass Dham which was much applauded and appreciated by the management and public. Paramjit Mahey, my younger brother, who was the lead speaker at the Darbar said in his emotional speech that Guru Ravidass did a lot for us and in his poetic assertion he added in his tributes to the great Guru “Farshan de Uton Chuk Sanu; Arshan Tak Pahucha Dita” Prof Mahesh Chander, a young and educated scion of our family, conducted the Darbar successfully with élan and befitting manner as the newly appointed General Secretary of Guru Ravidass Educational and Charitable Trust. The celebrations and festivities which has become yet another feather in the cap of Bootan Mandi and be an additional milestone in the fascinating journey in celebrating the revolutionary Guru Ravidass, were concluded with a vote of thanks and payers to continue our humble efforts to revere and remember our great Guru with a clear resolve:

Posted by ramesh chander at 5:10 PM