Sikh Gurdwara at Leith in Edinburgh

Sikh Gurdwara at Leith in Edinburgh

Guru Nanak Gurdwara at Leith, a coast town on the outskirts of Edinburgh, the capital city of Scotland of the UK, is in the news for wrong reasons of arson attack a couple of days before by some unknown elements which are still to be identified.  Some mad caps do these “deliberate” acts of “hate crime”. A similar act of arson took place in 1989 too. Edinburgh is a historical city with multicultural heritage. Scots are tolerant people. The First Minister of Scotland, Nicole Sturgeon condemned the attack and termed it as “appalling “and rightly so. I can say this after my association with 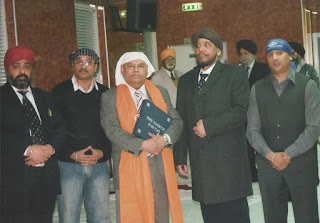 Scotland, its leadership and also with Guru Nanak Gurdwara at Leith and its management as the Consul General of India based in Edinburgh in the mid 2010s. I am confident that the administration will handle the matter with care and concern. The Sikh community in and around, though not big, is resilient enough to withstand the onslaught by some anti-social elements. The local government of Scottish National Party (SNP) and the national government in London simply cannot allow to hurt the religious sentiments of not only of the Sikhs, a prominent and prosperous community in Scotland, but also to disturb the social and spiritual harmony of the society at large.

Sikh community in the UK is well settled and is vibrant. They have done well in Scotland too. It was a pleasure to interact with the community in capacity as the Consul General of India in Edinburgh.  Guru Nanak Gurdwara in Leith is a historical landmark in Edinburgh housed in church of 1843 vintage. The Sikh community purchased the church and converted into a Gurdwara in 1976. I visited Guru Nanak Gurdwara a couple of times to pay obeisance and join in the celebrations. It will not be out of place to mention that Sikh community in and around Edinburgh is not very big, about 500, as compared to community in around Glasgow. A special feature is that the Sikh devotees at Leith Gurdwara belong to a somewhat distinct segment or sub-sect of the community which are still traditional in their day to day life. The veil (Ghunghat) by the ladies, traditional dress sense, marriage or death ceremonies as per the old norms are still observed even after three generation of their migration to the UK. I don’t know how far it was correct but I was told that even alcoholic beverages were served on special days as ‘Parsad’ in the Gurdwaras. With my interaction with the community, I found them living in a foreign land of their choice but still having strong bonds of belonging with their native place India and its culture and tradition. It was gratifying to see that they were the true followers of Sikh tenants “Kirat Kar Te Band Sak” without any visible trace of fundamentalism.

I cherish my memories of interacting and socializing with the Sikh community in Scotland.

Posted by ramesh chander at 9:53 AM