PM Atal Bihari Vajpayee (1924-2018) is no more. An era in the political life of India ended yesterday, August 16, 2018 with the demise of Vajpayee Sahib, one of the greatest sons of India in the contemporary times. He was a tall figure, with a distinct personality, in the political crowd of India. He became an MP at comparatively a young age, got elected 10 times to remain in the parliament with a unique distinction of representing four states like MP, UP, Gujarat and Delhi for different terms. It is said in Hindi, “Honhaar Birban Ke Chikne Chikne Paat”. PM Jawaharlal Nehru was so impressed by the personality and conduct of the young Atal Bihari Vajpayee that he visualized him to be the future PM of India. It came true and Atal Sahib, as he was affectionately called by his colleagues and friends, adorned the high office of PM of India not once but three times including a full five year term from 1999-2004. He was a leader by his own right and rightly so. The most prestigious awards and honours were conferred on him, Padam Vibhushan, Best Parliamentarian and ultimately the highest civilian honour Bharat Ratna in 2015. Atalji was an orator par excellence as we call it in Urdu “Jadu Bian Mukarrar” with vision and thought. His sane and balanced approach in the political councils and corridors of power will be greatly missed in the years to come.

On hearing of the passing away of Vajpayee Sahib, I wept as a mark of my respect and regard to the great man. I have had opportunities to see, meet and interact with him in the course of service in the Ministry of External Affairs (MEA) and the PMO. I was greatly impressed by his personality and charm even in my formative years in Jalandhar when Atal Bihari Vajpayee did a road show in an open horse-driven Baghi (carriage) in 1968 as the newly 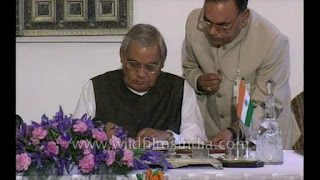 elected President of the Bharatiya Jan Sangh and we greeted him near the Patel Chowk as young students. Then in 1977, when Janta Party came to power in the aftermath of emergency, it fell on me as a humble functionary in the PMO to escort Vajpayee Sahib to the first cabinet meeting of the new government of PM Morarji Desai.  Thereafter, many opportunities came my way to see him working closely as the Minister of External Affairs during his interaction with his foreign counterparts during the course of my duties as Protocol Officer in the MEA and PMO. I distinctly remember Vajpayee Sahib interacting with his Russian counterpart in Hindi and the terminology he used, referring to the traditional friendship between India and the USSR, he said “Ganga aur Volga mein bahut paani behe chukka hai, ab waqt hai hum aage badein aur apni mitrata ko majboot Karein”. It was a pleasant change in our approach to take pride in our national language.  Next, I met the great leader in Beijing, then Peking, in China in 1978 during his official visit. I was posted in Beijing  as an Attaché. There were pleasant encounters with him and these anecdotes I save for some other occasion. My real and close work and interaction happened after Vajpayee Sahib became PM for the second and third term in 1998-99. I was the Director of Central Asia Division in the MEA from 1997-2000. The Central Asian region, India’s near neighborhood, is very important in our foreign relations and policies. It was my good fortune to see and interact with PM Atal Bihari Vajpayee during the high and summit level visits from the Central Asian countries. I vividly recall his meetings and interactions with his Uzbek and Kyrgyz counterparts. PM Vajpayee exercised his great charm and a great sense of history in dealing with his Central Asian visitors. My cherished possession from one of these interactions is a photograph with PM Vajpayee and the Uzbek President very gracefully autographed my Vajpayee Sahib himself. Vajpayee Sahib was not only a politician of standing and caliber but also a fine and apt diplomat.  Again, I will not like to burden my readers with personal anecdotes here with a view to maintain the solemnity of the occasion and close this tribute on the sad demise of our beloved leader.

The legacy of PM Atal Bihari Vajpayee which will remain, to my mind, is that he considered Dal i.e. party, above the individual and Desh i.e. country, above the Dal. This is the most needed input or ingredient in our polity and politics to ward off the dangers to our independence which was very dear to Vajpayee Sahib as Babasaheb Ambedkar warned, “We are going to have many political parties with diverse and opposing political creeds. Will Indians place the country above their creed or will they place creed above country? I do not know. But this much is certain that if the parties place creed above country, our independence will be put in jeopardy a second time and probably be lost forever. This eventuality we must all resolutely guard against. We must be determined to defend our independence with the last drop of our blood.”

May the soul of PM Atal Bihari Vajpayee rest in peace.