Down the Memory Lane - Stockholm

Down the Memory Lane - Stockholm


Yesterday, July 17, It was one of the hottest and sunny days of this summer in Stockholm. The Administration had issued warnings to remain inside, drink more water, don’t grill outdoor etc. as general precautions during hot dry spells in Sweden. Honouring my liking for Chinese cuisine, Anju and Naresh and also children, Pallavi and Arvind, decided to go to the downtown Stockholm in the evening for moving around and taking a good buffet at a Chinese restaurant, Chopsticks.

We decide to park at the underground parking of 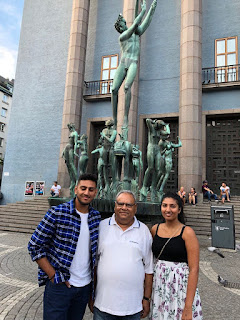 Hötorget Tory (Haymarket) off Sveavägen. My memories of the area came alive. We passed by the famous Church Adolf Fredriks where the grave of Swedish PM Olof Palme is located. My place work in early 1990s, Embassy of India, is located near by at one of corners of a prominent thoroughfare, Drontheninggattan and Adolf Fredriksgatan. During lunch breaks on some days, we used to unwind in the
lawn of the church. We stopped at the impressive building, Koncerthuset, a place for musical concerts and social gatherings, and took some photos. Walking through the inner lane from Hötorget Tory to the Chopsticks, I was reminded of the offices of Air-India and India Tourism offices in Stockholm in those days. It was my second visit to the Chopsticks. One of my Filipina diplomatic colleagues hosted me for a lunch there in 2003 when I came from Tokyo to visit my son. It was a good fusion of Chinese, Japanese and Mongolian spread which was not bad. On our way back, we strolled around a bit on the Drottninggatan talking  about Indiska, a Swedish chain of stores selling goods from India and the terrorist incident at this spot a few years before when a hotheaded terrorist drove a heavy truck cushing many innocents. I vividly recalled my several walks on Drottninggatan to and fro the Embassy and the Swedish Foreign Office in the pleasant and instructive company of my boss, Ambassador P.S. Sahai, for official callings. Ambassador Sahai was a compulsive walker and most of the time preferred to walk, particularly on return journeys. We detour a bit in the car to see, Kulturhuset, the hub of cultural activities at the famous Sergal square and passed by near the India House at Villagatan, the official residence of the Indian Ambassador to Sweden. It was a pleasant evening which rekindled my cherished memories of city beautiful, Stockholm. Thanks Anju, Naresh and my lovely grandchildren.
Posted by ramesh chander at 12:52 PM