The Scheduled Caste communities of Punjab may or may not have taken note of some of the latest moves and decisions of the Government of Punjab under the stewardship of Chief Minister Captain Amrinder Singh with regard to several issues and matters of concern to them. That is why I have decided to avail of the opportunity to underline and highlight these appreciable actions 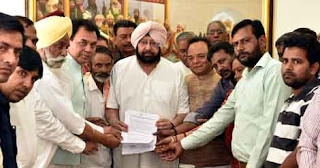 and thank CM Captain Amrinder Singh and his team. This is all the more important, as per the media reports, that some of the Scheduled Caste MLAs were finding themselves ill at ease as the community has, prime facie, not been given due and desirable presentation in the government and the administration which the media has termed  “CM seeks to assuage dalit sentiments”. CM Captain Amrinder Singh’s approach seems positive and appreciable.

·       Samvidhan Chowk at Phagwara – It is a right and timely decision in the face of unnecessary ruckus created by the anti social elements under the guise of right-wing Hindu outfits. Why should there be any objection to naming a non-descript Gole Chowk in a more befitting and dignified way as Samvidhan Chowk. CM Captain Sahib has rightly said, “There is nothing wrong in naming 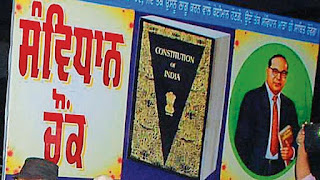 the roundabout as Samvidhan Chowk as our constitution does not belong to any particular caste or creed.” It was surprising to note that the Municipal Head of the town, a BJP man, and the local MLA, again a BJP man, have criticized the government decision whereas they should have welcomed the decision and advised the fundamentalist Manuwadis to talk sense and stand with their SC brethren. The marginalized stakeholders, to my mind are no more interested in mere lip service of the right wing Hindu forces. They want delivery on ground. The SC agitators for the right cause also deserve commendation who kept the vigil and alertness in spite of undue and uncalled for provocations from the so called general category as the true followers of Babasaheb Ambedkar.

·       Ambedkar College at Bootan Mandi – the government of CM Captain Amrinder Singh also deserved full marks and appreciation for their recent decision to meet and honour the rightful and
longstanding demand of the people of the area to have a college for girls at Bootan Mandi which would rightly and thoughtfully be named after Babasaheb Ambedkar. I think MP Chaudhary Santokh Singh, MLA Sushil Rinku and Senior Deputy Mayor Surinder Kaur  among others should be thanked and congratulated for the good work in this regard. I have been writing about the project as a humble resident of the area which may be of interest: http://diplomatictitbits.blogspot.in/2017/11/ambedkar-college-at-bootan-mandi.html.

·       Guru Ravidass Memorial at Khuralgarh – Guru Ravidass Memorial was crying for attention since long. The earlier governments were taking ad-hoc decision eyeing the ‘Vote Banks’ closer to elections. The Akali-BJP government started the project without budgetary layout. The current government of CM Captain Amrinder Singh has announced Rupees twenty crores for the project which is a welcome step. Due recognition of icons of the marginalized sections of the society would ultimately lead to their empowerment which is the need of the hour.  We must thank and congratulate CM Captain Amrinder Singh and his team for this commendable decision. I have been writing about the Khuralgarh project in my blog as a humble follower of the great Guru which is available on: http://diplomatictitbits.blogspot.in/2016/04/guru-ravidass-memorial-at-khuralgarh.html

·       Adampur Airport to be named after Guru Ravidass – The Punjab Legislative Assembly has done well by passing a Resolution to name the Adampur airport after the name of Guru Ravidass, a great Guru who stood against the torturous caste system and propagated the principles of liberty, equality and fraternity which later became the core values of the constitution of India.  I fully support and endorse the decision of the Punjab government which has already been communicated to the Ministry of Civil Aviation in Delhi. I am confident that the central government of PM Narendra Modi will accept the recommendations of the Punjab Legislative Assembly and also the wishes of the millions of followers of the great Guru who live in the Doaba region and beyond not only in India but abroad also. Naming the airport after Guru Ravidass will go a long way in providing impetus to affirmative actions of the government and the society at large to empower the weaker sections of society by giving them psychological and moral support on one hand and will also be considered a befitting tribute to the social and spiritual icon Guru Ravidass.

I wrote this piece sometime before in my blog and have merely reproduced for the sake of cohesion. Punjab Government under the leadership of CM Captain Amrinder Singh deserves felicitations in this regard too.

Speaking demographically, more than 33% population of Punjab belongs to SC communities, the highest in any of the states of India. They obviously expect their due share and space not only in the polity, economy, administration, culture, education but also in the society at large as equal stakeholders and rightly so. Any government ignoring this fact will do so at its own risk. For my fellow SC brethren:

Posted by ramesh chander at 8:28 AM