Of late, Ambedkar Jayanti has increasingly become a day of great importance and significance both in India and abroad. On one hand, it is a matter of great satisfaction that the iconic personality of one of the greatest sons of India is getting due recognition and rightly so but on the other it has become a triggering point for some sort of social and political confrontation which is worrisome. We, as a democratic society, must ponder-over this before it becomes too late. Both the government and the civil society should consider and handle this sensitive situation without delay. Pushing the dirt under the carpet will not help. All political outfits are falling on each other to claim Ambedkar and his legacy owing to obvious reasons of ‘Vote Banks’. The followers of Ambedkar are increasingly getting assertive and vocal for their rights and due space both in the polity and society as equal stakeholders. The Thekedars, fanatic Hindu Right-Wingers, of the upper-crust of the society following

the traditional manuwadi mindset in the caste ridden social and economic order are not yet ready to shed their sense of superiority. Here lies the problem which needs to be addressed with tact and foresight. Babasaheb Ambedkar stood for ‘Samta and Samarasta’ – Equality and Equitable Order - in the society and the country at large. He pleaded to adopt constitutional and non-violent methods and approaches to get redressal of grievances, if any under the laws of the land. The political leadership and the society at large must understand and heed to the warning of Dr. Ambedkar that if our poltical democracy is not transformed into social and economic democracy as stipulated and enshrined in the constitution we would tend to subscribe to “Grammar of Anarchy” and put our independence into peril. Let us follow Ambedkar in a larger context. Babasaheb was not a dalit leader. He belonged to India that is Bharat and to the whole world as an international humanist.  Administrator of the UNDP, at a function in the UN in New York on April 13, 2018 to celebrate Dr. B.R. Ambedkar’s birth anniversary under the theme of UN’s goal ‘Leaving No One Behind’, said that “B.R. Ambedkar’s ‘efforts’ towards ensuring excluded groups were politically and socially empowered and made him a “pioneer” in the world and his vision of equality and social justice echoes the ambitions of the UN’s 2030 development agenda.” Let nobody stop anybody to own, respect and follow Babasaheb Ambedkar in the larger interest of establishing a casteless society based on the lofty principles of ‘Equality, Liberty and fraternity’. It will be a befitting tribute to the great leader, Dr. B.R. Ambedkar.

As a small and humble Ambedkarite, I participated in some of the events to celebrate the Jayanti of my icon to pay my debt of gratitude and homage to Babasaheb Ambedkar:

·       Participated in the Ambedkar Chetna March on April 13 which commenced from Bootan Mandi Jalandhar. It was a great show by the followers of Babasaheb. It was gratifying to note that over the years the Chetna March has become a regular event in the social 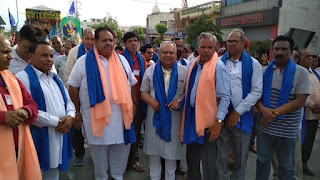 and cultural life of the city of Jalandhar on the eve of Ambedkar Jayanti. The Chetna March was spontaneous and voluntary on the part of the Ambedkarite followers. All efforts should be made in the years to come that the event becomes a landmark of discipline and democratic manifestation to remember the worthy son of the soil.

·       Participated in a prayer meeting on the morning of April 14 to pay homage to Dr. Ambedkar at the Jalandhar RSS complex along with Community activist Ram Gopal, Educationist Principal Ravi Sharma, Advocate Balraj Sharma, Politicians Manorajan Kalia and K.D. Bhandhari, Editor Rakesh Shantidoot, among others.  Special numbers on Babasaheb Ambedkar of the two periodicals ‘Yug Bodh – Punjabi and Pathik Sandesh’ were released at the function. I underlined the much needed approach, in my brief remarks, that 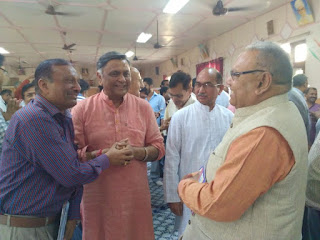 RSS, a well organized outfit of the Hindu society, should see to it that good things said in the prayer meetings in closed rooms trickle down to the grassroots to benefit the society. The public perception of the RSS and its activities, particularly among the dalit masses, required to be changed by associating them to the mainstream of the society as equal partners. I also added that India was India, in spite of many ups and downs in the process, because of the constitution of India which was given by our forefathers under the stewardship of Babasaheb Ambedkar. I also warned that any attempt to change or dilute the fundamentals of the constitution will amount to an invitation to a ‘bloody revolution’ which Dr. Ambedkar and his followers never wanted and supported. The secular fabric of the polity and society needs to be preserved and protected at all costs as visualized and stipulated by Babasaheb. Many of my friends may not like my going to the RSS for the event. But I am open to sit with them and discuss the matter, if need be.

Postscript: In fact, many of my friends, self proclaimed Ambedkarites, have already started abusing me on social media. Some of them have even suggested or threatened to do my “Mera Hukkapani Bandh”. Should they be still called Ambedkarites?

·       Participated at a celebratory function to remember Dr. Ambedkar at Bolina Doaba, a historical village in the out-skirts of Jalandhar, to pay tributes to the great leader along with known environmentalist Baba Balbir Singh Seechewal, an accomplished educationist Principal Jagroop Singh of Mehr Chand Polytechnic College, a renowned Punjabi films actor of yesteryears Satish Kaul, a worthy 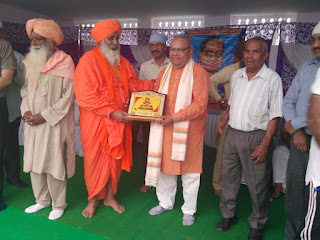 son of Bolina, former Chairman of Punjab SC Commission Rajesh Bagha, a renowned literary critique Desraj Kali, Editor Rakesh Shantidoot, Social activist Sarwan Dass Bolina among others. My cherished memories became alive. I visited Bolina many a times in my younger days as a student to participate in the ‘Vidyak Samagam’ which was regularly arranged at Bolina under the patronage of Babu Sarwan Dass Bolina, one of my family friends. Sarwan Dassji was a source of inspiration to many of us in the 1960s.

·       Joined the large congregation of Ambedkarites at Ambedkar Bhawan at Jalandhar under the aegis of Ambedkar Mission Society, Ambedkar Bhawan Trust and Samta Sainik Dal and paid homage to Babasaheb. Fiery speeches by Dr. Gian Kaul, Chandan Grewal and Lahori Ram Balley clearly depicted the mood of the restless audience in view of the tense situation prevailing in the society due to recent political events. Dr. Chaman Lal, a left oriented intellectual, was the key note speaker. Referring to the RSS and BJP’s alleged agenda to subvert and change the constitution, Dr. Chaman Lal said that Ambedkar himself wanted to tear and burn the constitution as it did not turn out to be conforming to his liking. He obliquely hinted that yes, the constitution would be reviewed and changed to suit the under privileged and proletariats. He also underlined the need of cooperation and joining hands by the votaries of Jai Bhim and Lal Salam. The high-ups sitting on the 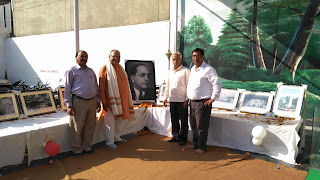 high table and the audience clapped. I was wondering whether the message was understood or it was just to keep ourselves blissfully happy. There are questions but only time will throw the answers. A good photo exhibition of Babasaheb’s rare photos was arranged at the podium of Lord Buddha’s statue at the Bhawan Complex. I was told that it was the initiative and endeavor of one our Ambedkarite enthusiast Gurdev Chand. I met and thanked Gurdev Chand for his thoughtful gesture.

·       Doordarshan (DD) programme on Babasaheb Ambedkar was a good exposure but the time was too short. Desraj Kali is a staunch Ambedkaite and a literary thinker of standing. Advocate Santokh Lal Virdi is an intellectual and community activist of worth. It was 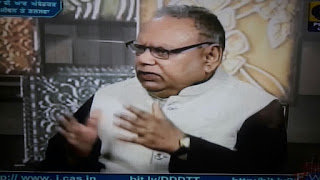 rewarding to join and sit with them to talk about the greatest son of India, Babasaheb Ambedkar. DD Jalandhar has been thoughtful and cooperative in remembering and felicitating dalit icons as a professional channel of information and communication to the benefit of the public. I appreciate and commend the DD Jalandhar management.

The idea of writing these details is to generate awareness among the general public about the legacy of Babsaheb Ambedkar.