Spiritual Tourism and Guru Ravidass – Indian society is multi-cultural and multi-religious. Caste consciousness has tended to make various communities do something to establish their separate identity. The followers of Guru Ravidass are no exception. They have also started thinking, on the lines of other communities like Sikhs, Jains, Parsees, Buddhists etc. and also the main stream 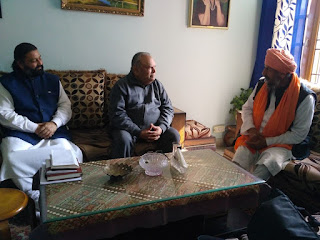 religions like Hindus, Muslims and Christians, to have their own sites and places where the faithful may go for spiritual pilgrimage. My motivation to write on the subject emanated after my recent brief interaction with the National President of Ad-dharam Mission, Sant Satwinder Singh Hira. He told me that they have explored and identified a place, down south in the city called Tuticorin (Kanyakumari) in Tamil Nadu which Guru Ravidass is believed to have visited in the 15th century during his various spiritual sojourns throughout the country. The place is called “Land of Ellora”. Banta Ram Ghera, a social and spiritual 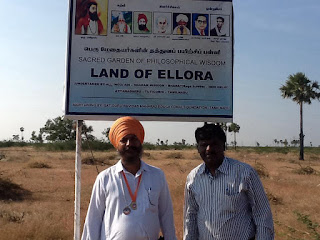 activist of the Ravidassia community who was closely attached to the Ad-dharam Movement of Babu Mangu Ram Mugowalia did a great job in this regard. It will not be out of place to mention that Banta Ram Ghera was the chief explorer and leading personality to start the development of the birth place of Guru Ravidass at Seer Govardhanpur in Kanshi (Varanasi) in the 1950s-1960s with the active support of Sant Sarwan Dass of Sachkhand Ballan of Jalandhar and the community at large. The foundation stone of the Seer Govardhanpur Dharamasthan was formally laid by Sant Haridass, under the patronage of the great Sant Sarwan Dass. The rest is history. Now Seer Govardhanpur Dharamasthan has become a hub and catalyst of Ravidassia religious and social identity under the administrative control of Dera Sachkhand Ballan. The political big-wigs remain on the lookout for an opportunity to pay obeisance at the holy place. President K.R. Narayanan was the first to set the ball rolling. Mayawati and Kanshi Ram followed suit. Eyeing the Ravidassia community as a potential vote bank, PM Narendra Modi and CM Aditya Nath Yogi, obviously, could not afford to skip and visited the Dharamasthan in recent successive years at the Guru Ravidass Jayanti. And rightly so. President Ram Nath Kovind may not 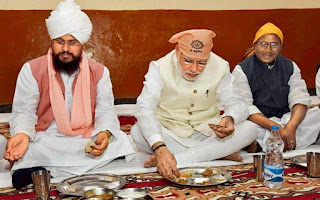 be far behind. Minar-e-Begumpura and Charan Chhoh Ganga at Khuralgarh at Hoshiarpur in Punjab has already been identified and developed as a centre of pilgrimage by the followers of the great Guru Ravidass. Sant Hira told me that they were planning to develop some other places in J&K, Maharashtra, Rajasthan and in Himachal Pradesh to make it as a “Guru Ravidass Trail” for the benefit of the followers of the Guru to meet their spiritual and cultural needs. It is not a bad idea to consolidate the positive influence of the lofty Bani of Guru Ravidass to create social harmony and spiritual fulfillment of the community and the society large. I would like to suggest in this regard that the Ad-dharam Mandal should endeavour to engage not only the governmental authorities but also all well meaning dalit outfits to achieve this goal.

Relevance of Allama Iqbal – Muhammad Iqbal, philosopher poet and ideologue, of erstwhile united India and later Pakistan, is as relevant today as he was before even though some of the narrow-minded and communal quarters both in India and Pakistan have tried to suppress and marginalize the lofty ideas and philosophy of the great thinker and writer of our times. Though Iqbal is not a favourite of the ruling elite because of the pseudo-nationalism they 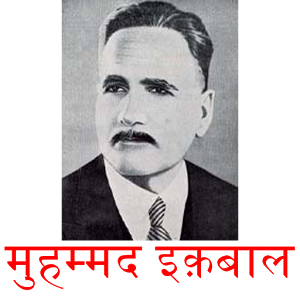 profess yet surprisingly these days, the ones who generally discount him, the right wing Hindus, say of the RSS family, often quote him to convey the importance and relevance of Allama Iqbal by referring to his very thought provoking poetic expression on the culture and tradition of Hindu India, particularly in which he termed Shri Ram as “Imam-e-Hind”:

है राम के वजूद पे हिन्दोस्ताँ को नाज़,
अहले-नज़र समझते हैं उसको इमामे-हिन्द ।
In this regard in a recent debate on a “Cheer leader” TV channel, the spokesman of the BJP was happily quoting the above mentioned couplet and advising Muslim stakeholders to handover the Babri Masjid site to Hindus as Iqbal called him “Imam-e-Hind”. One of the Muslim panelists on the debate countered him and quoted another gem of Iqbal’s “Na samjhoge to mitt jaoge eh Hindustan walon; tumhari dastan tak bhi na hogi dastano mein”. It worked as a red rag to the bull. The BJP spokesperson challenged Iqbal and questioned who he was to say this. How can anybody say that India could be finished? Not that the BJP spokesperson did not understand the context of Iqbal’s expression but it was clearly evident that he was in no mood to admit that Iqbal was a great man of vision. It is unfortunate and sheer narrow-mindedness.

Iqbal was a great thinker of all times. I like his “Qalaam” as a lay man. His many renditions and expressions clearly demonstrate and establish that he was a staunch nationalist and proponent of India and her tradition and culture. What happened later in his life time is history which most of us know. Some of his famous and thought provoking poetic compositions still make us stand in spirited pride and patriotic fervor and well placed nationalism. Let us accept this reality as Allama Muhammad Iqbal will remain relevant in the years to come as he was before. Can we ignore and forget the everlasting tarana “Sare jahan se accha Hindustan hamara”? No, we cannot. Will we not laud him when he says “Yunanon misro roma sab mit gaye jahaan se; ab tak magar hai baki naamo nishan hamara”? Will we not acclaim him when he says “Nanak ne jis chaman mein vaihdat ka geet gaya; mera watan vahi hai”? Did he not lament the erosion of Buddha’s message of peace when he wrote:

(The nation could not care less about Gautama’s message—It did not know the price of its unique pearl!)
Much more could be said but I will contend by quoting only one more:

Happy Valentine’s Day – Today is Valentine’s Day. My hearty greetings to you all. Generally, I don’t practice any excessive rituals on this day and view it as any good and happy occasion in these days of strife and conflict. But Valentine’s day remains in my psyche after the year 2001. I fell seriously ill with a brain haemorrhage while in office in Tokyo on February 12, the so called Hug Day. I almost hugged death. On February 12-13, I was in the ICU, almost kissing death, the so called Kiss Day. But God is great. I was saved and was moved to a designated room in the hospital on the morning of February 14, the Valentine’s Day. My wife Vidya 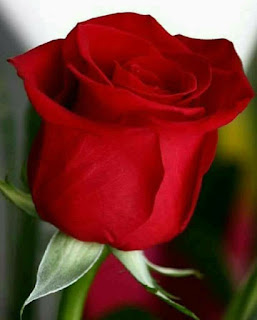 was alone with me as my daughter Vaishali and my son Rupesh had gone to Stockholm to oversee the birth of my grandson Arvind who was born on February 4 that year. Vidya did not remember the V Day. My office aide, Chander Prakash came to see me and wished me well but without mentioning the word V. But a pleasant surprise was to come. After the close of the day at the Embassy, the entire local staff i.e. Japanese, Filipino and Indian came and filled my room with profound and hearty Valentine’s Day wishes and greetings with chocolates and variety of roses to share. Many young and gracious girls kissed me spontaneously. After the hugs and kisses with death, I felt I was flying in the sky of love on that Valentine’s Day of February, 2001. It will remain with me as a cherished memory.
Happy Valentine’s Day.

Posted by ramesh chander at 6:29 PM