Scheduled Caste Entrepreneur Empowerment Forum (SCEEF) - an organization, still in its infancy, organized its 1st Begumpura International Business Conclave, 2018 at Jalandhar on February 6, 2018. The motto of SCEEF “Stepping towards Social Transformation through Economic Empowerment” itself explains the purpose of the Begumpura International Conclave. It was a modest effort to begin with but a successful one with good participation from abroad which included known and prominent personalities of dalits like owners and promoters of Kanshi TV (UK) Hans Raj Banga, Bibi Bholi Randhawa, Raj Bangar, Balbir 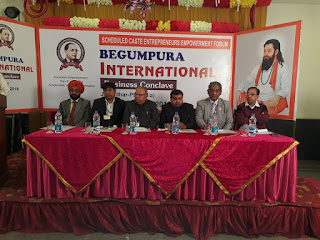 Kaler, entrepreneurs namely Tilak Bagha, Desh Raj Mehmi from Germany, Italy, UAE, among others. They keenly interacted with the executives of SCEEF and its members to explore, identify ideas and opportunities to establish mutually beneficial business ties. It was a matter of satisfaction that, of late, dalit entrepreneurs have started to understand the nuances of good business and are slowly getting prepared to join the mainstream to not only earn their bread and butter with dignity but also to contribute to the betterment and empowerment of the socially and economically weaker sections of the community and the society at large. I am confident that SCEEF will play a good facilitatory role in this regards. The proceedings of the function was ably conducted by the Working Chairman of the SCEEF, Jiwan Singh.

I was invited to preside over the function which was an honour for me. SCEEF treats me as their Chief Patron. Former Chairman of Punjab SC Commission Rajesh Bagha is the leading light of the SCEEF with a dedicated team of social and political activists like Jiwan Singh, Bhupinder Kumar, Prem Domeli, Prof. Akshay Kumar, Shammi Kapoor among others and duly supported by businessmen, inter alia, Gurdev Mahey, Ishwar Johal, Ajay Kaul and also Manjit Bali who is a Member of the Ambedkar Foundation of the Ministry of Social Justice and Empowerment. It may not be out of place to mention that SCEEF has explicit support and encouragement by the outfits of the ruling BJP due to Rajesh Bagha and Manjit Bali who are affiliated with the party. As such the government organizations like National Small Industries Corporation, Sports Goods Export Promotion Council, Ministry of Small and Medium Enterprises are extending all due assistant to the SCEEF which is an added advantage. There is no harm in taking advantage of such arrangements as we have nothing to lose but much to gain. The NRI delegates under the stewardship of Hans Raj Banga made brief remarks and registered their appreciation of the initiatives and efforts of SCEEF to promote and support business acumen among the dalit entrepreneurs. As I mentioned earlier, field organizations of the BJP were represented by Dr. Varinder Garg, OSD to the India’s Minister of Health and by Vijay Nadda of Vidya Bharti. Dr.Garg spoke at length on the SC Sub Plan to provide statutory backing to the SC empowerment schemes and programmes. Vijay Nadda underlined the importance and relevance of the ‘Samrasta, Samagrata and Shohaardh’ in the society to integrate the socially and economically weaker segments of the society with the national mainstream. Senior Executives of NCIC and EEPC, Anil Verma and Opinder Singh respectively made brief presentations on the schemes and facilities to empower and support SC businessmen and showed keenness to help the entrepreneurs. Hans Raj Banga, in his characteristic simplicity said that they would be too happy to work with their brethren in Punjab to help them stand-up in their respective businesses and offered the services of Kanshi TV to advertise and promote their business interests. Rajesh Bagha was the lead speaker at the event. He spoke at length about his work and contribution in streamlining the post-matric scholarship scheme during his tenure as the Chairman of the Punjab SC Commission and said that the objective of the newly created SCEEF was to work as a catalyst to facilitate the young entrepreneurs to become “job givers instead of job seekers” to find their due space in the polity and economy of the country. He further said that it was gratifying to note that the first Begumpura International Business Conclave which was planned in a hurry to take advantage of the visit of NRI followers of Guru Ravidass for the Gurpurab was a great success. He announced that next year in February, 2019 to commemorate the Gurpurab a planned and bigger conclave will be held not only to provide a befitting tribute to the great Guru but also to provide a proper platform to the aspiring businessmen of the community both in India and abroad. Let me mention an interesting aspect of the event. It was the participation of the National President of Ad-dharam Mission, Sant Satwinder 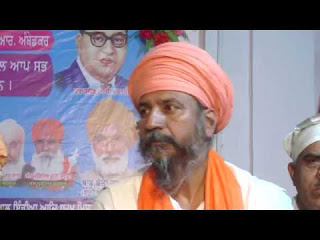 Hira, in the Conclave not as a social or spiritual activist but as a business entity. I was impressed by his credentials and performance as a real-estate developer and exporter of skilled and semi-skilled manpower. Sant Satwinder Singh Hira who is an Engineer himself disclosed his wish to motivate and engage at least a hundred budding SC entrepreneurs within a year and make them successful businessmen. I saw an emerging Baba Ramdev of the community in the persona of Sant Satwinder Hira.

In my valedictory remarks to sum-up and close the function, I offered my humble services and experience to the SCEEF not as the Chief Patron but as a Chief Sewak of the community as my meager contribution to ‘pay back to the society’ as my post retirement activity.  I duly appreciated and recognized the good work being done by the SCEEF under the guidance of Rajesh Bagha and his team which, to my satisfaction, is duly supported by their associates like Dr. Varinder Garg, Vijay Nadda, Chief Editor of an Evening daily “Metro Encounter”, Rakesh Shantidoot among others. Referring to the remarks made by one of the NRI delegates 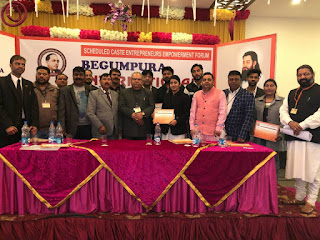 at the Conclave advising the audience that there was no need to seek help from government agencies, I begged to differ and said that there should not be any inferiority complex. These agencies were created for us by our government and we should take full advantage and avail of their services and facilities. These agencies were meant for us. Their assets are our assets as India belonged to us. I added that our icons, Guru Ravidass and Babasaheb Ambedkar stood for equality and fraternity in an inclusive society as enshrined in the bani of Guru Ravidass “Keh Ravidass Khalas Chamara; jo hum shehari so meet hamara” and thoughtfully stipulated in the very preamble of the constitution of India by Dr. Ambedkar, Father of the Indian constitution. Wishing all the best to the SCEEF and participants in the Begumpura International Business conclave, I cajoled them to become self-confident to meet the challenges ahead and concluded with a poetic expression: