Prof. Sarita Tiwari has written the book “Father Mere Puttran De” about her loving husband Prof. Virainder Kumar Tiwari, an intellectual, educationist, administrator and a social activist of standing. The title of the book is uniquely tri-lingual – Father in English, Mere in Hindi and Puttran De in Punjabi and the author’s name i.e. Sarita Tiwari is also shown in these three languages. The author has explained in the beginning why she has opted to write 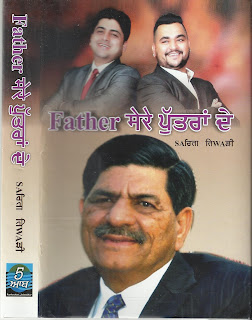 the book in three languages. Father Mere Puttran De, a tribute “Tiwari Sahib Nu Yaad Kardean” on his first death anniversary, October 10, was released at Desh Bhagat Yaadgar Hall in Jalandhar on October 10, 2017 by Lt. Governor (Retired) Iqbal Singh, a politician and a social personality of Punjab, a good friend of Prof. V.K. Tiwari, Kuku for the friends and family. Governor Iqbal Singh and other distinguished speakers namely; Chairperson of Governing Council of Khalsa College Group of Institutions  Balbir Kaur,  niece of Shaheed Bhagat Singh, Gurjeet Kaur Dhatt, Seth Kundan Lal of Local Advisory Committee of D.A.V. College and Gurmeet Singh General Secretary of Desh Bhagat Yadgar Committee spoke very high of Prof Tiwari and paid glowing tributes to the highly regarded son of the soil who, from a humble background of a mofassil town called Alawalpur near Jalandhar rose to coveted positions at a well attended function in which who’s who of the Jalandhar academic and educational circle were present. Sarita Tiwari, the author of the book, who herself is an acclaimed academician and cultural personality of the region, conducted the function herself with obvious emotional involvement. Before the formal release of the book, a dedicated session of musical presentations by the local talent led by no other than Sarita Tiwari herself, sons (Putter) – Mohit and Chetan in attendance, set the mood of the evening in its right perspective. I was invited to the function as a humble acquaintance of Tiwari Sahib whom I met, in recent years after my return to Jalandhar on retirement from I.F.S., and found him a
charming and cultured personality on one hand and erudite and a spell-bound (Jaadu-bian Mukarrar) speaker on the other. Later, after Tiwari Sahib’s death, I met Saritaji and their sons Mohit and Chetan at a SPEED function to name a computer centre in memory of Prof. V.K. Tiwari at Ram Nagar in Jalandhar of which a reference has been made in the book.

In the foreword of the book Governor Iqbal Singh appreciated Prof. Tiwari for his humility and love, put together. The book has been divided into four parts:-

Mere Apne – In this part, tributes and homage of Prof. V.K. Tiwari’s 68 friends, associates and well-wishers, representing cross sections of the society, have been compiled. The author has termed them as “Speaking Dictionaries”.  All of them, in one way or the other, have written very high of Prof. Tiwari bringing out all the good attributes in his dynamic personality which a human being may attain and possess not only to lead a good life himself but also contribute positively to the overall well being of the society at large. Some of them quoted poetry to remember their ‘friend, philosopher and guide’ as Jasreen Kaur of Khalsa College Jalandhar aptly quoted to flag Tiwari Sahib’s down to earth humility:-

Yet another friend of Tiwar Sahib, S. Sondhi, writes that he was an open hearted man with full of understanding  and compassion:-

A couple of contributors mentioned about Tiwari Sahib’s distinctive Urdu-laced mannerism in his routine informal talk like use of words, Hazur, Waah Janab, Hazoorewala, Fouri Tour Pe etc. I may also testify that Tiwari Sahib was a conversationalist par-excellence.  Many of the Left oriented intellectuals and comrades like Jatinder Pannu, Sital Singh Sangha, Raghbir Kaur, Gurmeet Singh, among others have paid glowing tributes to him remembering and recognizing his affiliation and leaning towards the leftist ideology. He was actively associated with the Desh Bhagat Yadgar Committee. The well groomed sons, Mohit and Chetan have paid wholesome homage to their worthy father, a difficult task to say something about a larger than life personality in the upbringing of his children.  Dr. Jagdish Chander Joshi wrote about the fellow alumnus of D.A.V. College Jalandhar and said that Dr. Virainder Tiwari enjoyed a rare distinction of a student, a teacher and a Principal of D.A.V College at one stretch of his illustrious career. Hats off to this self made man of Jalandhar.  Much more could be said about Prof. Tiwari. Though some of the ‘Speaking Dictionaries” have narrated a few anecdotes yet it would have been better if some more space would have been provided to this aspect for the advantage and benefit of the younger lot.

Father Mere Puttran De:- In this part, Savita Tiwar, the gracious wife of Prof. V.K. Tiwari, has given a graphic account of the last ten days, October 1 -10, 2016, of Tiwari Sahib and also the cherished memories of their marriage in June, 1980 followed by chronologically arranged memoirs, both sweet and sour, of their social and professional lives. The narration is informal without any academic or literary pretence which make it readable at leisure. Otherwise hale and hearty, Tiwari Sahib’s sudden death reminded me of the death of my young nephew Brijesh of 28, my brother’s son, in November, 2015 under the same circumstances – Home - Patel Hospital- DMC Ludhiana- Home – in a matter of a few days with the same deadly ailment “Dengue Shock Syndrome”. Saritaji’s story telling skills as an artist of standing is evident from her narration of her Navaratra fasts and the couple’s usual tiffs on small matters which we all face in everyday life. One can feel that Kukku and Sarita were made for each other. Tiwari Sahib belonged to an Arya Samaji family by birth and by education and experience he developed a Leftist leaning. Defying the tradition, he decided to marry Sarita without dowry and much fanfare. Sarita has stated, in a lighter vein, that on the marriage reception ‘there were more of speeches than dance and song’.

The author has succeeded in bringing out clearly that Prof. V.K. Tiwari was a man of sterling worth as described in the book “Teacher, Researcher, Linguist, Academic leader”. Apart from his profession as a teacher and educational administrator, Tiwari Sahib was a union leader for the rights of the academic fraternity. He served as General Secretary of the World Federation of Teachers’ Union. He was actively engaged with All India Federation of University and College Teachers Organisations (AIFUCTO) and as such very popular among the teaching community.  He was an international activists and travelled abroad intensively with regard to his union activities and also of the World Peace Movement etc. Tiwari Sahib believed in a little modified version of the dictum ‘Do or Die’, as stated by the author. He believed in ‘Do it before you die’.
कुछ उलझने हैं राहों में; कुछ कोशिशें बेहिसाब;
बस इसी का नाम है जिंदगी; चलते रहिए जनाब !

Condolence Messages: - The third part of the book is a compilation of condolence messages from cross sections of the academic and intellectual circles of not only Jalandhar but also Punjab and beyond. By reading these messages, one can feel the emotions of pain and sympathy people felt and expressed on the untimely demise of Prof. V.K. Tiwari and the bereaved family.  Dr. S.S. Bains of Lyallpur Khalsa College has rightly quoted someone, “The most beautiful good-byes are the ones that are never said and never explained.”

Tributes:- The concluding part of Father Mere Puttran De is the Tributes paid to Tiwari Sahib by his friends and associates in a vernacular daily with leftist affiliation, Nawan Zamana and some journals of the trade union outfits. Prof. Virainder Kumar Tiwari was a multifaceted personality and a leader by his right. My brother Paramjit had been his student at D.A.V. College in the late 1970s. He speaks very high of Prof. Tiwari. Paramjit told me that Prof. Tiwari was not only a competent teacher of English language but also great source of strength to the young students in extra-curricular activities. His informal and humble mannerism was very impressive and motivative.

Punj Aab Parkashan has done a good job in presenting the book with an excellent cover and professionally set contents. The book is readable and that too gratis at one go as the price of the book is “Your precious time out of your busy schedule to read this book” as graciously offered by the author and publishers.