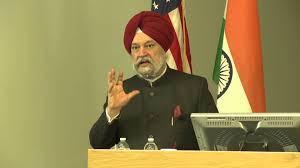 Modi. Puri Sahib is the right choice. IFS and we in the fraternity stand taller with this honour conferred on one of our senior colleagues. It is not the first time that IFS has contributed to the national politics and governance. K.R. Narayananan adored the Rashrapati Bhawan as President of India. M.H. Ansari aptly handled the position of Vice President of India. Kunwar Natwar Singh manned the coveted Ministries including the MEA with élan. Mani Shankar Aiyar remained a vocal Minister in PM Rajiv Gandhi’s government. Meira Kumar not only remained Minister but also occupied the coveted position of the Speaker of
Lok Sabha. Romesh Bhandari remained in the thickness as Governor of UP and also as Lt. Governor of Delhi. P.N. Haksar, besides working as Principal Secretary to PM Indira Gandhi, worked as Deputy Chairman of Planning Commission. N.N. Jha became Lt. Governor of Pondicherry. Mohammad Yunus delivered
as Special Envoy of PM Indira Gandhi many a times. Syed Shahabuddin served as an active Member of Parliament and one of the most articulate politians concerned about issues pertaining to minorities.  Brajesh Misra, J.N. Dixit, Shiv Shanker Menon contributed their might to the security of India as NSA in the governments of PM Atal Bihari Vajpayee and PM Manmohan Singh with Ministerial status. These sons of India, if I have not missed any name inadvertently, belonged to the IFS, a coveted civil service of India. I am confident that Hardeep Singh Puri will not be the last in the process. It is a matter of satisfaction.

Hardeep Singh Puri’s father Bhagat Singh Puri was also a diplomat. I have had the pleasure of knowing him in my initial years of service in the early 1970s. He was a dignified and cool officer fully justifying his name “Bhagat”, a thorough gentleman. It is a compliment. Later, I got the chance to work and interact with Hardeep Puri and his diplomat wife Lakshmi Puri in Sri Lanka in the difficult years from 1986-89. They were stationed in Colombo and I was posted in Kandy.  Both of them were always kind and available for any help and advice in the discharge of our duties. We all know that Hardeep Puri is one of the finest diplomats of India. He is a go-getter with quiet dignity. I always felt that Hardeep Puri had a special corner in his heart for the juniors and not well connected members of staff, perhaps, owing to his family background and connect with the IFS.

Visit to Rashtrapati Bhawan – I visited Rashtrapati Bhawan along with a delegation of Forum of Scheduled Caste MPs and MLAs headed by its Chairman, Charanjit Singh Atwal on September 8, 2017, as a member of the advisory committee of the Forum, to meet and congratulate the newly elected President of 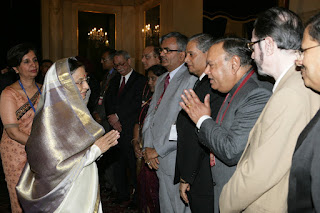 India, Ram Nath Kovind. It was a short and brief but a memorable joint encounter with the first citizen of India. The visit revived and recalled my earlier several official visits to the seat of the highest constitutional authority during my long diplomatic career. I last visited  Rashtrapati Bhawan in August 2010 to meet President Pratibha Patil in the official programme of the HOMs Conference arranged by the Ministry of External Affairs.

President Ram Nath Kovind entered the meeting room with quiet dignity where we were all seated. Charanjit Singh Atwal and MOS Arjun Meghwal received him at the entrance and presented him a bouquet of flowers. Charanjit Singh Atwal made his crisp remarks to congratulate and wish the President all success in his coveted position. President Ram Nath Kovind responded with his usual 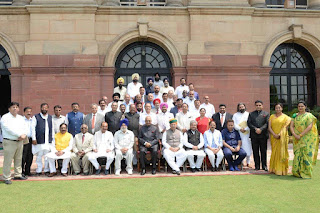 calm and cool style and thanked the delegation. Invoking Babasaheb Ambedkar, he said that we all must learn and follow the visionary leader in addressing many of the issues of concern and interest to the nation for our further progress. Charanjit Singh Atwal handed over a Memorandum on behalf of the Forum to the President in which my proposal to declare April 14, birthday of Babasaheb Ambedkar, as the International Day of Equality was included. President Ram Nath Kovind exchanged pleasantries with us and left after a group photo with the delegation. I must acknowledge the involvement and behind the scene work being done by Inder Iqbal Singh Atwal, the scion of Charanjit Singh Atwal for the functioning of the Forum of Schedule Caste MPs and MLAs. I am told that the grouping of Schedule Caste MPs was first initiated in the early 1950s by Babasaheb Ambedkar and since then it has been existing with some modifications conforming the current requirements. Hot and crisp snacks like samosas, pakoras and pastries from the traditional kitchen of the Rashtrapati Bhawan revived my memories. Incidentally, the GHO Hostess Anita, who was earlier working at Hyderabad House, was present to look after the hospitality. Since, I also worked for sometime in the Government Hospitality Organisation (GHO) of the MEA and later used to visit Hyderabad House frequently during the course of my duties, Anita happened to know me. She extended all courtesies.

President Ram Nath Kovind’s gracious spouse Savita is a family friend of my sister Kamla of Delhi. They were colleagues of about 40 years standing in MTNL. Savita Behenji along with their daughter came to Jalandhar in December, 2001 for the marriage of our daughter Vaishali. Later Ram Nath Kovind visited my brothers 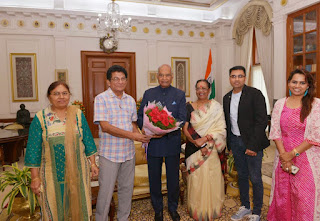 in Jalandhar in 2006-07 as the President of the Dalit Morcha of the BJP to prepare for the visit of Lal Krishan Advani to Bootan Mandi, our native place. Kamla and her family visited their friend Savita Behen and her family at the Rashtrapati Bhawan the following day i.e. September 9 and met President Sahib too. Kamla and my brother-in-law D.C. Kumar asked me to join them to meet the first family of India but I could not avail of the opportunity to meet President Ram Nath Kovind in a more relaxed and personal setting as I traveled back to Jalandhar with my interlocutors and hosts at the Punjab Bhawan in Delhi, Inder Iqbal Singh Atwal and Rajesh Bagha, Chairman of SC Commission of Punjab.

Without Comments:-
Quote
Ten sewer workers in Delhi have died in a little over a month owing to exposure to toxic gases in sewers they were cleaning. Death of workers in sewers is not new. It was reported from Mumbai and Bengaluru earlier this year.
Unquote
A feature in the Hindustan Times of September 17, 2017 “Raising Stink”