Ahisas – a collection of Punjabi Ghazals of Roop Sidhu

Ahisas – a collection of Punjabi Ghazals of Roop Sidhu

Roop Sidhu’s maiden literary venture – Ahisas, a collection of Punjabi ghazals was released on August 16, 2017 at Desh Bhagat Yadgar Hall in Jalandhar at a solemn function. The function was attended by the who’s who of the Punjabi literary elite located in and around Jalandhar. Though I stand nowhere in this galaxy of literary personalities yet Roop Sidhu was kind enough not only to invite me to the function but also made me sit on the high-table
with prominent intellectuals namely Hardial Sagar, S. Naseem, Sital Singh Sangha and Jagdish Kaur Wadia. The book release event was ably and aptly conducted by Prof. Gopal Singh Bhuttar, President of Sahit Kala Kender, as the Master of Ceremonies. It 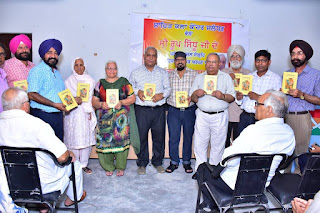 was indeed a pleasure to be there. Yet another gratifying factor was that the event was transformed to an impromptu Kavi Darbar. Not only the high flown names mentioned above participated in the Darbar but many more, inter alia, Narinder Pal Singh, Manohar Khaira, Des Raj Kali, Madam Sagar, came forward to recite their poems to further add to the value of the function.

I have gone through the book – Ahisas as a layman. I do not know the fine nuances of poetry. But I enjoy good poetry. Roop Sidhu’s excellent contribution fits the bill with 110 ghazals in the book. I have been reading Sidhu Sahib’s poems and ghazals, off hand, on Facebook and enjoyed myself. In the process, I suggested to him to come out with a book for wider appreciation which he did and did it with aplomb. It is a matter of great satisfaction. I have observed that Roop Sidhu is a poet of life, life in its all shades. The ghazals 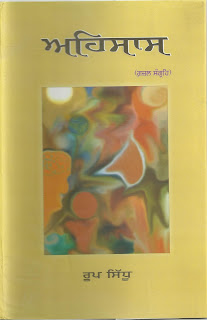 in the book represent normal and common attributes of a human personality such as fear, faith, love, harmony, friendship, complaint, appreciation, elation on one hand and the travails of a poor and under-privileged in the rural backyard on the other. Roop Sidhu is fully aware of the prevailing social and political scenario of the country and the society at large.

Roop Sidhu has candidly admitted in one of his compositions that he has full realization – Ahisas – that his ghazal would naturally find a mention of spades and sickles, the tools of a poor farm labourer:-

While making a mention of the functioning of our parliament, the author says:

An advice to exercise control on unbridled speech is timely:

Humility is a family trait with Roop Sidhu. I can say this safely after meeting his family. One of the ghazals in the book amply demonstrates this much needed attribute:

These were some of the examples to appreciate Roop Sidhu’s meaningful and thought provoking ghazals which would ultimately be availed of as food for thought by the connoisseur of good poetry.
Roop Sidhu has dedicated the book to his mother Smt. Swaran Kaur and rightly so. She witnessed the release of the book of his worthy son from the high table and was visibly moved when Sidhu Sahib rendered one of the couplets as a word of gratitude to the mother. Hardial Sagar, a renowned poet and ghazalkar himself, sitting by my side, instantly commented that this ‘Sher’ will remain as a much acclaimed Sher in the years to come.

ਕਾਸ਼ ਰੱਖ ਕੇ ਅਕਾਸ਼ ਨੂੰ ਖੜਮਾਂ;
ਉਸ ਵਿਚ ਤਸਵੀਰ ਮਾਂ ਦੀ ਜੜ ਲੈਂਦੇ !
The foreword of the book has been written by no other than the literary guru of Roop Sidhu, Amrik Ghafil who taught Sidhu Sahib the nuances of poetry and ghazal and turned a raw talent into an expert handler of the sophisticated art of penning excellent poetry. Sidhu Sahib and Ghafil Sahib met in Dubai where they both went for greener pastures. They not only registered success in respective professions but also created good social and community life for themselves. Amrik Ghafil is a recognized poet by his own right. He recited his own poetry at the function which touched the audience.  He quotes Sidhu Sahib to pay rich tributes his style and matter and involves “Ahisas”:

Commenting on the egalitarian outlook of Roop Sidhu, his literary mentor quotes him: 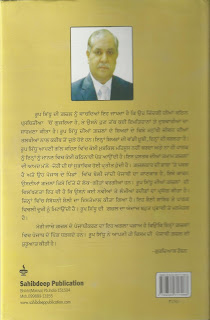 Roop Sidhu and I came to know each other from our common interest and concern in some of the community matters pertaining to the weaker sections of the society particularly dalits. He is a knowledgeable man with all positive traits to contribute to the social well being of the community and the society at large. I take this opportunity to congratulate my friend Roop Sidhu and wish him all the best in the years to come.