Pay Back to Society – Lofty Ideal of SPEED & RELIT

Pay Back to Society – Lofty Ideal of SPEED & RELIT 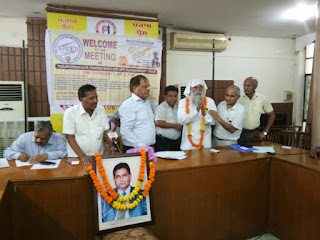 privileged communities of the society at large on June 10, 2017 at Punjab Press Club in Jalandhar.  The meeting was well attended by participants not only from Punjab but also from other states namely, inter alia, Maharashtra, Andhra, Telengana, UP, Rajasthan, Delhi, Haryana, HP, J&K, Chandigarh.  The agenda for discussion at the meeting was a broad based one with important themes of interest and concern to dalits and other weaker segments of the society.

The meeting was conducted very ably by a retired IRS officer, Joginder Pal who is the Chief Administrator of RELIT. The speakers spoke with conviction and a sense of concern particularly on the current situation on account of the recent atrocities and highhandedness of the upper castes on dalits in Saharanpur and the issue of disunity and self contradictions among dalits. Advocate Nathi Ram from Saharanpur briefed about the ground situation in and around Saharanpur and termed the situation as tense. He informed, without mincing words, that Bhim Army tried to save and help the hapless dalits from the willful highhandedness and muscle power of the upper castes but was not able to avoid and ward off unfortunate loss of life and property of dalits. The administration and social set up was determined to undermine the interests of dalits. He candidly said that we, referring to Bhim Army, should organize and train ourselves better before challenging the all powerful oppressors. A senior police officer Shammi Kumar of Jalandhar expressed his regret that dalit officers themselves were instrumental in spoiling his chequered career - what to speak of others? He was of the view that dalit officers who try to hide their identity while enjoying the privileges should be exposed to shame them. Ashok Basotra from J&K was of the view that the salvation of dalits lied in Dr. Ambedkar and his teachings. There was no other way. He ardently pleaded that all dalits must embrace Buddhism to kill the tyranny of caste system. Chetan Bairwa of Faridabad and Bhanu Partap Singh of Ghaziabad, Senior Advocates at the Supreme Court at Delhi underlined the dangers of the up-coming social scenario in wake of rising tensions in the society particularly with regard to dalit communities. They pleaded for political consolidation to safeguard the dalit interests. Dr. Mohan Rao from Telangana was of the view that there was an urgent need to get united to face the challenges of the future. Col.   Raj Kumar of Chandigarh also spoke and urged the dalit intelligentsia to come forward and take the lead to guide the community to empowerment. I made a short presentation on power-point formation on the theme “Suggestions to address divisive tendencies among dalits” and said that the Poona Pact of 1932 signed by Mahatma Gandhi and Dr. 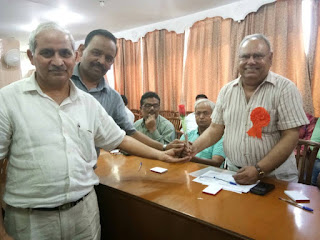 B.R. Ambedkar was a classic fraud and blackmail done by Mahatma Gandhi to cheat and condemn dalits to their traditional oppression at the hands of Manuwadis.  The key-note speaker Sukhdev Baghmare from Pune spoke at length and said that though he disliked the word dalits yet he would urge them to get united under one identity as Ravidassias while retaining our sub-identities as Valmikis, Buddhists, Kabirpanthis and so on. He advised that we all must do something positive to ‘pay back to society’ either in political field or in social or even spiritual depending on one’s interest and capacity. Dr. R.L. Jassi, IPS (Retired) summed up the deliberations at the meeting and said that dalits were basically peace loving and law abiding people as the followers of their leader Babasaheb Ambedkar but, referring to the new outfit Bhim Sena, there was an ample justification to have both “Narm and Garm” streams go together to achieve their bonafide goals as it was done in the Indian freedom struggle. Janak Raj Chauhan of the SPEED gave the vote of thanks to conclude the meet.

All said and done, two things came out clearly in these deliberations. One, there was an urgent and immediate need to unite and consolidate dalits to ward off the Manuwadi onslaughts amidst, the unfortunate but obvious, rising social tensions. These tensions are bound to increase in the coming days and dalits should get prepared to meet the situation. Second, the desirability and feasibility of outfits like Bhim Sena and others was a big question which should be studied and answers found before it gets late. Some people, may be rightly so, were of the view that dalits were still not ready or empowered to meet the challenge with violent means as the oppressors were too powerful. The refrain was that dalits should first get educated as advised by Babasaheb Ambedkar and slowly graduate to agitation and organization to meet the upcoming scenario. Yet another factor which torpedoes the much needed unity among dalits - growing animosity among the neo-Buddhists and the Ravidassias, came to surface. One can understand the concerns of both the sides but still in the larger interests of the community at large, every effort should be made to reconcile the view points as we all can unite and take shelter under the umbrella of our common icon Dr. Ambedkar.

The proposal of declaring April 14, birthday of Dr. B.R. Ambedkar, as International Day of Equality found a special mention and was resolved by the meeting, on endorsement by IRS Joginder Pal and IPS Dr. R.L. Jassi, to support the proposal and urge PM Narendra Modi and EAM Sushma Swaraj to make a demarche to UN in this regard.

Posted by ramesh chander at 8:04 AM