My friend, Sohan Sehjal, a known poet and writer of Punjabi, was kind enough to send me a newly published book in Punjabi “Mera Jiwan Pandh” – a biographic narration of a renowned Punjabi poet and community activist, Gurdass Ram Alam (1912-1989). The book is a compilation of articles written by Gurdass Ram Alam in a Punjabi newspaper Jantak Lehar which have been edited and 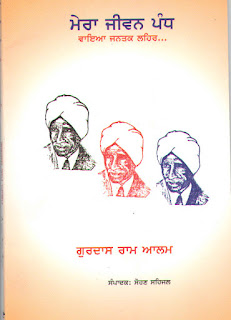 published by Sohan Sehjal. It is an appreciable and thoughtful tribute to the memory of a great poet and a natural spokesperson of the poor and the marginalized sections of the society. I have read the book with interest and pleasure as a fan of Gurdass Ram Alam, a rustic but down to earth humanist. I posses his three books of poetry – Je mein Mar Gya, Alle Phatt and Urdian Dhuran. These books were well acclaimed not only in the literary circles of Punjab but also in the intellectual, social and political circles as Gurdass Ram Alam in these books gave a new and easy meaning to the intricate communistic theories of Karl Marx and thought provoking ideas and thinking of social and economic equality of Dr. B.R. Ambedkar.  For example:

Sudesh Kalyan, a worthy daughter of Gurdass Ram Alam, who has recently retired from a coveted position from Doordarshan Jalandhar, has written the foreword of the biographic account of her father. She has given a peep into the personality of Gurdass Ram Alam by saying that Alam was a simple and truthful and also a loud mouth (Munphat) person who has the inclination to tell the truth and hear the truth – Sach Kehan Di Meri Adat Hai; Mein Val Pake Gal Kahenda Nahin.
The book is a compilation of a series of 18 articles written by Gurdass Ram Alam in his rustic Punjabi style in the newspaper Jantak Lehar in 1988 before his death in 1989. It makes a pleasant and interesting reading on side and also informative of the hitherto unknown facts of dalit politics and Ad-dharam movement in the 1930-40s on the other. The veracity of the information cannot be doubted as it came from the horse’s mouth. Gurdass Ram Alam himself was actively engaged and totally involved in the process.
Gurdass Ram Alam, a poor dalit belonging to the marginalized segment of the society with rural background, was literally illiterate, if one goes by the so called formal education. While living a life of a poor manual labourer most of his formative years either in his village Bundala in Jalandhar or in Quetta/Baluchistan (now Pakistan), Alam rose to become an acclaimed poet and social activist of standing with inborn talent. His study and understanding of the intricate theories of communism and full knowledge of Indian history and traditions and also of social moorings appeared to be perfect. Alam, to my mind, was a God’s gift to the society. The Sikh literary circles in Quetta and later Chief Khalsa Diwan in Amritsar duly recognized Alam Sahib’s talent and gave him jobs with good remunerations to take care of his poor economic status.  But Gurdas Ram Alam was totally involved with the community to fight against the social and economic tyranny and exploitation. He could not stick to one place only because of money and literary laurels.  I personally have had the pleasure to meet and listen to him at Guru Ravidass Gurpurab celebrations at Bootan Mandi in Jalandhar in the late 1960s when I was the General Secretary of Guru Ravidass Youth Club. Gurdass Ram Alam, a simple man with a Khes (hand-spun cotton shawl) and  a ruffled white khadi kurta-pyjama, was an embodiment of humbleness. I vividly recall that Alam was much liked and was in demand by the huge audience at the congregations. He was not only a good thinker and writer but also apt at reciting poetry to the entire satisfaction of the mind and soul of his listeners. Recently, when I was posted as the Consul General of India in Scotland (2007-09), I came across many Indians in Glasgow, affiliated to Indian Workers Association in the UK, who were the fans of Gurdass Ram Alam. They heard him both in formal Mushairas and also in private Mehfils along with Shiv Kumar Batalvi. Everyone spoke very high of Alam Sahib. It was gratifying to note. Alam had had the opportunity to recite his famous poem (Majdoor) in the presence of Jawaharlal Nehru in Rawalpindi in mid 1930s. It was interesting to know that the Chief Khalsa Diwan terminated Alam Sahib’s contract to work with them because they did not like his classic poem “Acchut da Ilaj” which, according to their perception, tended to criticize Sikhs along with others. Alam Sahib recited his famous poem “Azadi” – Kyon Bhai Nihalia Azadi Nahin Dekhi – in the historic congregation at Bootan Mandi, Jalandhar in September, 1951 in the presence of Dr. B.R. Ambedkar.

The contents of Mera Jiwan Pandh written and serialized in a vernacular Punjabi paper Jantak Lehar are note worthy as they may not find any mention in other publications. First, Alam has mentioned many names associated with the Ad-dharam Mandal and Schedule Caste Federation which have not been heard otherwise. The role of caste Hindus in prompting dalit leaders like Prithvi Singh Azad, Sunder Singh, Jaswant Rai among other to become Arya Samajis and join Congress Party to oppose Ad-dharam Mandal of Babu Manguram Mugowalia and Dr. B.R. Ambedkar came out very clearly. Alam has surmised that later Manguram also joined the Congress Party as he was threatened to surrender his land, granted by the government for loyalty and services in the 2nd World War. Yet another, so far an obscure fact, came to light that as a counter-weight to the Congress Party stand on support in the World War, the British leadership encouraged and appeased  dalit leadership to support the war efforts. In addition to the Mazhabi regiment (later Sikh Light Infantry), Mahar and Chamar regiments were created. Chamar regiment was deployed in Burma and Kohima to stall the Japanese and INA forces. Later the Chamar regiment was disbanded. Alam has mentioned about another interesting point of history with regard to the Communal Award and Poona Pact of 1932. Mahatma Gandhi opposed the Communal Award. On one hand he tried to prompt dalit leaders to stand up against the Award and Dr. Ambedkar by offering more seats to dalits in joint electorate. One the other, addressing the opposition to more seats expressed by the caste Hindus, Gandhi pacified them by saying that if the separate electorate were given and introduced there will be 78 Ambedkars, referring to number of seats in Communal Award, and it will be difficult to face and control them. He willfully forced joint electorate for dalits so that candidates nominated and supported by the Congrss party and the caste Hindus only would make to the assemblies.

Gurdass Ram Alam was a true nationalist and a staunch socialist by conviction and conduct. Most of his poetry hovers around the ills of poverty and inequality. It may be vouched from the fact that he consciously named his four sons, who could not survive their infancy, as, Sahit (Literature) Sangeet (Music), Andolan (Movement) and Lokraj (Democracy). Some anecdotes from his simple life make interesting reading: Alam was a smoker. While working for the Chief Khalsa Diwan in Amritsar, he was paid for his cigarettes but shown as food stuff. One can imagine that at that time, even Sikhs were liberal. In pecuniary hardships, he even stealthily took some money from temples in garb of paying obeisance to purchase cigarettes for himself and his comrades.

Sohan Sehjal did a yeoman’s service to the society by editing and compiling the book. Alam requires further research and study by the students of dalit literature and social movements. Pritam Ramdasspuri, my fellow Bootan Mandian and a poet of standing paid glowing tributes to Alam on his death in 1989. The tribute has been included in the book under review.

Posted by ramesh chander at 9:37 AM