Mark Juergensmeyer, Professor of Sociology and Global Studies and Director of Orfalea Centre at University of California, is a renowned scholar and researcher of social and religious issues concerning a cross section of societies throughout the world. I had heard of him and also read about his pioneering works about the social and religious movements of dalits in Punjab. But I was not aware of the fact that Mark had a much larger and pronounced persona till I met him in Jalandhar on January 18, 2017 at the sprawling villa of my friend Manohar Lal Mahey. Thank you Manohar for introducing me and providing me chance to meet and 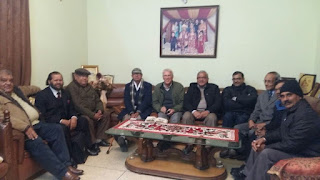 interact with Mark in an informal session on a chilly evening but thoughtfully taken care of with hot and spicy tomato soup and snacks. It was a pleasure to meet Mark along with others, inter alia, Lahori Ram Balley, Dr. Gian Kaul, Dr. Santokh Virdi, Baldev Bhardwaj and Prof. Singh who was accompanying Mark from Delhi to facilitate his Punjab visit. Like a good scholar, Mark Juergensmeyer speaks less and listens more. I was impressed by his personality and demeanor.

I had heard about Mark’s visit to my native place Bootan Mandi and other spots in and around Jalandhar in the early 1970s in pursuit of his pioneering research work – Religious Rebels of the Punjab: The Ad-dharam Challenge to Caste and its later edition The Social Vision of Untouchability. These books are not readily available now. I would like to read them at leisure as and when I happen to source them. My friend Manohar Mahey, Santokh Virdi and Lahori Ram Balley found mention in these books as the worthy author met and interacted with them in the making of these books. Obviously, they were happy and appreciative of Mark. But one of my other friends in Bootan Mandi who is also socially active and well read otherwise commented that the book of Mark under mention was ‘full of half truths’ as the source persons were not fully objective in their approach. Nevertheless, I must register recognition of a wonderful contribution of Mark in generating much needed awareness of the contemporary history of dalits in Punjab.

As stated by Mark, the purpose of his current visit was to work on his latest project pertaining to the Khalistan, yet another important subject to Punjab and Punjabis at large. During the interaction, it transpired that Khalistan was a dead horse. I questioned the very genesis of Khalistan. The idea is kept, to my mind, alive by some vested interests in the well maintained and stocked drawing rooms in Europe, USA and other developed countries. Mark enquired about the future of Ad-dharam in Punjab and elsewhere? It was a relevant question in the fast changing political and social scenario. My off the cuff response was that there was no future of Ad-dharam and the newly floated Ravidassia Dharam by the Dera Sachkhand Balan. The Ad-dharam has lost its relevance and wherewithal. The Ravidassia Dharam is a half baked and ill conceived idea and is bound to fade away in the years to come. Perhaps,  researchers and historians like Mark will have food for thought and action in the process.
Anyway, it was nice to sit and talk with Mark Juergensmeyer. With a view to introduce Mark and his Indian connection , let me quote from a write up which I read recently, “ He lived in India from 1966 to 1967 where he taught political science at the Panjab University in Chandigarh and worked in famine relief in the Indian state of Bihar. He joined the Gandhian Sarvodaya Movement, working directly with its leader, Jayaprakash Narayan”
After meeting Mark Juergensmeyer, we became Facebook friends. I can follow him and interact with him. He is a committed scholar to work with difficult projects in challenging circumstances. His ongoing work on movements like ISIS, Kurdish etc. would be worth watching. I wish Mark all the best in the years to come.

Posted by ramesh chander at 3:53 PM