DR. Babasaheb Ambedkar’s 125th birth anniversary falls on April 14, 2015. The main political parties viz. BJP and Congress are fallingon each other to own the legacy of Dr. Ambedkar by celebrating and observing the anniversary in a big way. Whereas the traditional political outfits like RPI and BSP etc. who professed Dr. Ambedkar as their icon and mentor have lost or are increasingly losing their position in the changing political and social scenario in the country. The relevance and acceptance of Dr. Ambedkar is on the rise and rightly so. The likes of Arun Shourie, Mulayam Singh and some others must be sulking. That is why the heading of this piece is ”Qufar Toota Khuda Khuda Karke” – The tyrants who were not afraid of anybody are falling while remembering God (Khuda).

Throughout his life Dr. Ambedkar remained a principled opponent of Congress and Mahatma Gandhi on the one hand and orthodox Hinduism and Manuwad on the other. There was no love lost between Ambedkar and the likes of Hindu Mahasabha, RSS, Jan Sangh and other communal outfits like Muslim League etc. Towards the last years of his life, Dr. Ambedkar tried his bit to cobble around a union of secular and socialist forces, in cooperation with Ram Manohar Lohia, Jaya Prakash Narain and others to meet the challenges of development and progress of the infant Indian nation but that was not to be and he died prematurely in December, 1956. The likes of Mulayam Singh, Giriraj Singh and a few others with feudal mindsets may not understand this as of now. But the coming times belong to the mission and philosophy of Dr. Ambedkar. It is for sure. Dr. Ambedkar was a hard core nationalist. His thought emanated from the universal and humane dictum of “Bahujan Hitaye; Bahujan Sukhaye” of Buddhist philosophy. He said in one of his speeches, “My philosophy may be said to be enshrined in these three words: Liberty, Equality and Fraternity. These principles of my philosophy have its roots in the teachings of my master,  Lord Buddha.”  The lofty ideals of his thinking are well embodied and stipulated in the constitution of India in the form of Liberty, Equality, Fraternity, Justice, Harmony as the fundamentals of Indian polity and society. 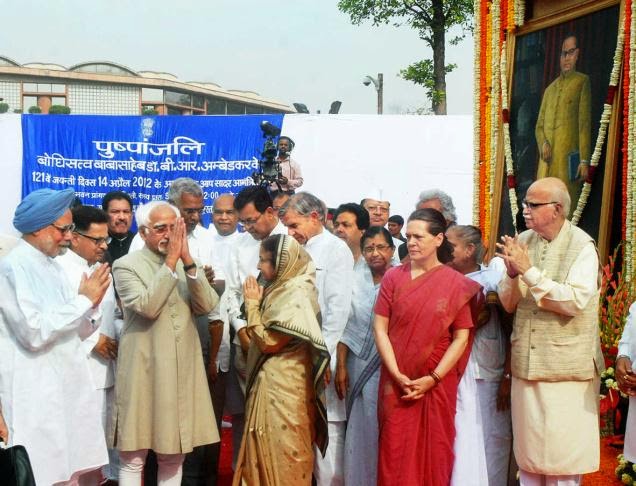 As we say in India ‘ Der Ayat Darust Ayat’, Congress Party, in the face of crushing defeat in electoral politics, has realized that their salvation lies with Ambedkar and his followers, particularly the dalits. The Congress Party has decided to observe the year 2015-16 as the 125th anniversary year of Babasaheb Ambedkar. They have constituted a high power committee headed by its President Sonia Gandhi for the purpose, as reported in the media.  The Convener of the Ambedkar Birthday Celebration Committee, K Raju said, “Our biggest challenge is to clear the misconceptions about Ambedkar and the Congress. His ideology has been projected as antagonistic to the Congress whereas it was a partnership between the two.” BJP and RSS have initiated a concerted plan to embrace the legacy of the dalit icon Dr. Ambedkar with a view to grab dalit votes. The RSS leadership is all geared up to join hands with the Narendra Modi Government to unleash the agenda to own Dr. Ambedkar on April 14, the 125th birth anniversary of the great leader. It has been reported in the media that PM Narendra Modi will inaugurate a Rs. 200 crore project of a research centre and a library in Delhi dedicated to the life and message of Babasaheb Ambedkar. The RSS mouthpieces the Panchjanya and the Organiser are coming out with special issues on the anniversary of Dr. Ambedkar. BJP has directed its party machinery to organize functions to celebrate the occasion at each block throughout the country. Paying glowing tributes to the leader, RSS Prachaar Parmukh Manmohan Vaidya said, “Ambedkar is a national leader not just of a particular group. The complete Ambedkar needs to be brought to the people and efforts will continue to be made in that direction.” RSS is in the process of re-writing history to woo dalits. One of the dalit BJP leaders Vijay Sonkar Shastri has recently written three books on Chamars, Khatiks and Valmiki denominations (Jatis) which were released by the RSS Chief Mohan Bhagwat. In the Foreword of these books, the RSS leadership claimed that these castes had come into existence due to atrocities by foreign invaders and did not exist in Hindu religion earlier. The war has just begun. Let us see how things happen. Let us also hope that these onslaughts do not remain merely political rhetoric to garner votes. It will do no justice either to the country or Dr. B.R. Ambedkar. I conclude with an apt poetic expression of Allama Iqbal: