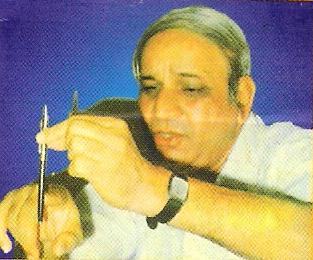 Today, October 9, is the death anniversary of Babu Kanshi Ram (March 1934-October 2006) who was also addressed with respect as “Manyawar” by his followers and rightly so. Babu Kanshi Ram was a great leader of the dalits and other backward and weaker sections of the society after Dr. B.R. Ambedkar. He carried forward the Mission of Joytiba Phule and Ambedkar with great zeal and resultant success. In fact, to my mind, it was Kanshi Ram who could generate and provide a mass base for the dalit movement and aspirations in the contemporary India. He succeeded in encouraging and motivating the dalit youth to stand up and ask for their rightful space and position in the political, economic and social establishments of the polity, economy and society of the country.  He fought for total transformation as against the status quo of the political and social forces at the helm of the affairs. Babu Kanshi Ran in one of his interviews to the media in the early years of his political career said” To my mind, all parties represent the forces of status quo. For us, politics is the politics of transformation. The existing parties are the reason for the status quo. That is why there has been no upward mobility for the backward communities”.


In the early years of his life, Babu Kanshi Ram was a scientist working with a Government scientific laboratory in Kirkee.  Some routine cases of upper-caste high handedness cajoled the sensitive mind of Kanshi Ram. He studied Ambedkar’s writings and embarked upon a mission for the empowerment of the dalits and other backward classes as equal partners in the political and economic structures of the country.  Kanshi Ram launched his first organization called BAMCEF (Backward (SC, ST, OBC) and Minority Communities' Employees' Federation) on December 6, 1978:  Three years later, on December 6 1981, he founded another organization called DS-4 (Dalit Shoshit Samaj Sangharsh Samiti) and on April 14, 1984, i Kanshi Ram finally formed a political party named Bahujan Samaj Party. Babu Kanshi Ram was a visionary. He was an astute political strategist and a communicator par excellence.


Kanshi Ram disapproved the current dalit leadership and termed them as Chamchas created by the Poona Pact of 1932 signed between Mahtma Gandhi and Dr. Ambedkar. He criticized the Poona Pact as it took away separate electorates offered in the communal award of PM Ramsey MacDonald which, according to Kanshi Ram, was a political blunder and tactful defeat of dalits by the Manuwadi forces.


Kanshi Ram’s political vision and his success are clearly visible in the emerging India. BSP is one of the leading political parties of the country. His follower Kumari Maywati occupied the coveted position of the Chief Minister of UP for four terms. The party has an impressive strength in the Parliament and the UP Legislature. BSP is a political force to be reckoned with.  Dalits are getting assertive for their rights and dues. It is all due to the relentless struggle of Babu Kanshi Ram. The contours of the Indian political and social order are changing. I am reminded of Kanshi Ram’s thinking when he said “I tell my followers Ek Eet Ka Jawab, Do Pathron Se (you must retaliate for one brick with two stones), otherwise you are not my followers”.
Posted by ramesh chander at 6:48 AM