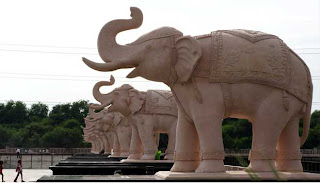 Rashtriya Dalit Prerna Sthal ( National Dalit Inspiration Complex) built by the Government of UP at the Delhi – UP border on the banks of the Jamuna river in the district Gautam Buddha Nagar (NOIDA) is being dedicated to the people today the October 14 (the day Dr. Ambedkar embraced Buddhism in 1956), 2011

by Kumari Mayawati, Chief Minister of UP. It has been reported that the Sthal will be an important landmark in the National Capital Region of Delhi, built at a considerable cost of Rs.700 crores, not only for the empowerment of the dalits but also serve as a green space from the ecological needs of the area which is otherwise polluted.

The Rashtriya Dalit Prerna sthal is located on the eastern bank of the river Jamuna. It is only befitting to have a deserving memorial and monument for the dalit leadership at this venue as they could not get any slot (except Samta Sthal dedicated to Babu Jagjivan Ram) on the other side at the west bank of the river where all other important memorials of Mahatma Gandhi, Pandit Jawaharlal Nehru, Indira Gandhi, Rajiv Gandhi, Charan Singh and others have been hosted by the Government of India. Kumari Mayawati has done a good job in this regard. There is some ill-conceived criticism of the money spent by the UP Government on the Sthal. But the criticism is biased. It is time to understand the underlying current in the society at large. The oppressed and depressed must find their space and voice in the democratic India. The sooner the better.
Rashtriya Dalit Prerna Sthal at the gateway of NOIDA, an important and upcoming hub of economic and educational establishments just at the door steps of the capital of India, Delhi would tend to send a strong positive signal not only to the younger generations of India about the role and place of dalits in the society but also serve as a touristic spot for the national and international tourists. The expenditure on building such an important attraction may be justified, keeping the benefits of dalit chetna and inspiration on one side and ecological and touristic on the other. It would serve as one big step towards the much needed social transformation.
Posted by ramesh chander at 10:16 AM