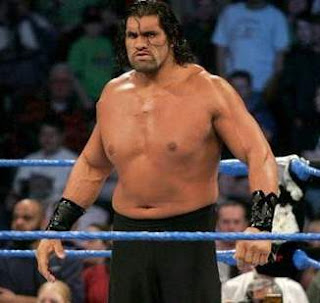 The Great Khali, the king of wrestling, is also known as Giant Singh. His real name is Dalip Singh (August 1972) son of Shri Jwala Ram of village Dhirana in Himachal Pradesh. The Great Khali belongs to a poor dalit family. He could not afford to have formal schooling. He had to work as a daily wager as a stone broker on road construction projects to support his family. I have learnt from the media that he is a follower of Guru Ravidass, the champion of work, worship and brotherhood. The great Guru's teachings (वाणी ) says ' नीचों उच्च करे मेरा गोबिंद ' and khali rose and became a phenomenon in the world of wrestling, breaking all warriers. He was picked up by a senior officer of the Punjab Police and recruited him in the police. Khali's determination, hard work and his god fearing up-bringing in utter poverty motivated him to scale greater heights in his pursuits to be a sports person par excellence. Khali was a player of repute of Heavy Weight Lifting and Basketball and won the titles of 'Mr. India' for two successive terms before registering himself at the World Wrestling Entertainment (WWE) in the USA. He was the first Indian professional wrestler to do so. Khali has also acted in a couple of Hollywood and Bollywood movies.

With his professional success as a world class wrestler, khali remains a humble family man. He tries help the poor and needy at his native and other places. His wife Harminder Kaur daughter of Shri Banta Ram Kainth of Jalandhar confirms that khali is a normal human being with a soft heart, inspite of rumours to the contrary. I myself saw him recently on the India TV programme 'Aap Ki Adalat- आप की अदालत ' hosted by Shri Rajat Sharma. Rajat Sharma, commenting on the performance of khali said that he was not sure before the shooting of the show whether Khali would be able to withstand the grilling at the Adalat but to his entire satisfaction Khali came out nicely with confidence and earthy sense of a worthy son of the soil.

The young generation of India and Punjab particularly of the dalits and poor segments of the society should learn from the life and struggle of Khali (Dalip Singh Rana) and emulate him in their own pursuits to achieve their goals.