Some years ago, Dalit business enthusiasts of Punjab with the support and encouragement of RSS, launched a facilitating and advisory outfit named - Scheduled Caste Entrepreneur Empowerment Forum - SCEEF with a motive to initiate SC entrepreneurs to start their own businesses rather than hankering after jobs. The idea was to make them aware of the government plans and schemes to provide finances and necessary technical back up to help dalit business men to start their own businesses both in manufacturing and trading. It was thought that SCEEF would interact with the governmental agencies like NSIC, SC Hub, MSME, various export promotion agencies, agencies dealing with 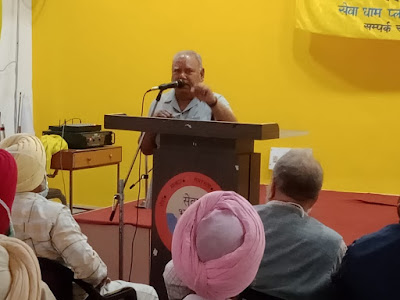 government procurement among others and facilitate 'Start Ups' initiated by SCs. SCEEF, it was a matter of satisfaction, did some good work to begin with but soon developed some lethargy and lost direction. I am was one of the founders of SCEEF and later worked with them as Advisor/Patron. Rajesh Bagha, Former Chairman of Punjab SC Commission and BJP leader, Social Activist Jiwan Singh of LIC, RSS Activists Dr. Varinder Garg and Banbeer Singh among others were instrumental in the exercise to establish SCEEF. I am not formally affiliated either with RSS or BJP. But I try to be open minded to associate and work with anyone for the empowerment of the weaker sections of the society particularly of the dalit communities. Sometimes some of my friends suspect my motivation in this regard but I take this in stride. In the process, of late, I mentioned to Rajesh Bagha that we should energize SCEEF for the benefit of our SC brethren as it would also serve their political agenda by engaging with the SC communities. Their bosses in the BJP and RSS, I think, are not oblivious of the fact that apolitical people like me are sure to face stiff opposition and criticism in dalit communities owing to historical reasons and ground realities. But as one who believes in ‘Samrasta’ and cohesiveness in the society, I volunteer to accept the challenge in the larger interests of the community and the society at large.

With this background, Rajesh Bagha and his associates arranged a meeting of SCEEF at Seva Dham in Chandigarh on March 18 and invited me to the meeting. I was reluctant to accept the invitation but Rajesh was keen to see me there and I relented. One of the participants in the meeting from Amritsar, Dr. Jatinder Kumar and his associate Sameer Pandit picked me up on the way from Jalandhar for the meeting in Chandigarh. It was a well attended meeting by about 100 participants from all over Punjab. The exercise turned out 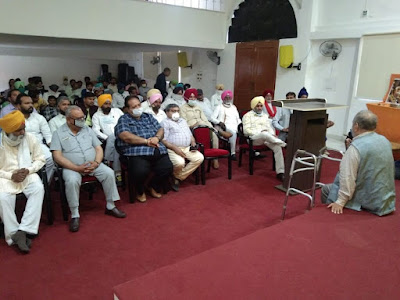 to be a good attempt to catch up with the situation and revive the business and economic aspects of the SCEEF with the underlying current of political and social ambitions of Rajesh Bagha and others like Former Chief Parliamentary Secretary Avinash Chander, Paramjit Singh Kainth of National SCs Alliance, Rohit Sonkar of Dalit Helpline, Jai Singh Phillore , inter alia. RSS Activist and OSD to Union Minister of Health, Dr. Varinder Garg, based in Chandigarh, also participated in the meeting.

Rajesh Bagha set the ball in motion by his opening remarks underlying the need to activate the SCEEF and address the issue of Post-Matric Scholarship to SC students. Paramjit Kainth spoke about their struggle for the release of held up degrees and scholarships of SC students and asserted that SCs should stand up and fight for their due space in the administrative and governance structures. He also added that we should not shy away from RSS, if they were doing something good for the marginalized segments of the society. Avinash Chander spoke with conviction and focused on the need to attract our youth to join businesses. He fully supported SCEEF’s agenda to facilitate sourcing of much needed finances from different government agencies under existing plans. He referred to Guru Ravidass Temple at Tughlakabad in Delhi and demanded BJP and RSS should see to it that a grand temple was built at the historic site to assuage the ruffled feelings of dalit communities. Social Activist Jai Singh Phillaur felt that it was utmost necessary to do our best to bring about cohesiveness in the society by economic and social integration. Dr. Varinder Garg in his brief intervention said that it was time to realize the mission of Guru Ravidass and Babasahib Ambedkar by empowering the weaker sections of the society. Some of the speakers appreciated the BJP mind to make a dalit CM of Punjab, with almost 40% dalit population, as no other party did it so far. I was asked to close the meeting by summing up the proceedings. I underlined the importance of economic wellbeing alongside the social empowerment of the community and appreciated the endeavors of SCEEF in this regard. As regards the scholarship issue, I suggested that the blame game between the governments and the colleges for timely release of money may be ended by some sort of arrangements like ESCROw account for timely payments. I also referred to the CM’s position in Punjab and added that nobody could make anybody CM. It has to be earned and grabbed by own one’s own strength. We must learn from the saga of Babu Jagjivan Ram. There would, always, be many “Charan Singhs” sitting in the wings to disturb the applecart. Referring to the role and importance of RSS as one of the biggest organizations of the world in bringing about ‘Samrasta”in the society, I urged the bosses in the RSS to ensure that much needed visibility in their actions and involvement with the matters of empowerment of dalits was introduced to engage with the community to address their fears, doubts and concerns and particularly mentioned the two issues on which positive action would send a right message as a ‘symbolic value’ – i) Guru Ravidass Temple at Tughlakabad in Delhi which was earlier referred to by Avinash Chander and ii) the proposal on April 14, birth anniversary of Babasaheb Ambedkar, to be declared as International Day of Equality which is resting with the Ministry of External Affairs of India since June, 2015. Concluding the remarks, I added that the catchword for success of dalit communities rested with the dictum: “United we stand and Divided we fall”

Posted by ramesh chander at 5:06 AM