Dr. Kulwant Singh Phull, Principal of a prestigious educational institution in the Doaba region of Punjab, Guru Nanak Prem Karamsar College at Nadala (Kapurthala), very thoughtfully invited me to visit them and speak to their students on the topical issue of national importance – Abrogation of Article 370 and its Implications – on November 2, 2019. I accepted the invitation and have had a 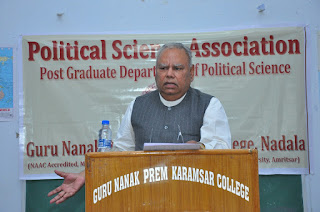 rewarding opportunity to speak to the students of Political Science of the higher classes and interested faculty members of the college on the given subject. The Talk was arranged by the Political Science Department of the College ably stewarded by Prof. Jagbir Singh as its HOD and was nicely conducted by yet another budding teacher, Prof Daljit Kaur. It may not be out of place to mention that, incidentally, our interlocutor to introduce me to Principal Phull was no other than a recognized and dedicated teacher, my brother-in-law (husband of my sister Lakshmi), Prof. Balbir Chander who retired recently as HOD of the esteemed Doaba College Jalandhar. He also accompanied me to the Nadala College as the Guest of Honour. And rightly so, apart from his academic association with Dr. Kulwant Singh Phull, both Prof. Jagbir Singh and Prof. Daljit Kaur and yet another faculty member of the College, Prof. Amanpreet Kaur, studied Political Science from Prof. Balbir Chander at Doaba College. They were all the more delighted to meet and host their worthy Guru, Balbir. It was a pleasure for me to sit and watch their delightful interaction. It was a matter of satisfaction that the audience was reverential and interested in listening to us in a much relaxed atmosphere. I was happy to know that Guru Nanak Prem Karamsar College was established fifty years ago, now in its Golden Jubliee year, on the auspicious occasion of the 500th Guru Purab of Guru Nanak Devji. It was just a happy co-incident that I was invited and honoured at the College in the days when we were celebrating the 550th Prakash Purab of the great Guru Nanak on November 12. The insignia of the College “Truth is Immortal” represents the lofty philosophy of Guru Nanak.

Prof Balbir Chander set the ball rolling by his crisp but thought provoking remarks on the Abrogation of Article 370 as a teacher of Political Science of long standing. Though he accepted the fact of demolishing the special status to J&K yet was not happy as to how the GOI had taken the decision abruptly without caring for the sensitivities of the people of J&K. I spoke in a layman’s perspective on the issue and gave the historical background of J&K’s accession to India on October 26, 1947 and the roles played by Lord Mountbatten, Pandit Jawaharlal Nehru, Maharaja Hari Singhand Sheikh Abdullah in incorporating Article 370 in the constitution of India conferring the Special Status on the State of J&K. I 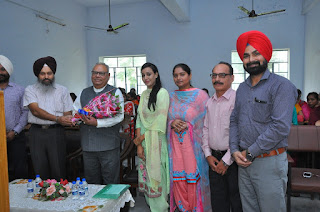 also gave an overview of the position and role of the opponents, the right wing Hindu outfits, of the Article 370 led by Syama Prasad Mukherjee with reference to the slogan “Ek Bidhan, Ek Pradhan, Ek Nishan”. Explaining the genesis of the Special Status accorded to J&K, I quoted from the Instrument of Accession “Nothing in the Instrument of Accession deemed to commit me in any way to acceptance of any future constitution of India or fetter my discretion to enter into arrangements with the GOI under any such further constitution”. I added said that obviously the accession was conditional and to satisfy the wishes of Maharaja Hari Singh and Sheikh Abdullah, perhaps, Article 370 was stipulated. It was said to be opposed by Sardar Vallabh Bhai Patel as often quoted and flagged by Jan Sangh/BJP/RSS. But to my mind, I added in my Talk, that it was not so. Sardar Patel was a leader of his own standing. If he did not agree with PM Jawaharlal Nehru on such an important issue having far reaching consequences for the nation, he should have registered his opposition and concern by resigning from the Cabinet as the norms of collective responsibility in a parliamentary democracy demanded. But it did not happen. Referring to often flouted PM Atal Bihari Vajpayee’s middle path to solve the problem – Jamhooriyat, Kashmiryat and Insaniyat, I said that it was a good approach but mostly remained on paper and added that with the BJP and its allies coming to power with absolute majority, the scenario changed immediately and they carried forward their pronounced agenda on August 5 and abolished the special status of J&K. Explaining the Administrative, Legislative and Legal implications of the abrogation of Article 370, I said that it was gratifying to note that the GOI was serious to address the issue head on in order to fully integrate J&K with the rest of the country as PM Narendra Modi said, “New system is aimed at building a strong link of trust.” Concluding the Talk, which was heard by the audience comprising of young students, mostly girls, with patience and engagement, that it was time to make a new beginning? GOI must deliver to address the aspirations of the people of J&K and fulfill the promises made. The leadership and people of J&K must accept the new realities. We need to pay special attention to the issues of civil liberties, human rights and political rights which are to be resorted to the people of J&K to ward off the dangers of attracting undue attention of lobbyists beyond our borders who tend to speak from the roof tops to promote and carry forward their own vested agenda. I added that let us realize the fact on the eternal beauty of J&K registered by non else but Mughal Emperor Jehangir “If there is a heaven on earth, it is here, it is here, it is here” – Gar Firdaus Bar-rue Zamin Ast, Hami Asto, Hamin Ast. It was followed by an informal interaction with the students and the discerning members of the faculty by way of questions and answers which resulted in further clarity to put the things in its right perspective.

It was gratifying to feel from the thanks giving remarks of Principal Dr. Kulwant Singh Phull, a low profile, humble but an erudite intellectual and educational administrator that we could profitably talk and deliberate on an important topic of interest and concern to mutual advantage. I wished Principal Phull and the College all the best and further success in its Silver Jubilee year and the years to come.

Posted by ramesh chander at 4:47 PM