The Kartarpur Corridor to be built on both sides of the international border between India and Pakistan - to link Dera Baba Nanak in Gurdaspur district on the Indian side and Narowal in the Shakargarh district on the Pakistan side to facilitate the faithful to visit Gurdwara Darbar Sahib in Pakistan - where the great Guru Nanak Devji spent more than 18 years of his life before leaving this world in 1539, is in news. In Pakistan also Guru Nanak Dev is revered as Nanak Shah Pir even by Muslims. Both sides agreed to develop the corridor amidst palpable tension and mistrust between the hostile neighbours ostensibly to placard the Sikh community on one hand and carry forward their diplomatic and strategic interests on the other. The issue had been engaging attention of the Sikh followers ever since partition of the country in 1947. Akali leader Kuldip Singh Wadala flagged the issue in recent years and did his best to register the Sikh interest on the issue. More recently, a few months ago when Imran Khan, a friend of Indian leader Navjot Singh Sidhu from their cricketing days, came to power, the issue of Kartarpur Corridor became alive. Navjot Sidhu, among others, was invited to the swearing-in ceremony of PM Imran Khan which he attended. Pakistani leadership,th anniversary year. It resulted in a much debated mostly acrimonious slugfest between the Congress Party, the opposition and the ruling party at the centre, BJP and also the Akalis. Petty politics came to the fore on the Indian side without realizing the wider implications of the issue. Pakistan, it seems, nurtured its tactical and strategic agenda with regard to the issue to carry forward their nefarious activities to revive terrorism in Punjab taking shelter under the religious sentiments of the Sikhs not only on the Indian side of the border but also in other countries. It seems that Government of India did not take the issue seriously and left it to the political mudslinging for brownie points. Seeing the forthcoming scenario in the wake of Pakistani moves in this regard, the Indian establishment also woke up on November 22, barely a week before the pronounced Pakistani action of “ground breaking ceremony” of the Kartarpur Corridor scheduled on November 28 by PM Imran Khan. The Indian side, in a knee jerk reaction, announced the Dera Baba Nanak Corridor, along with other initiatives, to commemorate the 550th anniversary of Guru Nanak Devji and requested its Pak counterpart to join hands and develop the Kartarpur Corridor. PM Narendra Modi equated the project with the breaking of the ‘Berlin Wall’ in 1989-90. Preempting the Pakistani date, the Indian side laid the foundation stone of the Dera Baba Nanak – Kartarpur Sahib Corridor on November 26 by Vice President of India M. Venkaiah Naidu in the presence of CM of Punjab Captain Amrinder Singh and other dignitaries. Pakistan again stole the show and put the ball in the Indian court by inviting EAM Sushma Swaraj to the Ground Breaking Ceremony on November 28. They also invited CM Amrinder Singh and Navjot Singh Sidhu. Both the Akalis and the BJP and also the establishment at the centre had been criticizing and undermining Navjot Singh Sidhu’s going to Islamabad for the swearing in ceremony of his friend Imran Khan and his bon-homie with General Qamar Bajwa with regard to Kartarpur Corridor. Now EAM Sushma Swaraj found herself in a fix to accept the invitation of her Pak counterpart Shah Mahmood Qureshi for the ceremony on November 28. It was decided to decline the Pak invitation on the pretext of ‘diplomatic pre-occupation’ of EAM Sushma Swaraj with a view to downplay the Pak initiative to do ‘business as usual’ and instead line up a Ministerial delegation headed by Minister Harsimrat Kaur Badal accompanied by an outstanding diplomat and now Minister Hardip Singh Puri. CM Amrinder Singh has declined the invitation in his own wisdom on a terse note of Pakistan’s ongoing terrorist activities and regularly killing our security personnel on the border and Line of control. Minister Navjot Singh Sidhu will be going again to be with his friends on the other side of the border under the influence of “Kartarpur Spirit” a term coined by Sidhu himself. It has also been reported that a high power delegation of Sikh clergy headed by President of SGPC Gobind Singh Longowal will also be participating in the ceremony in Pakistan. All said and done, obviously, the events pertaining to Dera Baba Nanak and Kartarpur Corridor is going to be an important landmark in the so far troubled relations between India and Pakistan. Both the sides have expressed lofty sentiments to make a good start. Vice President Venkaiah Naidu speaking at the stone laying ceremony at Dera Baba Nanak on November 26 termed the corridor as ‘passage of humanity, humility, faith and universal brotherhood.’ Pakistani leadership would also say something similar tomorrow, November 28, it is obvious. Let us see. But I have a couple of observations to make with reference to the ‘hurdles’ in the process which PM Manmohan Singh said should not be ‘underestimated. 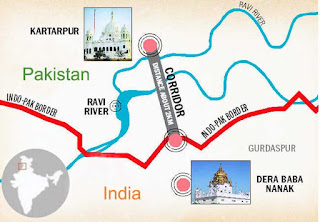 One, Government of India should have handled the issue with some forethought and finesse. Once it was decided to turn down the invitation to EAM Sushma Swaraj, there was no need to send two uninvited important ministers to convey the message of lukewarm response, if it was intended. Showing large heartedness and magnanimity setting aside the internal politics, CM Amrinder Singh, who was otherwise invited, should have been asked to lead the delegation with Hardip Singh Puri, a seasoned diplomat of India, as a member to represent the central government. Navjot Singh Sidhu should have been included in the official delegation to reign in his flamboyant enthusiasm. President of Akali Dal Sukhbir Singh Badal might have been included in the delegation to balance the representation.  There was no need for Harsimrat Kaur to go just to cater to her religious sentiments. This exercise should have sent a good message not only to Pakistan but also to the local politically frenzied approaches. It could have avoided unnecessary acrimonious petty politics which was witnessed yesterday at the ceremony at Dera Baba Nanak in the presence of Hon’ble Vice President of India. I don’t know as to what was the input of our diplomatic establishment i.e. Ministry of External Affairs in this regard.

Second, it is time to assess and understand the likely nefarious designs of incorrigible Pakistan to create further troubles for India by misguiding the hardcore Sikh elements in reviving the militancy in Punjab. The Sikh community, with a proven track record of nationalistic and patriotic conduct throughout, should be introspective and should not succumb to the machinations of Pakistan in exploiting their religious sentiments to achieve their agenda of bleeding the Indian nation any further. The militant groups like the Dal Khalsa and other Khalistani outfits and supporters of Refrendum 2020 have already started criticizing Captain Amrinder Singh for his terse and straight message to Pakistan while declining the Pak invitation. There was no option left to him in the emerging situation but to stand up and speak to save his political standing. Let the Kartarpur Spirit prevail. Let it be a “beginning of a new chapter” as stated by VP Venkiah Naidu to build “bridges across old chasm”.

Posted by ramesh chander at 6:47 AM