Khuralgarh Sahib – Guru Ravidass Memorials- With a lapse of more than three years, I visited Khuralgarh Sahib–Guru Ravidass Memorial of Charan Cho-Ganga at Garhshankar in Hoshiarpur district of Punjab on May 26 for a meeting of Schedule Caste Entrepreneurs Empowerment Forum (SCEEF) of which I happen to be a “Margdarshak” which was hosted by Sant Satwinder Hira at the holy site of Guru Ravidass. I regret to say that I could not see much change in the not so happy situation as far as the progress and development of the memorial is concerned except a newly done approach road to the site. 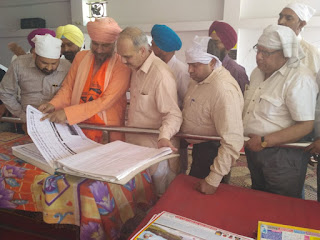 The things were as disorganized as it were. The important spots like the holy tree, charan- cho-ganga among others are still in tenements and dilapidated. The path ways are not in place. There was no vehicular control. All kinds of big and small vehicles were entering the main compound and parked as one liked. People were squatting all over even in the sanctum sanctorum (main hall) of the memorial. There were no arrangements for the removal of shoes. New construction was also taking place in a hap-hazard way. There was no proper arrangement for the recital of Gurbani and Kirtan. The tenement shops in the compound were yet another nuisance to add to the list of some of the shortcomings at this important memorial. I venture to write this not to criticize but to alert and make aware the management of the site and the followers of the great Guru with a view to have introspection and move for the better.

It is easier said than done. I was informed that the new management under Sant Satwinder Singh Hira was fully seized of the matter and were gearing themselves to set the development of the site in motion. I personally witnessed that Sant Hira was fully engaged in meeting people, particularly the younger lot, with a view to see that the memorial of Guru Ravidass was developed as it should be. It was gratifying to note that an unending stream of faithfuls of all age groups from parts of Punjab and even from outside were barging in to pay their obeisance to the revered Guru. The spirit and sense of identity was clearly visible on the faces of these spontaneous visitors.

The area and the identified sites to be developed as memorials has a considerable potential to become a tourist trail with – the Charan-Cho-Ganga, Minar-e- Begumpura, Sute where Guru Ravidass was kept in Jail, Tourism Guest House and other related facilities. I would like to take this opportunity to urge the concerned Deras/Managements and both the Governments of Punjab and the Centre to pay added attention to give impetus to the development of the memorials of Guru  Ravidass, an apostle of harmony and fraternity as a befitting tribute to the great Guru.

Wooing of Dalits by the Privileged Hindus – The socio-political paradigm of the country is changing fast and rightly so. The things have come full circle, it seems. The forces of democracy unleashed by icons like Guru Ravidass, Jyotiba Phule, Babasaheb Ambedkar, Mahatma Gandhi, Babu Kanshi Ram, inter alia, contributed to the process as ‘Game Changers’. The principle of ‘one vote; one value’ has resulted in ‘Vote Banks’ which the political parties dare not ignore. Keeping these ground realities in mind, RSS, 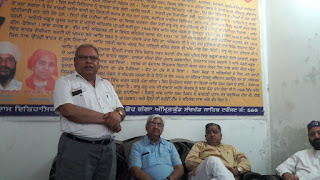 BJP and even the left parties like CPI, CPM and even SP and regional parties, who hitherto kept considered distance from Babasaheb Ambedkar and his mission, are falling on each other to claim the legacy of Dr. Ambedkar on one hand and the Congress Party, who enjoyed the backing of dalits for long   since independence with Babu Jagjivan Ram, D. Sanjivia and their associates as its allies, is trying to woo the dalits to have their continued support. The recent dalit assertion for social change and the fast changing political alignments based on caste considerations have compelled all social and political forces in the country to woo dalits at least in their apparent and openly professed love for dalits. My own small but firsthand experience in the small towns in the doaba region of Punjab clearly gave me a sense of the agenda being carried forwarded by the right wing Hindu outfits under the overall control and direction by the RSS. Of late, some Sants of established spiritual Deras of Punjab, Sant Satwinder Hira of All India Ad-dharam Mandal and Baba Nirmal Singh Jaure of Jalandhar, were invited to Nagpur for respective functions to bring them into the fold of their spiritual, cultural and political scheme of things. The Peeli Kothi, RSS office in Jalandhar celebrated the birth anniversary of Babasaheb Ambedkar on April 14. They invited me as the Chief Guest at the function. Again on May 27, Vidya Bharti at Jalandhar, an educational institution of the RSS, hosted a Talk on “Babasaheb Ambedkar Ke Sapnon Ka Bharat” at which Head of an RSS Think Tank, J. Nandkumar delivered a key note address. I also spoke as a Guest of Honour at the Talk besides an RSS Pracharak Vijay Singh Nadda. On May 26, newly appointed head of the Vishav Hindu Parishad, Alok Kumar and a senior RSS functionary Banveer Singh visited Charan-Cho-Ganga, a Guru Ravidass Memorial, at Khuralgarh in Hoshiarpur and paid obeisance at the holy place. PM Narendra Modi and CM Aditayanath Yogi went to Seergoverdhanpur, birthplace of Guru Ravidass, in Varanasi (Kashi) on the invitation of Sant Niranan Dass of Dera Sachkhand Balan, the custodians of the Guru Ravidass Memorial at the site.These are some of the recent activities of the right wing Hindus to placate dalits of Punjab. It seems that they are more than eager to make inroads into dalit vote banks in the run up to the 2019 elections. They very well know that the RSS agenda was still an anathema to most of the dalits but still they would not leave it at that to change the dalit perception of the RSS. I advised them, in my humble capacity, whenever they involved me in these activities, that much needed to be done by lifting themselves from mere lip service and media hype and prayers in the closed door meetings. The untouchability and caste based discrimination need to be taken up head on by the RSS and other Hindu outfits. The Manuvadi mindset needs to be changed with sincerity. Sooner the better.

Posted by ramesh chander at 9:12 AM