Malind Prakashan of my friend Harmesh Jassal has added yet another book – Dr. Ambedkar, Human Rights and Graded Inequality - to its publications on Buddhism, Babasaheb Ambedkar and matters of concern and interest to the community, particularly to the Buddhists and Ambedkarites living in India and abroad.  I have added a ‘Comma’ on my own after Ambedkar in the title of 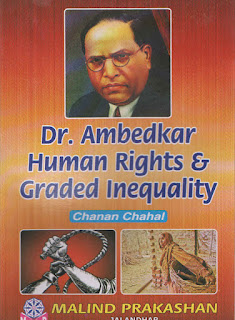 the book without observing that, to my mind, the title does not read well. The book is a compilation, as written by the publisher Harmesh Jassal also, of random write-ups of Late Chanan Chahal of the UK which he wrote over the years of his social and community activism beginning in the early 1960s. No one has cared to mention his life span, neither the publisher Harmesh Jassal nor one of his close friends, D.R. Rattu, whose detailed account about Chanan Chahal occupies a prominent space in the book. I understand Chanan Chahal who was an ardent Buddhist and a staunch Ambedkarite passed away at a young age. But his writings and social activities have kept him alive in the memories of his friends and the community at large. Going through the brief bio-sketch of Chanan Chahal and a couple of his books on topical subjects of interest like ‘Why I am not a Hindu’ (Mein 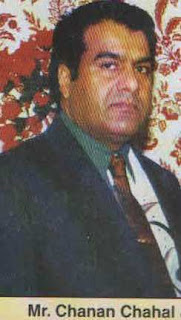 Hindu Kyon Nahin in Punjabi) besides his three books- I) Caste the Curse of India, ii) Dr. Ambedkar and Social Reform and iii) Was Guru Ravidass Proud of his Caste published by Malind Prakashan itself, one can say that he was an enlightened and educated person living far off in metropolitan cities of the UK from his roots in rural Punjab but still maintaining and caring for the legacy of his community and its icons like Guru Ravidass and later that of Gautama Buddha and Babasaheb Ambedkar in the early years of ‘Dalit Chetna’. But by reading his writings and about his personal life I wonder why Chanan Chahal did not mention anything about Babu Kanshi Ram, Mayawati and others, given the awakening and thinking he possessed in the volatile years of dalit assertion. Chanan Chahal, as noted by his friend and associate D.R. Rattu, also spoke at the UNESCO in Paris on the theme ‘Plight of Dalits in India’ and many such organizations with regard to the issues of concern and interest to the under-privileged segments of the society. May be there is more material which would see the light of the day in the coming years. His friends like Harmesh Jassal should listen and carry forward the mission of Chanan Chahal and some more Chanan Chahals living here in India and in foreign lands.

Coming to the book, there are 14 essays or articles of the author Chanan Chahal edited and compiled in the book. These 14 chapters may be divided, subject wise, into three categories – Babasaheb Ambedkar and his contribution to the Indian society and polity, Social inequalities in India and Revival and significance of Buddhism. There is nothing, let me be frank and objective, new in the contents of these write-ups but the fact that Chanan Chahal choose to consider and pick up these subjects to write about when it was difficult to stand and say something on Babasaheb Ambedkar and his mission and that too abroad in the 1960s. In these essays he has quoted extensively from Dr. Ambedkar’s writings and speeches. In the first write up on human rights, he quotes Ambedkar on Brahmanism, “By Brahmanism, I mean the negation of the spirit of Liberty, Equality and Fraternity.” Yet another quote - I don’t know the authenticity of the quote attributed to a Member of the House of Lords of the UK, Bhikhu Parikh, on page 20 of the book, “The untouchables are physical pollution, and moral pollution and they are mental pollution on the society”. It is strange how an MP of the UK can utter this nonsensical formulation. The write-ups clearly register that Chanan Chahal was fully committed to the philosophy and mission of Babasaheb Ambedkar and 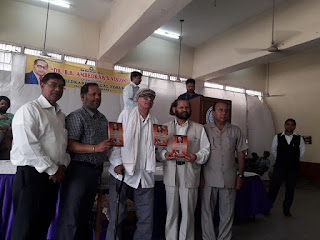 Gautama the Buddha. While keeping himself busy in these matters, he tried his best to make a mark back home in Punjab. His active involvement in Buddhist projects namely Punjab Buddhist Society and Takshilla Maha Buddha Vihar in the Doaba region of Punjab are listed in the essays on Buddhism. The idea of writing a review of the book is not any notion of intellectual exercise but to contribute a bit to motivate the younger generation of Ambedkarites and Buddhists to read and step into the shoes of their forefathers like Chanan Chahal. It may also be considered my humble tribute to Chanan Chahal for his untiring efforts to address the issues of interest and concern to the community and the society at large.

I will fail as an objective reader if I don’t say that the book has its shortcomings. The editor and publisher should have paid a little more attention on the trivial details of spellings, language and presentation. I have observed that many quotes and considered important text has been highlighted which was not needed. Nevertheless, I wish the book, launched on the solemn occasion of the birth anniversary of Dr. B.R. Ambedkar on April 14, 2018, will be received well.

Posted by ramesh chander at 8:29 AM