Debt of Gratitude to Ones Alma Mater

Debt of Gratitude to Ones Alma Mater

It has been observed that one does not generally forget ones productive years spent as a student at respective educational institutions. One remains eager to pay the debt of gratitude to ones alma mater as and when such an occasion arises. I witnessed and experienced a touching event this week. A senior retired Indian diplomat, Ambassador Bal Anand, delivered an interactive talk at his alma mater DAV College in Jalandhar on March 26. He shared his diplomatic experiences with the young students and the members of faculty at an informative and interesting session on the theme “Representing India around the World: Memoirs of a 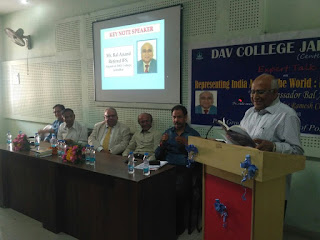 DAVian”.  Emotionally charged, being a student and a teacher at the esteemed DAV College before joining IFS in 1971, Ambassador Bal Anand persuaded and motivated the students to choose their careers carefully to become dignified members of the society. He gave an interesting overview of his diplomatic experiences, as an ‘undiplomatic diplomat’ and more as a teacher. It was a unique hands-on exercise for the students and the discerning members of the faculty. Ambassador Bal Anand not only shared good anecdotes but also quoted liberally from his three books, Naye Niband (Punjabi) – his articles in the GOI publication Yojna on developmental issues, Sukh Sunehein (Punjabi) – a compilation of his correspondence with his kith and kin and also with his friends and his latest publication, Expressions of Freedom (English) – an anthology of his articles and writings over the years on various subjects of interest and concern. Ambassador Bal Anand graduated from the DAV college in the early 1960s and later joined the English faculty at the esteemed college in 1966 in the run-up to preparing for the civil services examination. The audience, mostly comprising of graduate and post graduate students of political science, was duly charged and spirited by the engaging demeanor of Ambassador Bal Anand and the inter-active session was virtually turned into a dialogue of the experienced and inquisitive minds. The honours to preside over the function fell on me. It was an added honour to be with my senior colleague and friend philosopher, Ambassador Bal Anand Sahib. In my brief remarks I complimented the College, my alma mater too, and Ambassador Bal Anand for the fascinating and thoughtful interaction for the benefit of the young students. Commenting on the foresight and diplomatic acumen of Indian diplomats I recited an Urdu couplet:

Dr. B. B. Sharma, Head of the Political Science Department of the College welcomed Ambassador Bal Anand. Prof. Dr. Dinesh Arora ably conducted the proceedings of the function as Master of 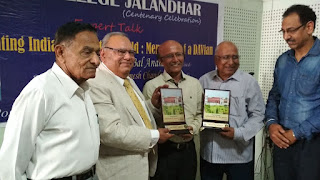 Ceremonies. Jagish Chander Joshi, a senior Scholar and Historian and a DAVian of standing, introduced the Chief Guest and in his usual poetic style said, referring to Ambassador Bal Anand:

The sense of belonging was clearly over-flowing not only in the speeches and interaction but also in the general atmosphere around. Though it is said that ‘Diplomats think twice; before saying nothing’ yet everything was said to pay the debt of gratitude to the temple of learning, our alma mater, DAV College Jalandhar.

Posted by ramesh chander at 5:20 PM