Bootan Mandi is a non-descript mohalla of Jalandhar which is considered as the capital and nerve centre of dalit consciousness and empowerment. It is my native place. I have come back to my roots after retirement from a long diplomatic career. Guru Ravidass Jayanti or Gurpurab, every successive year has been an integral part of the social and spiritual life of the residents of the area. Yesterday, January 24, I joined the solemn function, after more than four decades; at Satguru Ravidass Dham to set in motion the festivities and celebrations of the Gurpurab which falls on January 31 this year. The cherished memories of my childhood and formative years of my youthful days became alive. I thought of sharing my impressions and feelings in this regard.

Guru Ravidass Gurudwara, where the majestic Satguru Ravidass Dham now stands, was a make shift Gurudwara which also housed the primary school of the mohalla where I have done my primary schooling. Guru Ravidass Gurpurab celebrations, generally called “Janam Dihada” of the Guru, were the only major activity at the site other than the school, privately run by the mohalla committee. A week or ten days before the Gurpurab, the ‘Path Rakhna’ 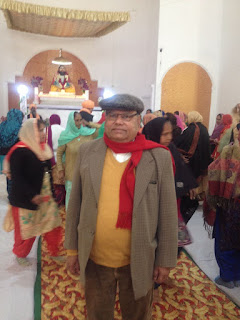 ceremony was done with great gaiety. Sri Guru Granth Sahib, in those days, would be shifted from the residence of Swami Lalji Dass, a revered spiritual master of the mohalla, to the make shift Gurudwara. The period of celebrations would begin with ‘Prabhat Pheris’ before the break of dawn, the traditional Dhol called Tamk will relegate with its high volume of sound to celebrate the joyous event. I, like all children of the mohalla, delightedly joined these activities and felt well. It was a recall of these memories down the lane when I joined the “Path Rakhana” ceremony after a long time. I felt that though the ground situation has changed over the years with a permanent Satguru Ravidass Dham for such events yet the traditional fervor was still prevailing.  It will not be out of place to mention that Satguru Ravidass Dham at Bootan Mandi is the result of good and positive contribution of my fellow BootanMandians and the community at large particularly by Ex-Mayor of Jalandhar Surinder Mahey and Seth Sat Paul Mall, among others. But it is a matter of great regret that on account of some vested agendas and for selfish ends of the people at the helm of affairs, the project is hanging fire and cries for completion. I only hope that the new dispensation which in the offing would consider and take the matters seriously to complete the project after the Gurpurab celebrations are over. It will be the biggest and befitting tribute to the memory of Guru Ravidass, the champion of equality, liberty and fraternity and also harmony in the society. The faithful and the participants exchanged greetings and invoked blessings of the great Guru Ravidass.

It was a matter of honour and satisfaction for me later towards the close of 1960s, I myself was a part and parcel of these arrangements as the Secretary General of the then Guru Ravidass Youth club and the welfare society. Later I lost touch and the aura of these community activities when I moved to Delhi in early 1970 to pursue my career. It is a matter of satisfaction, subsequently, my younger brother, Paramjit, stepped into my shoes and became and remained the General Secretary of Guru Ravidass Educational and Charitable Trust for many years. Now again in my retirement and advancing age, I am happy to be here to join my folks in and around Bootan Mandi, my old associates and friends, inter alia, Manohar Mahey, Prem Shant, Hardial Banger, Sat Paul Mahey. It is a matter of gratification to note that the followers of Guru Ravidass and many of my friends on Facebook have responded overwhelmingly to my cursory post on the “Path Rakhna” ceremony with a ton of hits and comments. It only shows that Guru Ravidass was the real icon of the weaker sections of the society, and will remain so in the years to come, who contributed a lot in raising the social and spiritual consciousness among the poor masses towards establishing an egalitarian society.

We are all set to enjoy the festivities in the run up to the finale of the Gurpurab on January 31, 2018.


Today, January 25, 2018, is another day of rejoicing for the BootanMandians that one of the daughters of the soil, Surinder Kaur, has become the Senior Deputy Mayor of Jalandhar city. Congratulations to Surinder Kaur on her elevation to the coveted position in the hierarchy of the city. It is matter of pride that earlier in 2000s yet another son of Bootan Mandi, Surinder Mahey, had adorned the high position of the Mayor of Jalandhar.
Posted by ramesh chander at 4:12 PM