Lahori Ram Balley (July 20, 1930), an ardent Ambedkarite and a social and political leader of Jalandhar, entered his 88th year last week week. I wished him happy birthday and early recovery from the hip injury which inflicted him recently during one of his journeys to Rajasthan on community business. With God’s grace, Balley Sahib is fighting fit otherwise. Balley Sahib is an icon of Ambedkarites, Buddhists and dalits of Punjab and beyond. People duly recognized his immense contribution to the betterment of the
community and the society at large. As a popular leader in the area, he is easily available and eager to meet people to listen to and discuss matters of interest of the community and the country. I thought of writing about Balley Sahib in appreciation and recognition of his on-going yeoman’s service to the community and the society at large. 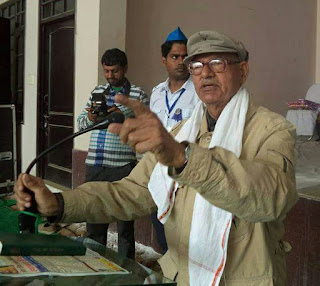 Though I know Balley Sahib for the last more than 50 years, yet my direct inter-action started only on my retirement and return to my roots in Bootan Mandi five years ago. I vividly recall Balley Sahib moving on a bicycle in Bootan Mandi in early 1960s in communist style khaki with a typical Lenin or Stalin cap. The office of his newly launched brainchild “Bheem Patrika” started in 1958, if my memory does not fail me, was located at Guru Ravidass Gurudawara at Bootan Mandi where I was a student in the primary school run by the Seths of Bootan Mandi.  My social and political awareness started in the family at a young age of about 10. Now I feel that Balley Sahib’s silent contribution in my awareness or education in this regard was considerable. Both my grandfather and father were socially alive and staunch followers of Dr. Ambedkar. My father was a regular subscriber to the Bheem Patrika of both Urdu and Punjabi editions. I admit that the address sticker of the postal delivery of the weekly “Munim Sodhi Ram, Ramdaspura (Bootan Mandi) Jalandhar”, is still clearly photographed in my mind.  I tended to read and even digest the weekly Bheem Patrika diligently. I remember the headlines: Hamdard or Dushman – a story on the Chief Editor of Punjabi daily Sadhu Singh Hamdard, Meri Videsh Yatra – a travelogue of Editor Lahori Ram Balley’s first visit to the UK in the mid 1960s, a satirical account of the activities of Piara (Puada) Ram Dhanowalia, Charan Dass Nidhadak (Naghadat), Duni Chand Shahpuri (Swapuri) in the wake of their parting company with Balley Sahib on account of differences on the formation of Punjabi Suba. I revered Balley Sahib as one of the finest writers, orators and thinkers the community has produced over the years. He still holds that charm at 87. It is a matter of satisfaction. I recall an anecdote. During one of the parliamentary elections for the Jalandhar constituency in which the heavy weights, Swaran Singh of the Congress Party and Harkishan Singh Surjit of the Communists, were the main rivals. Krishna Menon, considered to be the best orator, came to speak in favour of Swaran Singh. It was suggested and considered that it was Lahori Ram Balley only who could stand and counter Menon. He is an orator par excellence – Jadu-bian-Mukarar.  My father told me this as oral history. In his young days, Balley Sahib was a firebrand leader. My father took me along on a protest march of the Republican Party in front of the then DC’s office in the mid 1960s. I saw young Balley in action, leading from the front and shouting from full throat “Firkaparast Nehru – Murdabad”.  I saw and heard Balley Sahib interpreting into Punjabi  Joginder Nath Mandal’s  speech in English at Bootan Mandi and later that of the High Commissioner of Sri Lanka at Ambedkar Bhawan at Jalandhar. His stock in my mind went considerably up.  I understand Balley Sahib also contributed his bit to the Justice S.R. Das Commision of Enquiry constituted against the then CM of Punjab Partap Singh Kairon. It was an appreciable political activity at that time. Seeing him now performing and conducting himself with aplomb and dignity, he qualifies to be leader by his own right.

Lahori Ram Balley is a committed Ambedkarite and Buddhist. He resigned from a cozy government job and dedicated himself to the mission of Babasaheb Ambedkar in 1956 to fulfill his word to Babasaheb. He became a much sought after politician under the banner of Scheduled Caste Federation and Republican Party. Many politicians from all shades and hues envied him as a leader of the masses. He contested both assembly and parliamentary elections from a general seat. Being a Buddhist he was not eligible then to contest from a reserved seat unlike now. Apart from politics, Balley Sahib continued and nurtured his intellectual interests. He still publishes Bheem Patrika started in 1958. He has written and translated a number of books on Ambedkar and his mission which are readily liked by the followers of the great leader and also by the students of contemporary history. He is one of the founding trustees of established institutions like Ambedkar Bhawan Trust Jalandhar, Ambedkar Mission Society, many outfits relating to Gautama Buddha, inter alia. Being a bold writer and unstoppable persona, Balley Sahib also has attracted and invited a fair share of controversies on his writings and utterings viz. court cases on his books “Hinduism Dharam Yan Kalank” and “Rangila Gandhi” and his political rivalry and spat with Piara Ram Dhanowalia, Babu Kanshi Ram, among others. Anyway, it is, to my mind, is a part of the game in which Balley Sahib is a top ranking player.

When I thought of writing this, it was only to wish Balley Sahib on his birthday as part of my serial blog ‘Bits and Pieces – As I Please” but it has gone beyond my intension and I thought of posting it separately. There is so much to write about Lahori Ram Balley. Let us leave it to some other occasion. I understand that his autobiography is almost ready and awaiting final touches. It will be good to listen and learn from the horse’s mouth.

Posted by ramesh chander at 3:42 PM