I was invited to talk to students of the esteemed Banarsi Dass Arya Girls College in Jalandhar on March 7, 2017 about India’s Foreign Policy. Accordingly, I spoke at a well organized function and gave an overview of the foreign policy of India starting from its historical perspective and concluding with the current contours of the policy. My talk was primarily based on the book ‘India’s Foreign Policy’ written by a renowned diplomat and former Foreign Secretary and National Security Adviser, J.N. Dixit. In the concluding phase, I relied on the speeches of Foreign Secretary Dr. S. Jaishankar and PM Narendra Modi delivered at the recently 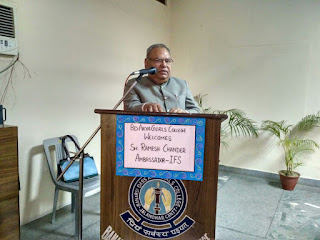 concluded ‘Raisina Dialogue’ in January, 2017 in New Delhi. The intension was not to provide in-depth analysis with academic or intellectual expression but to make it as simple as possible for the benefit of the young students mostly with rural background and schooling. I think, going by the apt attention in the full-to-capacity auditorium and subsequent interaction and also by the remarks made by the other speakers, the talk was well received. It was a matter of satisfaction for me.

Informing the young students about the functions of an Indian diplomat, I briefly mentioned about the Indian Foreign Service and mode of entry into the service for the benefit of the would-be aspirants to join the service. It was much appreciated. After providing the historical background and evolution of India’s foreign policy since independence in 1947, I mentioned that the strategic intent is shaped by our civilizational ethos and quoted PM Narendra Modi for the cardinal principles of the policy:

Concluding the talk, I said that experts were of the view that “in the world of diplomacy, some things are better left unsaid”. I would like to go by that advice and quoted Ambassador T.P. Srinivasan “Diplomacy is about words – written, spoken and unspoken”

Professor Jagdish Chander Joshi, an advisor to the college, was instrumental in introducing me to the college and inviting me to speak at the event. He spoke with conviction and while introducing me to the audience said Jalandhar was proud of producing diplomats of high caliber and intellect and named Prof. Manohar Lal Sondhi, Ambassador Bal Anand, Ambassador Sharat Sabharwal among others. Being a professor of history, he touched 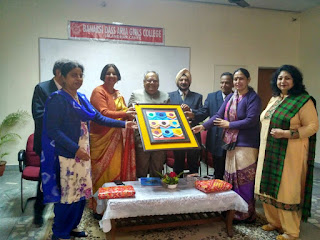 upon the concept of buffer states and their desirability and importance in the shaping of foreign policy of India particularly with reference to Afghanistan and Tibet. Lt. Col. Manmohan Singh, Former District Sainik Welfare Officer and Former Director of National Institute of Competitive Examinations also spoke and advised the students to learn and get ready to enter their respective careers including the IFS. Principal Sarita Verma in her welcome address said that it was an honour for the college to invite and listen to the talk on India’s foreign policy and said that the students would certainly benefit from it and get motivated to join the IFS in the days to come. She also thanked Prof. Neeru Sharma Head of the Political Science Department of the College for organizing the function at a short notice. Commander of the BSF (Retired) P.K. Mohla who himself served with the Indian Peace Keeping Force in Eastern Europe in the late 1990s was also present on the dais. Prof. Meenu Nanda conducted the function as an expert Master of Ceremonies and regaled the audience with her poetic interjections.

As stated in the college website - Banarsi Dass Arya Girls College is one of the leading educational institutions of Jalandhar catering to the educational needs of both urban and rural areas. The college was founded by Arya Samaj  in 1964. B.D. Arya Girls Collge as a full-fledged affiliated college came into existence in 1970. The college has emerged as an operational model for value oriented education in and around Jalandhar Cantonment area.. Besides academic excellence, the college encourages maximum participation of students in sports and extra co-curricular activities.

Posted by ramesh chander at 5:39 PM