Some Random Thoughts - On Joining the AAP

I remained a faceless diplomat for more than 35 years before my retirement from IFS in December, 2010. I decided in the beginning of 2003 to come back from Delhi to my roots in Jalandhar with a view to integrate myself with the community and repay the debt of gratitude I owe to the society in a humble way. In the process of my settling down, I chose to associate with the education sector to begin with. Sant Baba Bhag Singh University was gracious enough to nominate me on its Board of Governors.  I ventured to start an educational outfit – Jalandhar School of Careers and Opportunities to benefit the children of my native place Bootan Mandi and nearby localities. Given my background and interest, Doordarshan Jalandhar provided me a window to reach out to the wider audiences through its various programmes to which they invite me occasionally. Some of the leading schools and colleges in and around Jalandhar associated me with their activities and invited me to speak at various functions. I associated myself with the community functions, particularly pertaining to Dr. B.R. Ambedkar and Guru Ravidassji, to satisfy my social yearnings. These activities kept me busy as my post retirement engagement which, in a lighter vein, I termed as my ‘Second Innings'.

Some of my friends and also my immediate family, my brothers and sisters, have been suggesting me to join public life and share my wide experience with the society. But I remained reluctant because of my perceived temperament and training. Would I be able to withstand the dust and din of politics? Would I be able to go thick skinned, said to be an important attribute of a politician? Do I have the needed ‘killing instinct’ which a politician generally uses to deal with his adversaries? The increasing role of money, with my own scarce finances, in politics always remained a concern with me. But as an enlightened citizen, I remained fully live and informed of the changing political scenario, of late. Over the last three years or so, the Aam Aadmi Party (AAP) under the leadership

of Arvind Kejriwal has thrown open some new avenues and opportunities on the political firmament of the country. It started from the core issue of corruption which has eaten the vitals of the polity and society at large. The AAP opted for clean and transparent politics. It negated the VIP culture from which the common man on the road was suffering. It supports and pleads for social justice, as enshrined in the constitution, for empowerment of the weaker sections of the society. Above all, the AAP stands for power to the people as stipulated in the preamble of the constitution with a view to establish ‘Swaraj’ and an egalitarian society. I thought, perhaps, the time has become. The AAP, a party with a difference, appealed to me. It has come but is yet to reach. I seriously pondered over all these points. Meanwhile, my well wishers have been cajoling me to take a plunge into politics and join the AAP, an emerging party on the political landscape of India. Sometime in January, 2016, I did not tell anybody and enrolled myself online and became a member of the AAP. I sent an E-mail message to the Convener of the AAP, Arvind Kejriwal and to the Central Observer, Sanjay Singh and solicited their advice on making my joining the party public at an appropriate occasion and requested for an introductory and courtesy call on them during their next visit to Jalandhar. I waited for a response for a couple of weeks. There was no response which worried me a bit as I was sure that the AAP would respond and behave differently. In the second week of February, 2016, I took the liberty of writing again and requested for a suitable response. I also told them that I was a political novice and it was my maiden entry into public life. I also told them that I did not know anybody of the AAP leadership in Jalandhar. There was a quick reply by E-mail on February 21 from the AAP headquarters, to my satisfaction, telling me “Dear Rameshji Please give us some time. Our team will be in touch with you”. The process of my joining the AAP formally began with a telephone call from Delhi, on the evening of February 22, welcoming me into the AAP fold and advising the party leadership in Jalandhar to get in touch with me to make a formal announcement in this regard. The Central Zonal Observer, Rajiv Choudhary contacted me and we met on February 23 and decided to go ahead. Accordingly, my joining the AAP was formalized at a joint press conference at the Jalandhar Press Club on February 24, 2016 in the presence of Rajiv Choudhary and Dr. H.S. Cheema, Zonal Observer and other senior functionaries and volunteers of the AAP. Both Choudhary Sahib and Dr. Cheema offered me the AAP robe of honour and welcomed me to the party. The Press Release issued at the press conference has been appended below. My journey from a faceless diplomat to a humble politician started in all earnestness. The local media, both print and electronic, took a good note of it. Almost all the daily newspapers being published from Jalandhar covered the event in the February 25 editions. I was flooded with congratulatory messages and calls from the cross sections of the society. The news became viral on my Facebook page. I was touched by the encouraging response and all the good wishes of my friends. I found Rajiv Choudhary, a young but mature political guide, friendly and caring. All the party managers and volunteers were very helpful and courteous. I was humbled further. Now, I am fully dedicated and committed to serve the society, particularly the weaker sections, under the banner of the AAP and able stewardship of my leader Arvind Kejriwal and the party hierarchy.

After my joining the party on February 24, my first brief and informal exposure came on February 28 at Hon’ble Arvind Kejriwal’s meeting with businessmen at Jalandhar. I bumped into and registered myself with Sucha Singh Chhotepur, Convener of the AAP in Punjab, Hon’ble MP Sadhu Singh and the AAP Spokesman Sukhpal Singh Khaira. It was also good to sit and talk with my friend Sat Paul Ahir, Retired Income Tax Commissioner who has also joined the AAP recently. I am to meet more people in the coming days to pick up the threads and educate myself to meet the challenges of my second innings as a politician. I will do my best and the rest is destiny. I firmly believe in this shabad from the Gurbani:

·       “Very interesting Bhaisaheb. I hope you have a strong conviction and thick skin for this politics business. I am glad that you would continue to cooperate with and contribute to society. I am actually happy for you and trust you would get your word out.
I would be curious to know what would be your take on AAP Party's stand on reservations to be given on the basis of financial status rather than caste, and most importantly get rid of creamy layers from reservation category for dalits and OBCs...
I believe an educated and scholarly perspective from you would be looked at by masses.
Good Luck to you.”

·       “People like you are the need of hour in today's crisis ridden politics.”

·       “Wishing you all the best in achieving your lofty ideals. Don't forget the deprived sections of the society. They need all our attention as you well know.”

·       “Congratulations Sir. I know of you as a very good person with pleasing manners and helpful tendency. I hope you will succeed in serving the society.” 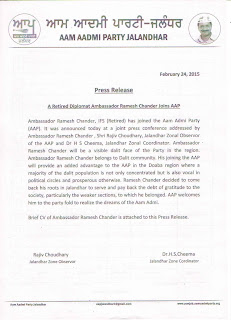 Posted by ramesh chander at 6:16 PM