On losing a dear one 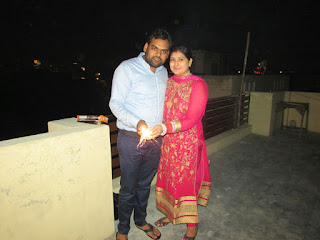 for the last three weeks or so I could not do so. I lost my balance and felt dejected on account of a family tragedy. We lost Brijesh Chander (Bablu), 27 years, newly married (10 months) son of my brother Krishan Lal on November 30, 2015, just in a couple of days, succumbing to a fatal attack of dengue. It was a devastating blow to our family. We belong to an ordinary family of three brothers and four sisters. The sisters are happily married and are doing well in their families. Out of the three brothers, I am the eldest, 65 years, a retired diplomat. With God’s grace and good up-bringing by my poor parents, I could do fairly fine and have no regrets. Krishan, the middle one, is a self made man, in spite of the fact of our difficult days; he could not get a good education and started on his own from scratch in the sports industry. With sheer dedication and hard work, he gave a good education and initial push to his three children. Brijesh, the younger child, was an MBA who decided to be a businessman by the side of his father Krishan in the sports goods market. He could prove himself in a short period of about three years in carrying forward the vision of his partner and childhood friend, Lalit Angural who also left forever suddenly at an age of 23 years succumbing to a severe heart attack. Lalit was the son of my Sambandhi (father of my daughter-in-law Sulekha). Both Lalit and Brijesh were the up-coming and shining stars of our family. Paramjit, my third brother, is also doing well with BSNL in Jalandhar. He has two young and educated sons, Pervez and Umesh, who are also engaged in business in sports goods and are on track. The untimely death of Brijesh has left a wide gap and vacuum which is difficult to fill in our otherwise happy family. It is just very difficult and unbearable to see Reena, 23, the young wife of Bablu who herself was aspiring to join the police force in the sports quota being a trained athlete and state level hockey player. Her future has suddenly become uncertain and directionless. Only time will set the course right.

In accordance with the law of nature, there have been deaths in our family earlier as well. I could not reach and participate in the funerals of any of my direct relations. I controlled my emotions and did not ask my people to delay the funeral on account of my inability to reach in time. My grand-father died in 1972. I was late to reach for the funeral from Delhi. The means were not many and resources were meager. Fearing the untoward due to continuous ill health of my father, Sodhi Ram, I spent a month’s leave in December, 1985 with him in Jalandhar. But he advised me to go ahead and join my new assignment in Kandy (Sri Lanka). Again I could not reach in time to see his face on his death in March, 1986 as it was difficult to come to India from Kandy than any European capital. My grand-mother died in 1996. My sister Kamla and I could not reach in time. Pritam Kaur, my mother died in October, 2005. I could not come from Prague (Czech Republic) due to exigencies of service. I did not, as such, see and experience the pain of death first hand.  I tried and managed things as they came.

Now I am in Jalandhar, back home to my roots after retirement from service. Bablu’s sudden death was a devastating experience for me and the entire well-knit family of ours. A week before his death on November 30, both Bablu and his lovely wife Reena were dancing at the marriage of our niece (sister’s daughter) on November 24. Two days at a hospital in Jalandhar and two days in Ludhiana with deadly dengue took Bablu away from us. There was no delay whatsoever in providing the best of medical help and care but there were no signs of recovery. I personally saw Bablu fighting for life. He wanted, I felt, to live and see the results of his hard work which his young and energetic mind and soul visualized for the family. Bablu was not only my nephew but a friend. After I came back to Jalandhar, I depended on him for so many odd errands which he undertook and did without any hesitation. He used to tease us (me and my wife Vidya) for our simple and frugal life style. Jokingly, he used to say that it was no fun in going to Taiji; she would give us something stale from the fridge. He was such a jovial fellow. I remember once in the days of some marriage in the family, I said before going to bed that now please let me sleep with Shanti (peace). Bablu immediately, with a clear naughty intent, said, ‘Oh Taiji come here, Tayaji is going to sleep with Shanti.’ It was a joke of the day. It was Bablu, our dear Bablu.

Bablu’s funeral was conducted on November 30 and the final rites (Antim Ardas) on December 10. I could see and feel, if I am permitted to say with all humility, how our society in and around Jalandhar felt and joined us in our hour of grief. The entire sports industry and market, where Brijesh and his father Krishan worked, was closed as a mark of respect and sympathy on November 30. More than 2000 men and women joined the funeral procession and paid their homage to the departed soul and consoled the bereaved family. I was told that it was one of the biggest congregations on such occasions in the area. Likewise, on December 10, on the day 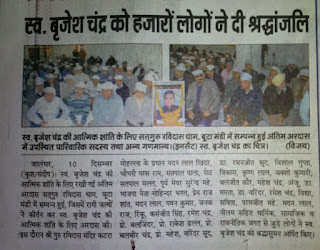 of Antim Ardas, Guru Ravidass Dham at Bootan Mandi where the Ardas was held witnessed unprecedented participation by our friends and relations and was over-flowing the capacity of the huge prayer hall of the Dham. I was touched by the spontaneous and heartfelt sympathies shown by the society with our humble family. We value the love and support of our friends and relations in our hour of grief.

Death is an inevitable reality of life. One has to accept it. There is no other way. But it was beyond my imagination that death of one person could change the entire spectrum of a family. Bablu’s death has exactly done so for my brother Krishan and his homely wife Baksho. They were happy and of late said so many a times while talking in the family. Their three children, after good education, were happily married and were doing well in their respective professions. Daughter, Mamta, is a qualified doctor, married to Dr. Varinder Sood in Ludhiana. Both are practicing doctors at their own clinic. Mahesh, the elder brother of Bablu, is an Assistant Professor in the Engineering Faculty at Sant Baba Bhag Singh University in Jalandhar.  He is married to Anju, an M. Tech and has a lovely daughter. Just recently they started living in their new flat with a view to provide social privacy to the newly married brother, Bablu, at their family home. It is beyond ones comprehension to understand the miserable condition of the wife of Bablu, Reena. They were still enjoying their extended honey-moon. Everything has gone topsy-turvy.    Krishan was contemplating to seek pre-mature retirement from his good job in one of the leading companies in the sports industry. It has to be put on hold. Mahesh will resign from his academic career and join business to stand for Bablu in the nascent company. Mahesh and Anju will have to consider and join the family to live together with parents. Reena requires all support to live a dignified life and start afresh. Obviously, an element of uncertainty prevails and challenges are many fold.

Bablu has left a wide gap which is difficult to fill. One can only pray. Time, it is said, is a big healer.

Posted by ramesh chander at 9:39 AM