On initiatives of PM Narendra Modi at the United Nations General

Assembly (UNGA) in September, 2014, United Nations (UN) decided to observe 21st June as International Yoga Day.  It is a legitimate recognition of India’s ‘soft power’ yet again having declared 2nd October (Mahatma Gandhi’s birthday) as the International Day of Non-Violence in 2007. It is a matter of satisfaction and celebration. It may not be beyond a point to mention that it will only be appropriate, if India again takes yet another initiative to declare 14th April (birth day of Dr. B.R. Ambedkar) as International Day of Equality at the next UNGA in commemoration of the 125th birth anniversary of Dr. B.R. Ambedkar, the greatest son of India and the Messiah of the under privileged and suppressed humanity.  He stood, unflinchingly, for Equality, Liberty and Fraternity, the lofty ideals of Mahatma Buddha, yet another Indian who will remain in celebration for generations to come.

International Yoga Day is being celebrated throughout the world under the aegis of the UN. The idea is to spread awareness about the mental and physical well being of mankind through Yoga, an ancient Indian science and method to do so. Last year PM Narendra Modi spoke at the UNGA about the best cultural export of India, “Yoga is an invaluable gift of our ancient tradition," he said. "It is not about exercise but to discover oneness within yourself, the world and nature.” Subsequently, the UNGA adopted an India initiated resolution declaring June 21 as “International Day of Yoga. It is gratifying to note that this is for the first time that such an idea has been proposed and accepted by the UN in less than three months. It also speaks high of the Indian diplomacy. India’s proposed idea to declare April 14, birthday of Dr. B.R. Ambedkar as “International Day of Equality” will bring further laurels to India internationally and much appreciation and dividend to the government internally.

Needless and avoidable controversies on Yoga should be negated. First the government has already clarified that participation in International Day of Yoga is voluntary. The controversial elements like “Surya Namaskar” and recital of some “Mantras” has been taken off the official programme. Yoga is not related to any religion or political party. Yoga Guru Sri Sri Ravishankar has rightly said, “Yoga is universal as breathing is universal.” 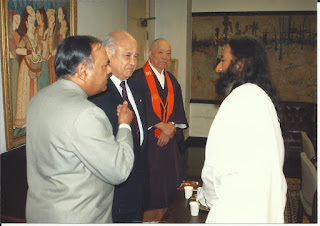 As musings of a novice, I may add that during the course of my long diplomatic career, I availed of many opportunities 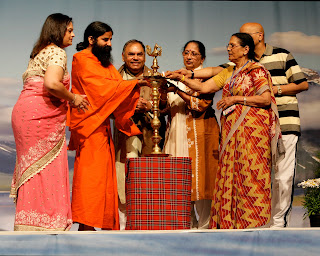 and associated myself with the propagation and spread of Yoga. In Tokyo, we interacted with Sri Sri Ravishankar’s Art of Living and started the Yoga classes at the Indian Embassy in 2002. We worked with Baba Ramdev in Scotland in 2007-08. He invited me to inaugurate his Yoga Shivers (Camps) in Glasgow and Edinburgh which I did with pleasure. In 2009-10, we started Yoga classes at the Indian Embassy in Minsk (Belarus) on the initiative of an India trained Yoga teacher Natallia Gayatri and her husband Sree Kumar. It was a satisfying experience.

With this, I greet my fellow Indians and the international community at large on International Yoga Day.
Posted by ramesh chander at 7:56 AM