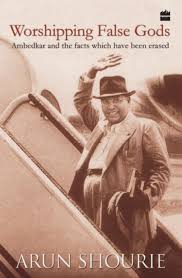 One may recall that Arun Shourie’s book ‘Worshipping False Gods – Ambedkar, and the facts which have been erased’ published in 1997 generated considerable heat and controversy in India. I also read some of the reviews of the book and vehement protests by the followers of Dr. B.R. Ambedkar, in the aftermath of the book. Arun Shourie being a known columnist, journalist, writer and an intellectual and on account of my own interest in Dr. Ambedkar, I wanted to read the book but somehow I could not do so till recently. The book is at hand and I finished reading it just recently.


I was disappointed. The stock of Arun Shourie went down in my estimation of him. During my diplomatic service, I happened to meet him twice in Tokyo. Once I accompanied him to a meeting with UNSG Kofi Annan during a conference on aid to Afghanistan in 2003. I found him intelligent and articulate.  Arun Shourie is entitled to his views like anyone else. But it appeared to me that he is totally biased against Dr. B.R. Ambedkar. The lack of substantive arguments and material, however, resulted in making the book of 664 pages. I have found that one third of 664 pages of the book are quotes from the speeches and writings of Dr. Ambedkar, his fellow members in the Constituent Assembly, correspondence and dispatches of high ranking British functionaries and so on. I think his main grudge is why the Government of Maharashtra listed the Constitution of India as one of the works of Dr. B.R. Ambedkar. Arun Shourie dedicated the book to ‘For those few who speak the truth to the people also’. But going through the book one gets the feeling that the author is trying to shroud and hide the truth with the help of his ‘scholarly rigour’ like a trained prostitute trying to hide her modesty with her professional skills.


Arun Shourie has labored hard to say that Ambedkar was not a freedom fighter. But the question remained that Ambedkar never claimed that he was a freedom fighter. He clearly set his goal and said, “I have never claimed to be a universal leader of the suffering humanity. The problem of untouchables is quite enough for my slender strength. I do not say that other causes are not equally noble. But knowing that life is short, one can only serve one cause and I have never aspired to do more than serve the untouchables.” Mahatma Gandhi and the Congress Party were his political adversaries. Why should he have sung praises of them and cooperated with them? I don’t understand the argument of Arun Shourie. The writer has objections to Dr. Ambedkar becoming the Minister/Member of the Viceroys Council. Again it is not understandable. Why Dr. Ambedkar should not have accepted the coveted position offered to him particularly when the discriminatory and casteist society was not inclined to recognize his ability and position to represent the interests of untouchables? Arun Shourie has repeatedly quoted in the book that Dr. Ambedkar was of the view that the untouchables supported establishing the British Raj in India in the battles of Plassey and Kirkee. What was wrong in doing so? The untouchables were not worthy of sitting near the high caste Hindus. They were not fit to be in the armies of the high caste Rajas and Maharajas. Why should they have not accepted the jobs in the British army and earn their bread with dignity? Dr. Ambedkar was a nationalist to the core but his priorities were different.  “Beware of false knowledge. It is more dangerous than ignorance”, said George Bernard Shaw.  The twisted facts, as the book shows, are even more dangerous.


Arun Shourie has tried his best to explain that Dr. Ambedkar was not a social reformer either. It is surprising that in the analysis, he praises Mahatma Gandhi and his Harijan Sewak Sangh, Gandhi’s cosmetic efforts against untouchability etc. It is a new-found love just to corner and downsize Dr. Ambedkar. Otherwise, I don’t think Arun Shourie, being a staunch RSS and Jan Sangh/BJP man, has any love lost for Mahatma Gandhi or Congress. Dr. Ambedkar’s efforts to educate and reform the dalit community and the entire society at large is well documented. His earnest desire and efforts to reform the society through the Hindu Code Bill may not be ignored by the genuine historians easily.


Arun Shourie is not inclined to accept Dr. Ambedkar as the ‘Manu of our times’. I think Dr. Ambedkar would have or must have hated this expression that is calling him the modern Manu. Dr. Ambedkar was dead against Manu and Manuwad.  The major grudge which Arun Shourie has against Dr. Ambedkar is  why is it said and believed that he was the father of India’s constitution?  Dr. Ambedkar never claimed that honour at anytime. Keeping with the desirable modesty, he always said that he was a small cog in the wheel of the long process. It was the President of the Constituent Assembly Babu Rajinder Prasad, PM Jawaharlal Nehru and most of the honourable members of the Constituent Assembly who acclaimed and appreciated the work and contribution of Dr. Ambedkar in this regard. Arun Shourie has quoted at length and I quote only one. This is what Pattabhi Sitarmmaiyya, speaking in the Constituent Assembly, said, “What a stream-roller intellect he brought to bear upon this magnificent task: irresistible, indomitable, unconquerable leveling down tall palms and short poppies; whatever he felt be right, he stood by, regardless of consequences.”  Some people with Manuwadi attitude are unable to digest the honours bestowed on Dr. Ambedkar. They try to belittle the status and position of Dr. Ambedkar by saying that it was Mahatma Gandhi, Sardar Patel, Pandit Nehru and even Jagjivan Ram who were instrumental in bringing Dr. Ambedkar to the Constituent Assembly as if he did not fit the bill otherwise and was a non entity. He was made the Chairman of the Drafting Committee just for nothing. The upper-hand mentality of the casteist mindsets are at work, it is evident. That is why they cannot see above their noses. Why were all these worthies falling over each other in favouring and accommodating Dr. Ambedkar for such an important task of constitution making? No one, of the likes of Arun Shourie, has the answer. In spite of this attempt of Arun Shourie of character assassination, that too posthumous, historians and intellectuals from the cross sections of the society declared Dr. Ambedkar as the Greatest Indian as recent as August 2012. Arun Shourie must be sulking. The Drafting Committee, under the Chairmanship of Dr. Ambedkar, drafted, steered and piloted the constitution in the Constituent Assembly. He did a splendid job which has been duly recognized by the people of India. It is preposterous to suggest and undermine the role of Dr. Ambedkar and say that his role in the process was worthless and marginal. Only a totally biased mind can think of that.


The last chapters of the book suggest ‘Invention, Intimidation, Assault’ unleashed by the followers and the dalit masses against “few who speak the truth”.  It again indicates the mindset only. How can the lowly of the low question all the knowledgeable and powerful Manuwadis? Arun Shourie has termed criticism of his manuwadi ideas as “verbal terrorism”. In fact, his book ‘Worshipping False Gods’ may be termed as intellectual terrorism perpetrated against one of the greatest sons of India and that too long after his death. The title of the book has mentioned about “the facts which have been erased”. Which facts? And who has erased those facts.  The poor followers of Dr. Ambedkar do not have that strength to erase the facts. Yes, some manuwadi intellectuals are trying to create new facts. Most probably they would not succeed. In fact, the colleagues and friends of the author in BJP and RSS are interested in strengthening and supporting the facts which make Dr. Ambedkar a true nationalist, father of the Indian constitution and a great social reformer.


Interestingly, on the front and back cover pages are given two  photographs of Dr. Ambedkar wearing hats and English clothes. It is a subtle attempt to show that Dr. Ambedkar was an English man in his thinking and living. Though it is a small point yet it may be added that Dr. Ambedkar used to normally wear Sherwani-Churidar, Bandgala suits, Kurta Pyjama/dhoti as required, befitting the occasion. In fact, Dr. Ambedkar was a well dressed man always at his sartorial elegance.


It is gratifying to note that Arun Shourie could not succeed in denting the exalted personality of Dr. B.R. Ambedkar. The book “Worshipping False Gods – Ambedkar, and the facts which have been erased” generated considerable heat but did not throw any light to educate the discerning readership.

Posted by ramesh chander at 2:47 PM