Khushwant Singh (1915-2014), a much revered journalist and columnist, passed away on March 20, 2014 at the ripe age of 99. Khuswant Singh was also an accomplished historian of Sikh history and also a recognized novelist. He will be greatly missed in the enlightened circles of the society at large. I liked Khushwant Singh from my young days. I used to read the Illustrated Weekly regularly in the library of DAV College, Jalandhar, my alma mater. I read or glanced through most of the books subsequently besides reading his regular columns ‘This Above All’ and ‘Malice towards One and All’ with great interest. I may or may not have agreed with him but I felt like reading him. I have had the opportunity to meet him briefly during my diplomatic duties at a Reception at the then Yugoslavia Embassy in New Delhi sometime in 1991. He was casually dressed in a Pathani suit. As he was rightly puncturing many egos in his writings, I found him totally relaxed and without any airs of a great scholar and journalist. He created a persona for himself as a dirty old man interested in sex, scotch and easy life. But in reality he was a modest and serious man in his personal life. I wrote about Khuswant Singh many a times in this Blog. Khushwant Singh was a great man.


I was in Delhi on March 20. My daughter Vaishali gifted me Khushwant Singh’s book ‘Khushant Singh – Obituaries – Death at my doorstep’. I had read many of the articles compiled in the book. Khushwant Singh wrote his own obituary when he was young and wrote “I will like to be remembered as someone who made people smile.” He proved to be so and wrote many joke books. In his regular columns he included good jokes sent to him by his readers and admirers. He wrote his own Epitaph: 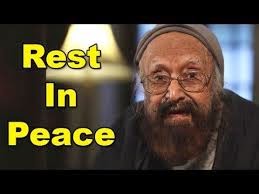 Here lies one who spared neither man nor God;
Waste not your tears on him, he was a sod.
Writing nasty things he regarded as great fun;
Thank the Lord he is dead this son of a gun.


I have found that in many of his obituaries he quoted Allma Iqbal’s lofty poetry:


(Why did you order me out of the garden of paradise? I have a lot of work that remains unfulfilled, now you better wait for me)


I think Khuswant Singh made God to wait till he reached 100 years and completed his job of enlightening and entertaining through his books and columns.

Posted by ramesh chander at 8:02 AM